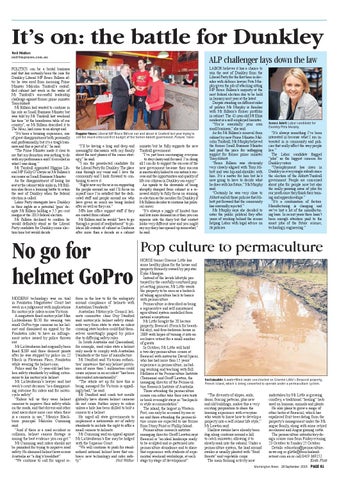 It’s on: the battle for Dunkley Neil Walker neil@mpnews.com.au POLITICS can be a brutal business and that has certainly been the case for Dunkley Liberal MP Bruce Billson after he was axed from incoming Prime Minister Malcolm Turnbull’s reshuffled cabinet last week in the wake of Mr Turnbull’s successful leadership challenge against former prime minister Tony Abbott. Mr Billson had wanted to continue in his role as Small Business Minister but was told by Mr Turnbull last weekend his time “at the boardroom table of our country”, as Mr Billson described it to The News, had come to an abrupt end. “It’s been a bruising experience, one of great disappointment both personally and professionally, but it’s a tough business and this is part of it,” he said. “The Prime Minister made it clear to me that my demotion was nothing to do with my performance and I’d excelled in what I was doing.” Mr Turnbull appointed Higgins Liberal MP Kelly O’Dwyer as Mr Billson’s successor as Small Business Minister. As the disappointment of losing his seat at the cabinet table sinks in, Mr Billson also faces a looming battle to retain the seat of Dunkley when the federal election is called. Labor Party strategists have Dunkley in their sights as a potential ‘gain’ despite Mr Billson holding a 5.5 per cent margin at the 2013 federal election. Mr Billson declined to confirm he would definitely stand as the Liberal Party candidate for Dunkley come election time but would decide

ALP challenger lays down the law

“I’ll be having a long and deep and meaningful discussion with my family about the next phases of the career strategy,” he said. “I am the preselected candidate for the Liberal Party for Dunkley. The place runs through my veins and I love the community and I look forward to continuing to serve it. “Right now my focus is on supporting the people around me and I’ll focus on myself once I’m satisfied that the dedicated staff and people around me who have given so much are being looked after as well as they can.” MPs lose office support staff if they are ousted from cabinet. Mr Billson said he would “have to go through a period of readjustment” to political life outside of cabinet in Canberra after more than a decade as a cabinet

No go for helmet GoPro MODERN technology was on trial in Frankston Magistrates’ Court last week in a judgement with implications for motorcycle riders across Victoria. A magistrate fined motorcyclist Max Lichtenbaum $150 for wearing two small GoPro-type cameras on his helmet and dismissed an appeal by the Frankston rider to have an infringement notice issued by police thrown out. Mr Lichtenbaum had originally been fined $289 and three demerit points after he was stopped by police on 22 March in Plowman Place, Frankston while wearing the helmet-cam. Police said the 55-year-old had broken safety standards by adding extensions to his motorcycle helmet. Mr Lichtenbaum’s lawyer said last week’s court decision “is a disappointing outcome for riders and for motorcycle safety”. “Riders tell us they wear helmet cameras to improve their safety while on the roads, and that drivers and other road users show more care when there is a camera in use,” Maurice Blackburn principal Malcolm Cumming said. “And if there is a road accident or collision, helmet camera footage is among the best evidence you can get.” Mr Cumming said riders should not be punished for trying to improve road safety. He slammed helmet laws across Australia as “a dog’s breakfast”. “We continue to call for urgent re-

form in the law to fix the ambiguity around compliance of helmets with Australian Standards.” Australian Motorcycle Council helmets committee chair Guy Stanford said motorcycle helmet safety standards vary from state to state so riders crossing state borders could find themselves unwittingly pinged by police due to differing safety rules. In South Australia and Queensland, for example, road rules state a helmet only needs to comply with Australian Standards at the time of manufacture. Mr Stanford said Victorian authorities’ insistence that any helmet protrusion of more than 5 millimetres could cause injuries in an accident “has been discounted internationally”. “The whole set up for how this is being managed for Victoria is appallingly bad,” he said. Mr Stanford said crash test results globally have shown helmet cameras do not cause further injury to riders unless a hole has been drilled to bolt a camera to a helmet. He urged all state governments to implement a nationwide set of safety standards to include the right to affix a small camera to helmets. Mr Cumming said an appeal against Mr Lichtenbaum’s fine may be lodged with the Supreme Court. “We will continue to push for standardised national helmet laws that embrace new technology and rider safety.” Neil Walker

minister but he fully supports the new Turnbull government. “I’ve just been encouraging everyone … to stay classy and focused. I’m doing all I can do to support the success of the new government because their success is inextricably linked to our nation’s success and the opportunities and quality of life our citizens in Dunkley can enjoy.” An upside to the downside of being abruptly dumped from cabinet is a renewed ability to fully focus on winning re-election as the member for Dunkley if Mr Billson decides to continue his political career. “It’s always a juggle of limited time and lots more demand on it than you can squeeze into the diary but that contest looks very different now and you might say my diary has opened up somewhat,” he said.

LABOR believes it has a chance to win the seat of Dunkley from the Liberal Party for the first time in decades with defence lawyer Peta Murphy given the job of attacking sitting MP Bruce Billson’s majority at the next federal election due to be held in January next year at the latest. Despite standing on different sides of politics Ms Murphy is familiar with Mr Billson’s former portfolio in cabinet. The 42-year-old Mt Eliza resident is a self-employed barrister. “You’re essentially your own small business,” she said. As for Mr Billson’s removal from cabinet by new Prime Minister Malcolm Turnbull, Ms Murphy believed the former Small Business Minister had paid the price for unflagging support for former prime minister Tony Abbott. “Bruce Billson was obviously very closely aligned with Tony Abbott and was hip-and-shoulder with him. It’s a matter for him but he’s now going to have to decide what he does with his future,” Ms Murphy said. “Certainly he was very close to Abbott and all those policies that Abbott put forward that the community has resoundly rejected.” Ms Murphy says she decided to enter the public political fray after years of working behind the scenes helping Labor with legal advice on its policies.

“It’s always something I’ve been interested in because what I am interested in is community and policies that really affect the way people live.” The Labor candidate flagged “jobs” as the biggest concern for Dunkley voters. “Unemployment has risen in Dunkley in every single suburb since the election of the Abbott-Turnbull government. People are concerned about jobs for people now but also the really pressing issue of jobs for our youth once they finish their training and apprenticeships.” “It’s a combination of factors. Manufacturing is changing and we’ve lost a lot of the manufacturing base. In recent years there hasn’t been enough attention paid to the smart jobs of the future: science, technology, engineering.”

Pop culture to permaculture HORSE trainer Graeme Little has some healthy plans for the house and property formerly owned by pop star Kylie Minogue. Instead of the lavish lifestyle portrayed by the carefully courtured pop jet-setting princess, Mr Little wants the property to be seen as a bedrock of taking agriculture back to basics with permaculture. Permaculture is described as being a regenerative and self-maintained agricultural system modelled from natural ecosystems. Mr Little bought the 20 hectare property, Beauciel (French for beautiful sky), and four-bedroom house in 2009 with hopes of turning it into an exclusive retreat for a small number of guests. In October, Mr Little will hold a two-day permaculture course at Beauciel with instructor David Spicer, who has had more than 15 years’ experience in permaculture, including working and teaching with Bill Mollison at the Permaculture Institute (Tasmania) and Geoff Lawton, the managing director of the Permaculture Research Institute of Australia. Those attending the permaculture course can either take their own tents or book overnight stays in “backpacker style accommodation”. The island, the largest in Western Port, can only be accessed by sea or air and those attending the permaculture course are expected to use ferries from Stony Point or Phillip Island. Permaculture research institute managing director Geoff Lawton says Beauciel is “an ideal landscape ready to be sculpted and re-patterned into permaculture abundance and to share that experience with students of experiential weekend workshops, at each stage by stage of development”.

Sustainable: A water-filled swale constructed on Graeme Little’s Beauciel property, French Island, which is being converted to operate under a permaculture system.

“The diversity of slopes, soils, dams, fencing patterns, plus new and old buildings, makes this a very exciting proposition to share the learning experience with everyone who wants to know how to develop a property into a self-reliant life style,” Mr Lawton said. Shallow swales have already been dug along contours around a hill to catch rainwater, allowing it to slowly soak into the subsoil. Under a permaculture system, the land around swales is usually planted with “food forests” and vegetable crops. The main farming activity now

undertaken by Mr Little is growing comfrey, a traditional “healing” herb used on humans, animals and plants. He also plans to grow a range of other herbs at Beauciel, which has espaliered fruit trees dating from the property’s management under the Minogue family, along with some retired racehorses and Angus grazing cattle. The permaculture introductory design course runs from Friday evening 23 October to Sunday 25 October. Details: education@permaculturenews.org or glittle@frenchislandretreat.com.au or call 0419 369252. Keith Platt