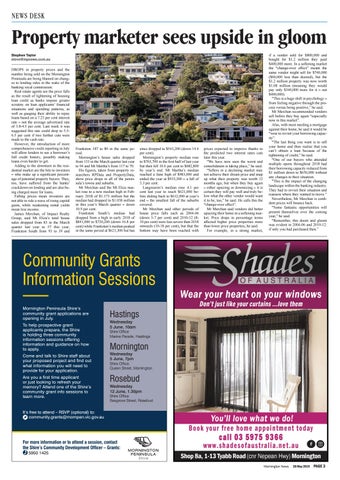 Property marketer sees upside in gloom Stephen Taylor steve@mpnews.com.au DROPS in property prices and the number being sold on the Mornington Peninsula are being blamed on changes to lending rules in the wake of the banking royal commission. Real estate agents see the price falls as the result of tightening of housing loan credit as banks impose greater scrutiny on loan applicants’ financial situations and spending patterns, as well as gauging their ability to repay loans based on a 7.25 per cent interest rate – not the average advertised rate of 3.8-4.5 per cent. Last week it was suggested this rate could drop to 5.56.5 per cent if two further cuts were made to the cash rate. However, the introduction of more comprehensive credit reporting in July will allow lenders to see a borrower’s full credit history, possibly making loans even harder to get. Adding to the downturn in the residential market are the hits to investors – who make up a significant percentage of potential property buyers. They, too, have suffered from the banks’ crackdown on lending and are also being charged more for loans. Falling prices mean investors are not able to ride a wave of rising capital gains, while weakening rental yields mean less income. James Merchan, of Impact Realty Group, said Mt Eliza’s total house sales dropped from 83 in the March quarter last year to 57 this year; Frankston South from 93 to 39 and

prices expected to improve thanks to the predicted two interest rates cuts later this year. “We have now seen the worst and consolidation is taking place,” he said. “Sellers in a declining market may not achieve their dream price and snap up what their property was worth 12 months ago, but when they buy again – either upsizing or downsizing – it is certain they will pay well and truly below what the other vendor would want it to be, too,” he said. He calls this the “change-over effect”. Mr Merchan said vendors did better upsizing their home in a softening market. Price drops in percentage terms affected higher price properties more than lower price properties, he said. For example, in a strong market,

if a vendor sold for $800,000 and bought for $1.2 million they paid $400,000 more. In a softening market the “change-over effect” meant the same vendor might sell for $740,000 ($60,000 less than desired), but the $1.2 million property was now worth $1.08 million (meaning they would pay only $340,000 more for it – not $400,000). “This is a huge shift in psychology – from feeling negative through the process versus being positive,” he said. Mr Merchan recommended vendors sell before they buy again “especially now in this market”. Also, with most needing a mortgage against their home, he said it would be “wise to revisit your borrowing capacity”. “The last thing you want is to sell your home and then realise that you can’t obtain a loan because of the tightening of credit,” he said. “One of our buyers who attended multiple opens throughout 2018 had their borrowing capacity reduced from $1 million down to $650,000 without any changes to their situation. “This is the impact of the changing landscape within the banking industry. They had to revisit their situation and reassess where they wanted to move.” Nevertheless, Mr Merchan is confident prices will bounce back. “Some fantastic opportunities will present themselves over the coming year,” he said. “Remember, this doom and gloom was evident in 2004-06 and 2010-12: if only you had purchased then.”

Wear your heart on your windows Don’t just like your curtains ...love them

Come and talk to Shire staff about your proposed project and find out what information you will need to provide for your application.

Are you a first time applicant or just looking to refresh your memory? Attend one of the Shire’s community grant info sessions to learn more.

You’ll love what we do!