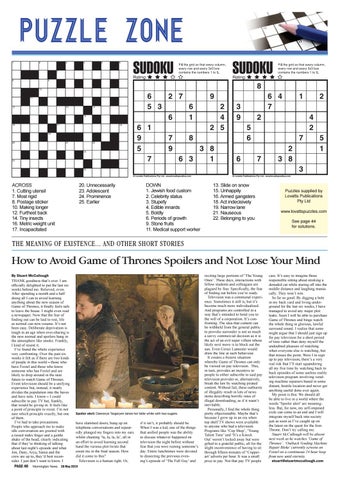 How to Avoid Game of Thrones Spoilers and Not Lose Your Mind By Stuart McCullough THANK goodness that’s over. I am officially delighted to put the last six weeks behind me. Relieved, even. After spending a month and a half doing all I can to avoid learning anything about the new season of Game of Thrones, it finally feels safe to leave the house. I might even read a newspaper. Now that the fear of finding out can be laid to rest, life as normal can now resume. It’s not been easy. Deliberate deprivation is tough in an age when over-sharing is the new normal and spoilers hang in the atmosphere like smoke. Frankly, I kind of resent it. I’ve found the whole experience very confronting. Over the past six weeks it felt as if there are two kinds of people in this world – those who have Foxtel and those who know someone who has Foxtel and are likely to drop around in the near future to watch Game of Thrones. Event television should be a unifying experience but, instead, it neatly divides the population into the haves and have nots. I know – I could subscribe to pay TV but, frankly, that would be giving in. It feels like a point of principle to resist. I’m not sure which principle exactly, but one of them. I’ve had to take precautions. People who approach me to make idle conversation are greeted with a raised index finger and a gentle shake of the head; clearly indicating that if they’re thinking of talking about last night’s episode and what Jon, Dany, Arya, Sansa and the crew are up to, they’d best reconsider. I just don’t want to know. I

have slammed doors, hung up on telephone conversations and repeatedly plunged my fingers into my ears whilst chanting ‘la, la, la, la’, all in an effort to avoid learning second hand the various plot twists that await me in the final season. How did it come to this? Television is a human right. Or,

if it isn’t, it probably should be. When I was a kid, one of the things that unified people was the ability to discuss whatever happened on television the night before without fear that you were ruining someone’s day. Entire lunchtimes were devoted to dissecting the previous evening’s episode of ‘The Fall Guy’ and

reciting large portions of ‘The Young Ones’. These days, interactions with fellow students and colleagues are plagued by fear. Specifically, the fear of finding out before you’re ready. Television was a communal experience. Sometimes it still is, but it’s become much more individualised. And programs are controlled in a way that’s intended to bend you to the will of a corporation. It’s confronting. The idea that content can be withheld from the general public to provoke surrender is not so much a savvy commercial decision as it is the act of an evil super villain whose likely next move is to block out the sun. Even Cersei Lannister would draw the line at such behaviour. It creates a bizarre situation whereby Game of Thrones can only be viewed on pay television. This, in turn, provides an incentive to people to either subscribe to said pay television provider or, alternatively, break the law by watching pirated content. Without fail, these outbursts of illegality result in lots of news items describing horrific rates of illegal downloading, as if it wasn’t inevitable. Personally, I find the whole thing pretty objectionable. Maybe that’s because I grew up in an era when top shelf TV shows were available to anyone who had a television. Programs like ‘Cop Shop’, ‘Young Talent Time’ and ‘It’s a Knock Out’ weren’t locked away but were gifted to a grateful public, all for the slight inconvenience of having to sit through fifteen minutes of ‘Copperart’ adverts per hour. It was a small price to pay. Not that pay TV people

care. It’s easy to imagine those responsible sitting about stroking a denuded cat while staring off into the middle distance and laughing maniacally. They won’t win. So far so good. By digging a hole in my back yard and living underground for the last six weeks, I have managed to avoid any major plot leaks. Soon I will be able to purchase Game of Thrones and binge watch the whole thing in glorious, lawful surround sound. I realise that some might argue that I should just sign up for pay television for a short period of time rather than deny myself the undoubted pleasure of watching when everyone else is watching, but that misses the point. Were I to sign up to pay television, there’s a very real risk that I’ll start squandering all my free time by watching back to back episodes of some useless reality television program involving vending machine repairers based in some distant, hostile location and never get anything useful done ever again. My point is this: We should all be able to live in a world where the words ‘Spoiler alert’ are meaningless. But, for now, my self-imposed exile can come to an end and I will integrate myself back into society just as soon as I’ve caught up on the latest on the quest for the Iron Throne. Don’t try calling me. Stuart McCullough will be absent next week as he watches ‘Game of Thrones’. ‘Outback Vending Machine Repair Bloke’ currently screens on Foxtel on a continuous 24 hour loop from now until eternity. stuart@stuartmccullough.com