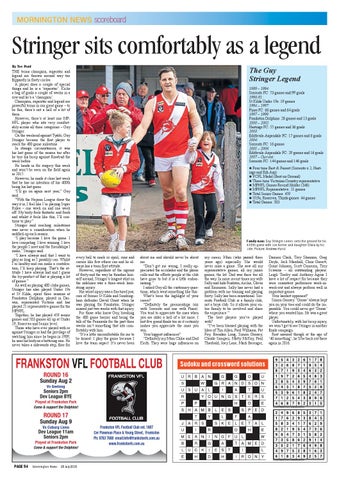 Stringer sits comfortably as a legend By Toe Punt THE terms champion, superstar and legend are thrown around way too flippantly in footy circles. A player does a couple of special things and he is a ‘superstar’. Kicks a bag of goals a couple of weeks in a row and he’s a ‘champion’. Champion, superstar and legend are powerful terms in our great game – to be fair, there’s not a hell of a lot of them. However, there’s at least one MPNFL player who sits very comfortably across all three categories – Guy Stringer. On the weekend against Tyabb, Guy Stringer became the first player to reach the 400 game milestone. In strange circumstances, it was his last game of the season too after he tore his bicep against Rosebud the week before. He heads in for surgery this week and won’t be seen on the field again in 2015. However, he made it clear last week that he has no intention of his 400th being his last game. “I’ll go on again next year,” Guy said. “With the Nepean League draw the way it is, I feel like I’m playing Super Rules – one week on and one week off. My body feels fantastic and fresh and whilst it feels like this, I’ll continue to play.” Stringer said reaching milestones was never a consideration when he saddled-up each season. “I play because I love the game. I love competing. I love winning. I love the people I meet and the friendships I make,” Stringer said. “I have always said that I want to play as long as I possibly can. Whilst I’m healthy and can make a contribution, I’ll keep playing. That’s the attitude I have always had and I guess the by-product of that is playing a lot of games.” As well as playing 400 clubs games, Stringer has also played Under 19s at St Kilda, spent three seasons at Frankston Dolphins, played in Darwin, represented Victoria and has played 21 representative games for the MPNFL. Together, he has played 459 senior games and 503 games all up at Under 19, Reserves and Senior level. Those who have ever played with or against Stringer or had the privilege of watching him since he began in 1989, he uses his body as a battering ram. He never takes a sidewards step, flies for

Family man: Guy Stringer comes onto the ground for his 400th game with son Archie and daughter Olivia by his side. Picture: Andrew Hurst

every ball to mark or spoil, runs and carries like few others can and he always has a team first attitude. However, regardless of the rigours of footy and the way he thrashes himself around, Stringer’s longest stint on the sidelines was a three-week hamstring injury. His worst injury was a fractured jaw, care of former St Kilda and Sandringham defender David Grant when he was playing for Frankston. Stringer missed just two weeks with that injury. For those who know Guy, breaking the 400 game barrier and being the talk of the Peninsula for the past three weeks isn’t something that sits comfortably with him. “It’s a little uncomfortable for me to be honest. I play the game because I love the team aspect. It’s never been

about me and should never be about me. “Don’t get me wrong, I really appreciated the accolades and the phone calls and the efforts people at the club have gone to but it is a little embarrassing.” I asked Guy all the customary questions, which went something like this. What’s been the highlight of your career? “Definitely the premierships (six with Sorrento and one with Pines). You tend to appreciate the ones when you are older a hell of a lot more. I lost five grand finals too so it certainly makes you appreciate the ones you win. Your biggest influences? “Definitely my Mum Chloe and Dad Keith. They were huge influences on

ROUND 17 Sunday Aug 9 Vs Coburg Lions

my career, Mum (who passed three years ago) especially. She would never miss a game. She saw all my representative games, all my junior games, the lot. Dad was there too all the way. In more recent times my wife Sally and kids Rushton, Archie, Olivia and Emmison. Sally has never had a problem with me training and playing footy. Sally has been sensational. Sorrento Football Club is a family club, not a boys club. So it allows your entire family to be involved and share the experience.” The best players you’ve played with? “I’ve been blessed playing with the likes of Tim Allen, Paul Williams, Pat Foy, Brendan Long, Simon Goosey, Claude Samperi, Matty McKay, Paul Theobald, Joey Lane, Mark Berenger,

Damien Clark, Troy Shannon, Greg Doyle, Jack Marshall, Chris Garrett, Grant Johnson, Scott Cameron, Troy Scwarze – all outstanding players. Leigh Treeby and Anthony Agius I have a lot of respect for because they were consistent performers week-inweek-out and always perform well in important games. Your hardest opponent? Simon Goosey. ‘Goose’ always kept you on your toes and could do the impossible. You could never get ‘Goose’ where you wanted him. He was a great player. Unfortunately, with his bicep injury, we won’t get to see Stringer in another finals campaign. Rest assured though at the age of ‘40 something’, he’ll be back out there again in 2016.