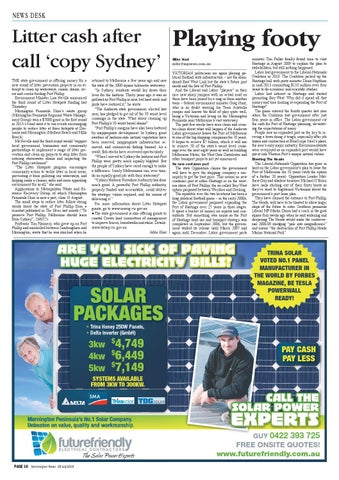 Litter cash after call â&amp;#x20AC;&amp;#x2DC;copy Sydneyâ&amp;#x20AC;&amp;#x2122; THE state government is offering money for a new round of litter prevention projects in an attempt to clean up waterways, canals, drains, rivers and creeks feeding Port Phillip. Environment Minister Lisa Neville announced the third round of Litter Hotspots funding last Thursday. Mornington Peninsula Shireâ&amp;#x20AC;&amp;#x2122;s waste group (Mornington Peninsula Regional Waste Management Group) won a $7000 grant in the first round in 2013-14 and used it to run events encouraging people to reduce litter at three hotspots at Dromana and Mornington (Mothers Beach and Mills Beach). Ms Neville said the third round would â&amp;#x20AC;&amp;#x153;support local government, businesses and community partnerships to implement a range of litter prevention and clean-up projects to stop litter from entering stormwater drains and impacting the Port Phillip catchmentâ&amp;#x20AC;?. â&amp;#x20AC;&amp;#x153;The Litter Hotspots program encourages community action to tackle litter in local areas, preventing it from polluting our waterways, and helping make a cleaner, safer and more appealing environment for us all,â&amp;#x20AC;? she said. Applications to Metropolitan Waste and Resource Recovery Group, of which Mornington Peninsula Shire is now a part, close 31 August. The small steps to reduce litter follow strong words about the state of Port Phillip from a scientist published in The News last month (â&amp;#x20AC;&amp;#x153;To preserve Port Phillip, Melbourne should learn from Sydneyâ&amp;#x20AC;?, 23/6/15). Professor Tim Flannery, who grew up on Port Phillip and snorkelled between Sandringham and Mornington, wrote that he was shocked when he

Playing footy Mike Hast mike@mpnews.com.au VICTORIAN politicians are again playing political football with infrastructure â&amp;#x20AC;&amp;#x201C; not the abandoned East West Link but the stateâ&amp;#x20AC;&amp;#x2122;s future port needs and the fate of Port Phillip. And the Liberal and Labor â&amp;#x20AC;&amp;#x153;playersâ&amp;#x20AC;? in their nice new shiny jumpers with no actual mud on them have been joined by a ring-in from another team â&amp;#x20AC;&amp;#x201C; federal environment minister Greg Hunt, who is no doubt wearing his Team Australia jumper and knows the field of play quite well, being a Victorian and living on the Mornington Peninsula near Melbourneâ&amp;#x20AC;&amp;#x2122;s vast waterway. The past few weeks have seen claim and counter-claim about what will happen if the Andrews Labor government leases the Port of Melbourne to one of the big shipping companies for 70 years. It hopes to receive $7 billion, which it will use to remove 50 of the stateâ&amp;#x20AC;&amp;#x2122;s worst level crossings over the next eight years as well as building Melbourne Metro, the West Gate Distributor and other transport projects not yet announced. No new container port The state Opposition claims the government will have to give the shipping company a monopoly to get the best price. This means no new container port at either Hastings or on the western shore of Port Phillip, the so-called Bay West option proposed between Werribee and Geelong. The squabble over the two locations has been a long political football game â&amp;#x20AC;&amp;#x201C; in the early 2000s, the Labor government proposed expanding the Port of Hastings over 25 years in three stages. It spent a bucket of money on reports and consultants. But something was amiss as the Port of Hastings land use and transport strategy was completed in September 2006, but the government stalled its release until March 2007 and again until December. Labor government ports