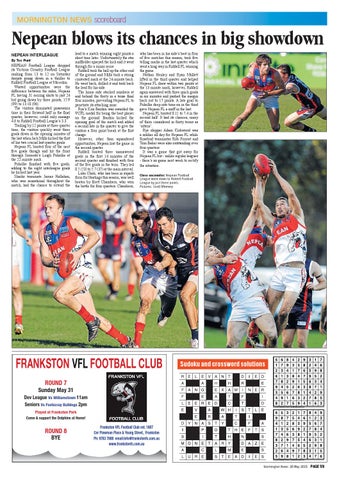 Nepean blows its chances in big showdown NEPEAN INTERLEAGUE By Toe Punt NEPEAN Football League dropped its Victoria Country Football League ranking from 13 to 12 on Saturday despite going down in a thriller to Riddell Football League at Mecedon. Wasted opportunities were the difference between the sides, Nepean FL having 31 scoring shots to just 24 but going down by three points, 15.9 (99) to 13.18 (96). The visitors dominated possession time in their forward half in the final quarter, however, could only manage 4.6 to Riddell Football League’s 3.3. Trailing by 12 points at three quarter time, the visitors quickly went three goals down in the opening minutes of the last when Jack Mills kicked the first of his two crucial last quarter goals. Nepean FL booted four of the next five goals though and hit the front through Sorrento’s Leigh Poholke at the 22-minute mark. Poholke finished with five goals, adding to the eight interleague goals he kicked last year. Sharks teammate James Hallahan, who was sensational throughout the match, had the chance to extend the

lead to a match winning eight points a short time later. Unfortunately the star midfielder sprayed the kick and it went through for a minor score. Riddell took the ball up the other end of the ground and Mills took a strong contested mark at the 24-minute back. He went back, drilled it and took back the lead for his side. The home side stacked numbers at and behind the footy in a tense final four minutes, preventing Nepean FL to penetrate its attacking zone. Rye’s Kris Bardon was awarded the VCFL medal for being the best player on the ground. Bardon kicked the opening goal of the match and added a second late in the quarter to give the visitors a four point break at the first change. However, other than squandered opportunities, Nepean lost the game in the second quarter. Riddell booted three unanswered goals in the first 14 minutes of the second quarter and finished with four of the five goals in the term. They led 8.5 (53) to 5.7 (37) at the main interval. Luke Clark, who has been in superb form for Hastings this season, was well beaten by Brett Chambers, who won the battle for four quarters. Chambers,

who has been in his side’s best in four of five matches this season, took five telling marks in the last quarter which went a long way in Riddell FL winning the game. Nathan Henley and Ryan Mullett lifted in the third quarter and helped Nepean FL draw within two points at the 13 minute mark, however, Riddell again answered with three quick goals in six minutes and pushed the margin back out to 17 points. A late goal to Poholke deep into time-on in the third gave Nepean FL a sniff in the last. Nepean FL booted 8.11 to 7.4 in the second half. It had its chances, many of them considered in footy terms as ‘sitters’. Rye skipper Adam Kirkwood was a soldier all day for Nepean FL while Rosebud teammates Rob Forrest and Tom Baker were also outstanding over four quarters. It was a game that got away for Nepean FL but - unlike regular leagues - there’s no game next week to rectify the situation. Close encounter: Nepean Football League went down to Riddell Football League by just three points. Pictures: Scott Memery

ROUND 7 Sunday May 31 Dev League Vs Williamstown 11am Seniors Vs Footscray Bulldogs 2pm Played at Frankston Park Come & support the Dolphins at Home!