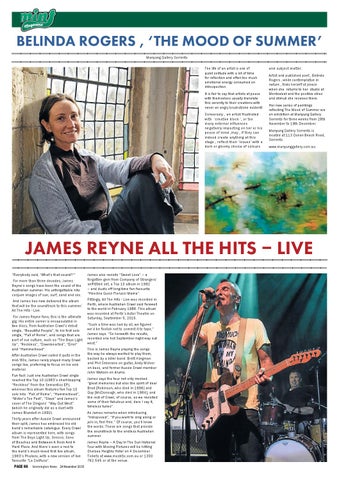 BELINDA ROGERS , ‘THE MOOD OF SUMMER’ Manyung Gallery Sorrento The life of an artist is one of quiet solitude with a lot of time for reflection and often too much emotional energy consumed on introspection. It is fair to say that artists at peace with themselves usually translate this serenity to their creations with never an angry brushstroke evident! Conversely , an artist frustrated with ‘creative block ‘, or too many external influences negatively impacting on her or his peace of mind ,may , if they can indeed create anything at this stage , reflect their ‘issues’ with a dark or gloomy choice of colours

and subject matter. Artist and published poet , Belinda Rogers , while contemplative in nature , finds herself at peace when she returns to her studio at Montsalvat and the positive vibes and stimuli she receives there. Her new series of paintings reflecting The Mood of Summer are on exhibition at Manyung Gallery Sorrento for three weeks from 28th November to 19th December. Manyung Gallery Sorrento is located at 113 Ocean Beach Road, Sorrento. www.manyunggallery.com.au

JAMES REYNE ALL THE HITS  LIVE “Everybody said, ‘What’s that sound?’” For more than three decades, James Reyne’s songs have been the sound of the Australian summer. His unforgettable hits conjure images of sun, surf, sand and sex. And James has now delivered the album that will be the soundtrack to this summer: All The Hits - Live. For James Reyne fans, this is the ultimate gig. His entire career is encapsulated in two discs, from Australian Crawl’s debut single, “Beautiful People”, to his first solo single, “Fall of Rome”, and songs that are part of our culture, such as “The Boys Light Up”, “Reckless”, “Downhearted”, “Errol” and “Hammerhead”. After Australian Crawl called it quits in the mid-’80s, James rarely played many Crawl songs live, preferring to focus on his solo material. Fun fact: Just one Australian Crawl single reached the Top 10 (1983’s chart-topping “Reckless” from the Semantics EP), whereas this album features five Top 10 solo hits: “Fall of Rome”, “Hammerhead”, “Motor’s Too Fast”, “Slave” and James’s cover of The Dingoes’ “Way Out West” (which he originally did as a duet with James Blundell in 1992). Thirty years after Aussie Crawl announced their split, James has embraced his old band’s remarkable catalogue. Every Crawl album is represented here, with songs from The Boys Light Up, Sirocco, Sons of Beaches and Between A Rock And A Hard Place. And there’s even a nod to the band’s much-loved first live album, 1983’s Phalanx, with a new version of live favourite “La Califusa”.

James also revisits “Sweet Love” – a forgotten gem from Company of Strangers’ self-titled set, a Top 10 album in 1992 – and dusts off long-time fan favourite “Hoochie Gucci Fiorucci Mama”. Fittingly, All The Hits - Live was recorded in Perth, where Australian Crawl said farewell to the world in February 1986. This album was recorded at Perth’s Astor Theatre on Saturday, September 5, 2015. “Such a time was had by all, we figured we’d be foolish not to commit it to tape,” James says. “So herewith the results, recorded one hot September night way out west.” This is James Reyne playing the songs the way he always wanted to play them, backed by a killer band: Brett Kingman and Phil Ceberano on guitar, Andy McIvor on bass, and former Aussie Crawl member John Watson on drums. James says the tour not only invoked “great memories but also the spirit of dear Brad [Robinson, who died in 1996] and Guy [McDonough, who died in 1984], and the rest of Crawl, of course, as we revisited some of their fabulous and, dare I say it, timeless tunes”. As James remarks when introducing “Indisposed”, “If you want to sing along or join in, feel free.” Of course, you’ll know the words. These are songs that provide the soundtrack to the endless Australian summer. James Reyne – A Day In The Sun National Tour with Moving Pictures will be hitting Chelsea Heights Hotel on 4 December. Tickets at www.moshtix.com.au or 1300 762 545 or at the venue.