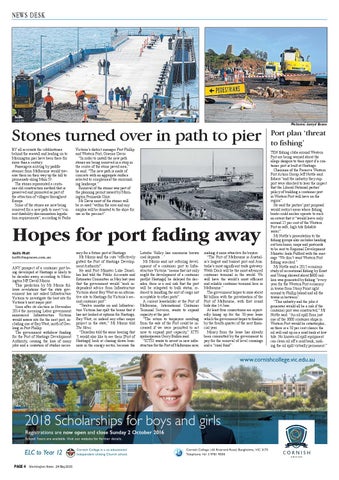 Stones turned over in path to pier BY all accounts the cobblestones behind the seawall and leading on to Mornington pier have been there for more than a century. Passengers arriving by paddle steamer from Melbourne would traverse them on their way up the hill to promenade along Main St. The stones represented a centuries old construction method that is preserved and promoted as part of the attraction of villages throughout Europe. Some of the stones are now being removed for a new path to meet “current disability discrimination legislation requirements”, according to Parks

Victoria’s district manager Port Phillip and Western Port, Graeme Davis. “In order to install the new path stones are being removed in a strip in the centre of the stone paved area,” he said. “The new path is made of concrete with an aggregate surface selected to complement the surrounding landscape.” Removal of the stones was part of the planning permit issued by Mornington Peninsula Shire. Mr Davis most of the stones will be re-used “within the area and any surplus will be donated to the shire for use in the precinct”.

Hopes for port fading away Keith Platt keith@mpnews.com.au ANY prospect of a container port being developed at Hastings is likely to be decades away, according to Mornington MP David Morris. This prediction by Mr Morris follows revelations that the state government has not asked Infrastructure Victoria to investigate the best site for Victoria’s next major port. Soon after its election in November 2014 the incoming Labor government announced Infrastructure Victoria would assess site for the next port, including one at Bay West, north of Geelong in Port Phillip. The government withdrew funding for the Port of Hastings Development Authority, causing the loss of many jobs and a cessation of studies neces-

sary for a future port at Hastings. Mr Morris said the cuts “effectively gutted the Port of Hastings Development Authority”. He said Port Minister Luke Donellan had told the Public Accounts and Estimates Committee in May last year that the government would “seek independent advice from Infrastructure Victoria about Bay West as an alternative site to Hastings for Victoria’s second container port”. “Twelve months on and Infrastructure Victoria has spilt the beans that it has not looked at options for Hastings, Bay West, or indeed any other major project in the state,” Mr Morris told The News. “Donellan told the same hearing that ‘I would also like to see them [Port of Hastings] look at chasing down business in the energy sector, because the

Latrobe Valley has enormous brown coal deposits…’ Mr Morris said not referring development of a container port to Infrastructure Victoria “means that not only might the development of a container port[at Hastings] be delayed for decades, there is a real risk that the port will be relegated to bulk status, reduced to handling the sort of cargo not acceptable to other ports”. A current leaseholder at the Port of Melbourne, International Container Terminal Services, wants to expand capacity at the port. “The return to taxpayers resulting from the sale of the Port could be increased if we were permitted to act now to expand port capacity,” ICTS spokesperson Gerry Bullon said. “ICTSI wants to invest in new infrastructure for the Port of Melbourne now,

making it more attractive for buyers. “The Port of Melbourne is Australia’s largest and busiest port and Australia’s most significant trade gateway. Webb Dock will be the most advanced container terminal in the world. We will have the world’s most efficient and reliable container terminal here in Melbourne.” The government hopes to raise about $6 billion with the privatisation of the Port of Melbourne, with first round bids due 14 June. At least four consortiums are reportedly lining up for the 50-year lease which the government hopes to finalise by the fourth quarter of the next financial year. Money from the lease has already been committed by the government to pay for the removal of level crossings and a “rural fund”.

Port plan ‘threat to fishing’ TEN fishing clubs around Western Port are being warned about the allege dangers to their sport if a container port is built at Hastings. Chairman of the Preserve Western Port Action Group Jeff Nottle said fishers “and the industry they support were shocked to hear the impact that the Liberal National parties’ policy of building a container port in Western Port will have on the region”. He said the parties’ port proposal would restrict areas where fishing boats could anchor operate to such an extent that it “would leave only around 25 per cent of the Western Port as safe, high tide fishable water”. Mr Nottle’s presentation to the fishing groups also includes handing out brochures, maps and postcards to be sent to Regional Development Minister Jaala Pulford with the message “We don’t want Western Port fishing wrecked.” Mr Nottle said a 2015 economic study of recreational fishing by Ernst and Young showed about $600 million was generated by fishing “every year for the Western Port economy in towns from Stony Point right around to Phillip Island and all the towns in between”. “This industry and the jobs it generates would all be a risk if the container port was constructed,” Mr Nottle said. “An oil spill from just one of the 3000 container ships in Western Port would be catastrophic, as there is a 50 per cent chance the oil will end up on a mud bank at low tide. No known oil spill equipment can clean oil off a mud bank, making the oil spill virtually permanent.”

2018 Scholarships for boys and girls Registrations are now open and close Sunday 2 October 2016 School Tours are available. Visit our website for further details.