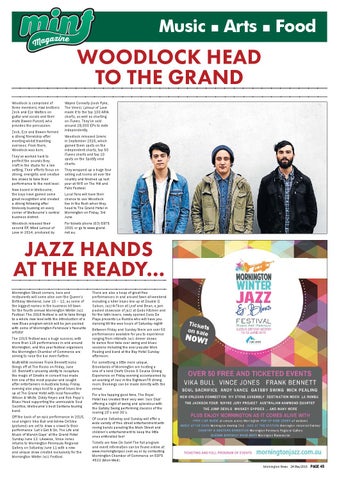 WOODLOCK HEAD TO THE GRAND Woodlock is comprised of three members; Kiwi brothers Zech and Eze Walters on guitar and vocals and their mate Bowen Purcell, who provides the percussion. Zech, Eze and Bowen formed a strong friendship after meeting whilst travelling overseas. From there, Woodlock was born. They’ve worked hard to perfect the sounds they craft in the studio for a live setting. Their efforts focus on strong, energetic and creative live shows to take their performance to the next level. Now based in Melbourne, the boys have gained some great recognition and created a strong following after tirelessly busking on every corner of Melbourne’s central business district. Woodlock released their second EP, titled Labour of Love in 2014, produced by

Wayne Connolly (Josh Pyke, The Vines). Labour of Love made it to the top 100 ARIA charts, as well as charting on iTunes. They’ve sold around 29,000 EPs to date independently. Woodlock released Sirens in September 2015, which gained them spots on the independent charts, top 50 iTunes charts and top 10 spots on the Spotify viral charts. They wrapped up a huge tour selling out rooms all over the country and finished up last year at NYE on The Hill and Falls Festival. Local fans will have their chance to see Woodlock live in the flesh when they head to The Grand Hotel in Mornington on Friday, 3rd June. For tickets phone (03) 5975 2001 or go to www.grand. net.au.

JAZZ HANDS AT THE READY… Mornington Street corners, bars and restaurants will come alive over the Queen’s Birthday Weekend, June 10 – 12, as some of the biggest names in the business hit town for the fourth annual Mornington Winter Jazz Festival. The 2016 festival is set to take things to a whole new level with the introduction of a new Blues program which will be jam packed with some of Mornington Peninsula’s favourite artists! The 2015 festival was a huge success, with more than 116 performances in and around Mornington, and this year festival organisers the Mornington Chamber of Commerce are aiming to raise the bar even further.

There are also a heap of great free performances in and around town all weekend including a killer blues line up at Double G Saloon, Jazz-A-Thon at Leaf and Bean, a jam packed showcase of jazz at Gods Kitchen and for the latin lovers, newly opened Casa De Playa presents La Rumba who will have you dancing till the wee hours of Saturday night! Between Friday and Sunday there are over 50 performances available for you to experience ranging from intimate Jazz dinner shows to dance floor take over swing and blues sessions including the ever popular Mick Pealing and band at the Bay Hotel Sunday afternoon.

Multi-ARIA nominee Frank Bennett kicks things off at The Rocks on Friday, June 10. Bennett’s uncanny ability to recapture the magic of Sinatra in concert has made him one of the most popular and sought after entertainers in Australia today. Friday evening also plays host to a great blues line up at The Grand Hotel with local favourites Wilson & White, Diddy Reyes and Rob Papp’s Blues Head supporting the unmissable Soul Sacrifice, Melbourne’s best Santana touring band.

For something a little more unique, Brooklands of Mornington are hosting a one of a kind Chefs Choice 5 Course Dining Experience on Friday evening accompanied by an evening of Jazz in the Eighteen78 dining room. Bookings can be made directly with the venue.

Off the back of an epic performance in 2015, soul singers Vika Bull and Adrew DeSilva (pictured) are set to draw a crowd to their performance ‘Let’s Get It On, The Life and Music of Marvin Gaye’ at the Grand Hotel Sunday June 12. Likewise, Vince Jones returns to Mornington Peninsula Regional Gallery on Saturday June 11 with a new and unique show created exclusively for the Mornington Winter Jazz Festival.

Of course Saturday and Sunday will offer a wide variety of free street entertainment with roving bands parading the Main Street and children’s entertainment to keep the little ones enthralled too!

For a toe tapping good time, The Royal Hotel has created their very own ‘Jazz Club’ offering a night of swing and splendour with the Gatsby Swing performing classics of the roaring 20’s and 30’s.

Tickets are Now On Sale! The full program and event information can be found online at www.morningtonjazz.com.au or by contacting Mornington Chamber of Commerce on 5975 4522 (Mon-Wed).

TICKETING AND FULL PROGRAM OF EVENTS