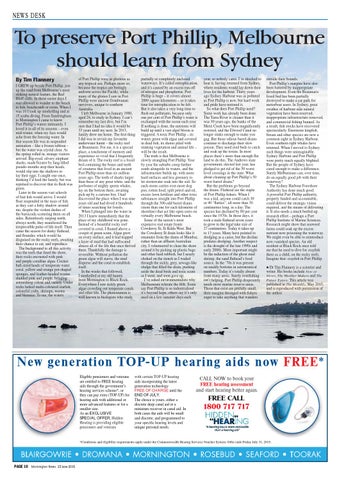 To preserve Port Phillip, Melbourne should learn from Sydney By Tim Flannery I GREW up beside Port Phillip, just up the road from Melbourne’s most striking natural feature, the Red Bluff cliffs. In those easier days I was allowed to wander to the beach to fish, beachcomb or swim. When I was 10 I took up snorkelling and at 15 scuba diving. From Sandringham to Mornington I came to know Port Phillip’s waters intimately. I loved it in all of its seasons – even mid-winter, when my face would ache from the freezing water. In that season life was in suspended animation – like a frozen tableau – but the water was crystal clear. As the spring rolled in, strange visitors arrived. Big-eyed, silvery elephant sharks, made bizarre by fang-filled pseudo-mouths atop their heads, would slip into the shallows to lay their eggs. I caught one once, thinking I’d feed the family, but was repulsed to discover that its flesh was green. Later in the season vast schools of bait fish would arrive. I would float suspended in the mass of fish as they cast a fishy shadow around me, despite the violent dashes of the barracuda scattering them on all sides. Relentlessly surging north, always north, they manifested the irrepressible pulse of life itself. Then came the season for dusky flathead, and flounder, which would lie disguised on the rocky reefs, awaiting their chance to eat, and reproduce. The background to all this activity was the reefs that lined the shore, their rocks encrusted with pink and purple coralline algae. Cricket ball-sized heads of temperate water coral, yellow and orange pot-shaped sponges, and feather-headed worms studded pink and purple, bringing astonishing colour and variety. Under rocks lurked multi-coloured starfish, colourful crabs, shrimps, worms and blennies. To me, the waters

of Port Phillip were as glorious as any tropical sea. Perhaps more so, because the tropics are boringly uniform across the Pacific, while many of the glories I saw in Port Phillip were ancient Gondwanan survivors, unique to southern Australia. I left Melbourne in January 1980, aged 24, to study in Sydney. I can’t remember my last dive, but I’m sure that I had no idea it would be 33 years until my next. In 2013, family drew me home. The first thing I did was to revisit my favourite underwater haunt – the rocky reef at Beaumaris. For me, it is a special place, a touchstone of memory and experience so vivid that I frequently dream of it. The rocky reef is a fossil bed containing the bones and teeth of creatures that lived in an ancient Port Phillip more than six million years ago. The teeth of sharks larger than those of any great white, and the jawbones of mighty sperm whales, lay on the bottom there, awaiting pick-up by a curious boy. I had discovered the place when I was nine years old and had dived it hundreds of times searching for fossils. When I plunged into the water in 2013 I knew immediately that the place of my childhood was gone. Instead of a beautiful rocky reef covered in coral, I floated above a cesspit of green scum. Algae grew on every surface, and it had trapped a layer of mud that had suffocated almost all of the life that once thrived there. Thankfully the damage is reversible. Without pollution the green algae will starve, the mud disperse and the coral re-establish itself. In the weeks that followed, I snorkelled at my old haunts from Mornington to Black Rock. Everywhere I saw sickly green algae crowding out temperate corals and other life. The phenomenon is well known to biologists who study

partially or completely enclosed waterways. It’s called eutrophication, and it’s caused by an excess run-off of nitrogen and phosphorus. Port Phillip is huge – it covers almost 2000 square kilometres – so it takes time for eutrophication to be felt. But it also takes a very long time to flush out pollutants, because only one per cent of Port Phillip’s water is exchanged with the ocean each year. If nothing is done, the nutrients will build up until a vast algal bloom is triggered. A toxic Port Phillip – its waters green with algae and covered in dead fish, its shores piled with stinking vegetation and animal life – will be the result. The truth is that Melbourne is slowly strangling Port Phillip. Year by year the suburbs creep further south alongside its waters, and the infrastructure builds up, with more hard surfaces and less greenery to let stormwater soak into the soil. So each storm carries ever-more dog poo, rotten food, spilt petrol and oil, excess lawn fertiliser and other toxic substances straight into Port Phillip through the 300-odd barrel drains (more than one for each kilometre of shoreline) that act like open sores on virtually every Melbourne beach. Some of the nation’s most expensive real estate fronts Cowderoy St, St Kilda West. But the Cowderoy St drain looks like it emanates from the slums of Mumbai, rather than an affluent Australian city. I volunteered to clean the shore around it by picking up plastic bags and other hard rubbish, but I nearly choked on the stench as I waded through the sickly, grey, sewage-like sludge that filled the drain, pushing aside the dead birds and toxic scum as I went, and soon gave up. I’ve asked environmentalists why Melburnians tolerate the filth. Some say Port Phillip is so industrialised it’s beyond hope; others say it’s only used on a few summer days each

year, so nobody cares. I’m shocked to hear it, having returned from Sydney, where residents would lay down their lives for the harbour. Thirty years ago Sydney Harbour was as polluted as Port Phillip is now, but hard work and pride have restored it. So what does Port Phillip need? Some work has already been done. The Yarra River is cleaner than it was 30 years ago, the banks of the Merri Creek have been magnificently restored, and the Elwood Canal no longer stinks enough to make you gag. But those odious barrel drains continue to discharge their slow poison. They need reed beds to catch and soak up the toxins. In most places there’s more than enough flat land to do this. The Andrews state government, elected last year, has pledged to get rid of the 50 worst level crossings in the state. What about cleaning up Port Phillip’s 50 worst barrel drains? But the problems go beyond the drains. Flathead are the staple of Port Phillip fishers. When I was a kid, anyone could catch 30 or 40 “flatties”, all more than 30 centimetres long, in a day. The species has declined by 80 per cent since the 1970s. In those days, it took a male flathead seven years to grow to the legal take size of 27 centimetres. Today it takes up to 13 years. Many have pointed to dredging as a cause, but the decline predates dredging. Another suspect is the drought of the late 1990s and early 2000s. More important might be the reduction of the ghost mud shrimp, the sand flathead’s food source. In the ’70s it was present on muddy bottoms in astronomical numbers. Today it’s totally absent from many areas. Surely overfishing isn’t helping. Port Phillip desperately needs more marine reserve areas. Those that exist are pitifully small, their margins thronged with fishers eager to take anything that wanders

outside their bounds. Port Phillip’s margins have also been battered by inappropriate development. Even the Beaumaris fossil bed has been partially destroyed to make a car park for motorboat users. In Sydney, great swathes of harbour-side natural vegetation have been reserved, inappropriate infrastructure removed, and commercial fishing banned. As a result, fish stocks have recovered spectacularly. Enormous kingfish, bream and other species are now a common sight in Sydney Harbour. Even southern right whales have returned. When I moved to Sydney such things were unimaginable. Sydney Harbour and Port Phillip were pretty much equally blighted. But the people of Sydney have cared enough to make a difference. Surely Melburnians can, over time, do an equally good job with their waterway? The Sydney Harbour Foreshore Authority has done much good. A powerful Port Phillip authority, properly funded and accountable, could deliver the strategic vision required, and the means of delivering it. It also needs a much beefed-up research effort – perhaps a Port Phillip Institute of Marine Sciences. Research might show that seaweed farms could soak up the excess nutrient now poisoning the waterway. We might even be able to reintroduce now-vanished species. An old resident at Black Rock once told me that he used to dive for crayfish there as a child, on the rocky reefs. Imagine that: crayfish in Port Phillip.  Dr Tim Flannery is a scientist and writer. His books include Now or Never, The Weather Makers and The Future Eaters. This article was published in The Monthly, May 2015, and is reproduced with permission of the author.

with certain hearing needs to beTOP-UP experienced to be aids incorporating the islatest appreciated, which why we’re generation offering atechnology FREE TRIAL to the FREE OFpeople CHARGE until theto ¿rst 50 who respond END JULY. thisOF offer. Hear and enjoy the The choice isfor yours, eitherYou a will difference yourself. discrete deep canal aid or a be impressed. miniature receiver in canal aid. In As an EXCLUSIVE short term both cases theOFFER, aids will Hidden be small SPECIAL andHearing discrete, programmed is and providing eligibleto \RXU VSHFL¿F KHDULQJ OHYHOV DQG pensioners and veterans unique personal needs.