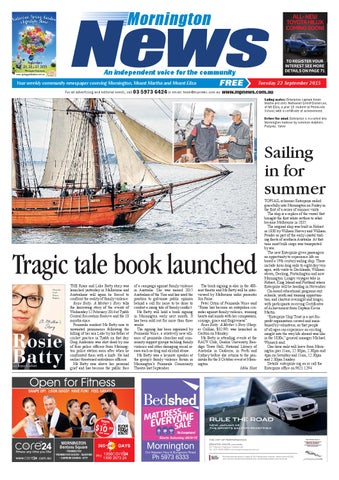 TO REGISTER YOUR INTEREST SEE MORE DETAILS ON PAGE 71

Sailing in for summer

Tragic tale book launched THE Rosie and Luke Batty story was launched yesterday in Melbourne and Australians will again be forced to confront the reality of family violence. Rosie Batty: A Mother’s Story tells the harrowing story of the events of Wednesday 12 February 2014 at Tyabb Central Recreation Reserve and the 18 months since. Peninsula resident Ms Batty rose to unwanted prominence following the killing of her son Luke by his father at cricket practice in Tyabb on that day. Greg Anderson was shot dead by one of four police officers from Mornington police station soon after when he confronted them with a knife. He had earlier threatened ambulance officers. Ms Batty rose above her personal grief and has become the public face

of a campaign against family violence in Australia. She was named 2015 Australian of the Year and has used the position to galvanise public opinion behind a call for more to be done to combat a rising tide of family conflict. Ms Batty will hold a book signing in Mornington early next month. It has been sold out for more than three weeks. The signing has been organised by Peninsula Voice, a relatively new alliance of peninsula churches and community support groups tackling family violence and other damaging social issues such as drug and alcohol abuse. Ms Batty was a keynote speaker at the group’s family violence forum in Mornington’s Peninsula Community Theatre last September.

The book signing is also in the 400seat theatre and Ms Batty will be interviewed by Melbourne radio presenter Jon Faine. Peter Orton of Peninsula Voice said “Rosie has become an outspoken crusader against family violence, winning hearts and minds with her compassion, courage, grace and forgiveness”. Rosie Batty: A Mother’s Story (Harper Collins, $32.99) was launched in Carlton on Monday. Ms Batty is attending events at the RACV Club, Deakin University, Bendigo Town Hall, National Library of Australia in Canberra, in Perth and Sydney before she returns to the peninsula for the 8 October event at Mornington. Mike Hast

TOPSAIL schooner Enterprize sailed gracefully into Mornington on Friday in the first of a series of summer visits. The ship is a replica of the vessel that brought the first white settlers to what became Melbourne in 1835. The original ship was built in Hobart in 1830 by William Harvey and William Pender as part of the early coastal trading fleets of southern Australia. At that time most bulk cargo was transported by sea. The new Enterprize gives passengers an opportunity to experience life on board a 19th century sailing ship. These include hour-long sails to eight-day voyages, with visits to Docklands, Williamstown, Geelong, Portarlington and now Mornington. Longer voyages take in Hobart, King Island and Portland where Enterprize will be heading in November. On-board educational programs suit schools, youth sail training opportunities, and charters overnight and longer, with participants receiving Certificates of Achievement from Captain Kevin Martin. “Enterprize Ship Trust is a not-forprofit organisation crewed and maintained by volunteers, so that people of all ages can experience an exciting insight into the way life aboard was like in the 1830s,” general manager Michael Womack said. One-hour sails will leave from Mornington pier 11am, 12.30pm, 2.30pm and 4pm on Saturday and 11am, 12.30pm and 2.30pm Sunday. Details: enterprize.org.au or call the Enterprize office on 9621 1294.

THE ART OF PERFORMANCE