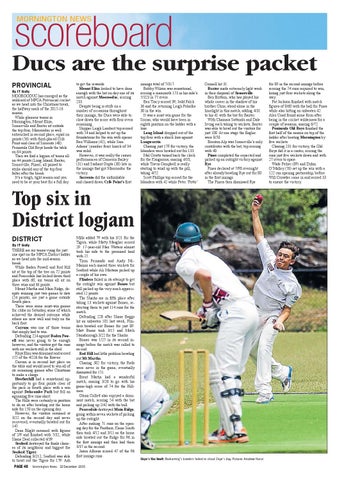 Ducs are the surprise packet PROVINCIAL By IT Gully MOOROODUC has emerged as the wildcard of MPCA Provincial cricket as we head into the Christmas break, the halfway mark of the 2015-16 season. While glamour teams in Mornington, Mount Eliza, Somerville and Baxter sit outside the top four, Moorooduc is well entrenched in second place, equal on points (56) with third-placed Crib Point and clear of Sorrento (48). Peninsula Old Boys heads the table on 64 points. Then we find a logjam of teams all on 44 points (Long Island, Baxter, Somerville, Pines), all poised to strike should any of the top four falter after the break. It’s a tough, tight season and you need to be at your best for a full day

to get the rewards. Mount Eliza looked to have done enough with the bat on day one of its match against Moorooduc, scoring 233. Despite being is strife on a number of occasions throughout their innings, the Ducs were able to claw down the score with four overs remaining. Skipper Leigh Lambert top scored with 54 and helped to set up the foundations for the win with opener Ben Williams (42), while Sam Adams’ (number four) knock of 34 was solid. However, it was really the cameo performances of Cameron Bailey (31) and Sushant Gupta (38) late in the innings that got Moorooduc the victory. Sorrento did the unthinkable and chased down Crib Point’s first

innings total of 7/317. Bobby Wilson was sensational, scoring a mammoth 153 in his side’s 5/323 in 77 overs. Ben Tracy scored 39, Jedd Falck 36 and the returning Leigh Poholke 30 in the win. It was a must win game for the Sorras, who would have been in eighth position on the ladder with a loss. Long Island dropped out of the top four with a shock loss against Langwarrin. Chasing just 179 for victory, the Islanders were bowled out for 133. Mal Coutts turned back the clock for the Kangaroos, snaring 4/10, while Travis Campbell is really starting to wind up with the pill, taking 4/52. Scott Phillips top scored for the Islanders with 42 while Peter ‘Potto’

Connell hit 31. Baxter made extremely light work in their disposal of Somerville. Ben Brittain, who has played his whole career in the shadow of his brother Chris, stood alone in the limelight in this match, adding 4/31 to his 41 with the bat for Baxter. With Chamara Sattambi and Dale Irving each taking to wickets, Baxter was able to bowl out the visitors for just 108. At one stage the Eagles were 8/50. Brenton Alp was Somerville’s only contributor with the bat, top scoring with 40. Pines completed the expected and picked up an outright victory against Rye. Pines declared at 7/98 overnight after already bowling Rye out for 80 in the first innings. The Piners then dismissed Rye

Top six in District logjam DISTRICT By IT Gully THERE are six teams vying for just one spot on the MPCA District ladder as we head into the mid-season break. While Baden Powell and Red Hill sit at the top of the tree on 72 points and Pearcedale has locked down third place with 60, six teams all sit on three wins and 36 points. Mount Martha and Main Ridge, despite winning just two games to date (24 points), are just a game outside fourth place. There were some must-win games for clubs on Saturday, some of which achieved the desired outcome while others are now well and truly on the back foot. Carrum was one of those teams that simply had to win. Defending 224 against Baden Powell was never going to be enough however, and the visitors got the runs with six wickets still in the shed. Rhys Elmi was dominant and scored 155 of the 4/226 for the Braves. Carrum is in second last place on the table and would need to win all of its remaining games after Christmas to make a charge. Heatherhill had a sensational opportunity to go four points clear of the pack in fourth place with a win against Delacombe Park but fell an agonising five runs short. The Hills were certainly in position to do so after bowling out the home side for 150 on the opening day. However, the visitors resumed at 3/22 on the second day and never recovered, eventually bowled out for 145. Dean Blight resumed with figures of 2/9 and finished with 5/32, while Shane Deal collected 4/39. Seaford destroyed the finals chances of its neighbour and biggest foe Seaford Tigers. Defending 8/212, Seaford was able to bowl out the Tigers for 179. Ash

Mills added 79 with his 3/21 for the Tigers, while Matty Meagher scored 29. 17-year-old Max Watters almost took his side to the promised land with 25. Tiron Fernando and Andy McMannis each snared three wickets for Seaford while Ali Mortaza picked up a couple of his own. Flinders failed in its attempt to get the outright win against Boneo but still picked up the very much appreciated 12 points. The Sharks are in fifth place after taking 13 wickets against Boneo, restricting them to just 114 runs for the match. Defending 228 after Shane Beggs hit an unbeaten 101 last week, Flinders bowled out Boneo for just 89. Matt Burns took 3/15 and Mitch Stansborough 3/22 for the Sharks. Boneo was 1/25 in its second innings before the match was called to an end. Red Hill had little problem bowling out Mt Martha. Chasing 302 for victory, the Reds were never in the game, eventually dismissed for 151. Brent Martin had a wonderful match, snaring 3/26 to go with his game-high score of 74 for the Hillmen. Glenn Collett also enjoyed a dominant match, scoring 54 with the bat and picking up 2/42 with the ball. Pearcedale destroyed Main Ridge, going within seven wickets of picking up the outright. After making 71 runs on the opening day for the Panthers, Kaine Smith then took 4/12 and 3/11 as the home side bowled out the Ridge for 96 in the first innings and then had them 3/37 in the second. Jason Albress scored 47 of the 96 first innings runs.

for 89 in the second innings before scoring the 74 runs required to win, losing just four wickets along the way. Pat Jackson finished with match figures of 8/60 with the ball for Pines while also hitting an unbeaten 42. Alex Coad found some form after being in the cricket wilderness for a couple of seasons, snaring 6/72. Peninsula Old Boys finished the first half of the season on top of the ladder after beating Mornington by five wickets. Chasing 231 for victory, the Old Boys did it in a canter, scoring the runs just five wickets down and with 27 overs to spare. Wade Pelzer (89) and Dylan O’Malley (76) set up the win with a 122 run opening partnership, before Will Crowder came in and scored 33 to ensure the victory.