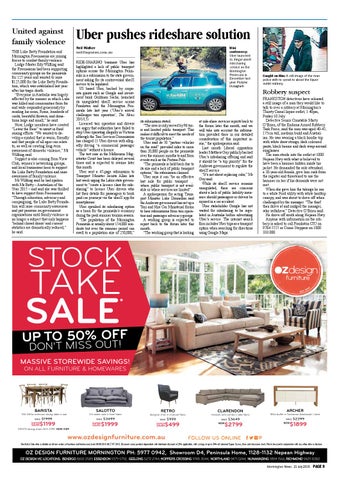 United against family violence THE Luke Batty Foundation and Mornington Freemasons are joining forces to combat family violence. Lodge Master Edy Wilfling said the Freemasons had been supporting community groups on the peninsula for 125 years and wanted to raise $125,000 for the Luke Batty Foundation, which was established last year after his tragic death. “Everyone in Australia was hugely affected by the manner in which Luke was killed and communities from far and wide responded generously by sending his mum, Rosie, hundreds of cards, beautiful flowers, and donations large and small,” he said. Now, Lodge members have created “Lewis the Bear” to assist in fund raising efforts. “We wanted to develop a symbol that is warm, friendly and that people of all ages can relate to, as well as creating long-term awareness of domestic violence,” Mr Wilfling said. Support is also coming from View Club, women’s networking groups, and local businesses keen to support the Luke Batty Foundation and raise awareness of family violence. Mr Wilfling said he had spoken with Ms Batty – Australian of the Year 2015 – and said she was thrilled to have support from Freemasons. “Through education, advocacy and campaigning, the Luke Batty Foundation will raise community awareness and put pressure on government organisations until family violence is no longer a subject that only happens ‘behind closed doors’ and current statistics are dramatically reduced,” he said.

Neil Walker neil@mpnews.com.au RIDE-SHARING business Uber has highlighted a lack of public transport options across the Mornington Peninsula in a submission to the state government asking for its controversial uberX service to be legalised. US based Uber, backed by corporate giants such as Google and investment bank Goldman Sachs, launched its unregulated uberX service across Frankston and the Mornington Peninsula late last year (‘Uber’s arrival challenges taxi operators’, The News 20/1/15). Licenced taxi operators and drivers are angry that authorities have failed to stop Uber operating illegally in Victoria although the Taxi Services Commission has charged 11 Uber drivers with allegedly driving “a commercial passenger vehicle” without a licence. The test case in the Melbourne Magistrates Court has been delayed several times and is expected to resume later this month. Uber sent a 47-page submission to Transport Minister Jacinta Allan late last week urging the Labor state government to “create a licence class for ridesharing” to licence Uber drivers who list their details for passengers to book paid car journeys via the uberX app for smartphones. Uber spruiked its ridesharing option as a boon for the peninsula’s economy during the peak summer tourism season. “The population of the Mornington Peninsula is usually about 154,000 residents but over the summer period can swell to a population size of 250,000,”

its submission stated. “The area is only served by 96 taxis and limited public transport. This makes it difficult to meet the needs of the tourist population.” Uber said its 50 “partner vehicles on the road” provided rides to more than 20,000 people on the peninsula over the summer months to and from events such as the Portsea Polo. “The peninsula is held back due to its size and a lack of public transport options,” the submission claimed. Uber says it can “be an effective last mile for public transport … where public transport is not available or where services are limited”. A spokesperson for acting Transport Minister Luke Donnellan said the Andrews government has set up a Taxi and Hire Car Ministerial forum to hear submissions from taxi operators and passenger advocacy groups. A working group is expected to report back to the forum later this month. “The working group that is looking

at ride-share services reports back to the forum later this month, and we will take into account the information provided there in our detailed consideration of this important issue,” the spokesperson said. Last month Liberal opposition leader Matthew Guy publicly backed Uber’s ridesharing offering and said it should be “a top priority” for the Andrews government to regulate the uberX service. “It’s not about replacing cabs,” Mr Guy said. While its uberX service remains unregulated, there are concerns about a lack of public liability insurance should passengers or drivers be injured in a car accident. Uber stakeholder Google has not waited for ridesharing to be regulated in Australia before advertising Uber’s service. The internet search firm includes Uber trips as a transport option when searching for directions using Google Maps.

Caught on film: A still image of the man police with to speak to about the liquor outlet robbery.

Robbery suspect FRANKSTON detectives have released a still image of a man they would like to talk to over a robbery at Mornington’s Thirsty Camel liquor outlet, 1.40pm, Friday 10 July. Detective Senior Constable Marty O’Brien, of the Embona Armed Robbery Task Force, said the man was aged 40-45, 175cm tall, medium build and Australian. He was wearing a black hoodie top with white draw strings, dark coloured pants, black beanie and dark wrap-around sunglasses. The man strode into the outlet at 1000 Nepean Hwy with what is believed to have been a hammer hidden inside his jacket. He demanded the sole attendant, a 20-year-old female, give him cash from the register and threatened to use the hammer on her if his demands were not met. When she gave him the takings he ran to a white Ford utility with white hardtop canopy, and was about to drive off when challenged by the manager. “The thief then drove at and nudged the manager, who withdrew,” Detective O’Brien said. He drove off south along Nepean Hwy. Anyone with information on the robbery is asked to call Frankston CIU on 9784 5555 or Crime Stoppers on 1800 333 000.

www.ozdesignfurniture.com.au Stocktake Sale offer available on all new orders of furniture and homewares from 30/06/2015 till 27/07/2015. Discount varies product dependent with minimum discount of 20% applicable, with savings of up to 50% off selected Super Savers, floor and clearance stock. Not to be used in conjunction with any other offer or finance.