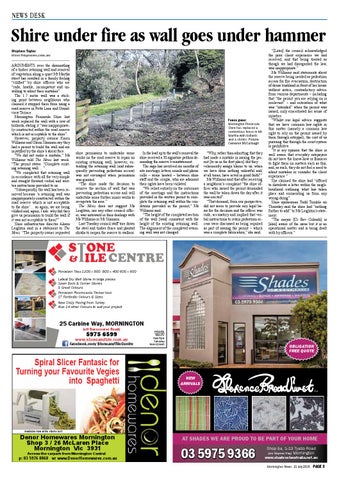 Shire under fire as wall goes under hammer Stephen Taylor steve@mpnews.com.au ARGUMENTS over the dismantling of a timber retaining wall and removal of vegetation along a quiet Mt Martha street has resulted in a family feeling “vilified” by shire officers who are “rude, hostile, incompetent and unwilling to admit their mistakes”. The 1.7 metre wall was a sticking point between neighbours who claimed it stopped them from using a road reserve in Potts Lane and Grandview Terrace. Mornington Peninsula Shire last week replaced the wall with a row of bollards, stating it “was inappropriately constructed within the road reserve which is not acceptable to the shire”. However, property owners Karen Williams and Glenn Shannon say they had a permit to build the wall and are mystified by the shire’s about face. “We did not make a mistake,” Ms Williams told The News last week. “The permit states: “Complete existing retaining wall …”. “We completed that retaining wall in accordance with all the very simple and straight forward verbal and written instructions provided to us. “Subsequently, the wall has been removed because ‘a retaining wall was inappropriately constructed within the road reserve which is not acceptable to the shire’… so again, we are being vilified and, again, I ask: why did they give us permission to build the wall if it was not acceptable to them?” Shire infrastructure director Alison Leighton said in a statement to The News: “The property owner requested

shire permission to undertake some works on the road reserve to repair an existing retaining wall, however, extending the retaining wall (and subsequently preventing pedestrian access) was not envisaged when permission was granted. “The shire made the decision to remove the section of wall that was preventing pedestrian access and will undertake some further minor works to revegetate the area.” The News does not suggest Ms Leighton, nor any other council officer, was untoward in their dealings with Ms Williams or Mr Shannon. Last Tuesday council staff tore down the steel and timber fence and planted shrubs to reopen the reserve to walkers.

In the lead up to the wall’s removal the shire received a 50-signature petition demanding the reserve’s reinstatement. The saga has involved six months of site meetings, letters, emails and phone calls – some heated – between shire staff and the couple, who are adamant their rights have been violated. “We relied entirely on the outcomes of the meetings and the instructions provided in the written permit to complete the retaining wall within the conditions provided in the permit,” Ms Williams said. “The height of the completed section of the wall [was] consistent with the height of the existing retaining wall. The alignment of the completed retaining wall was not changed.

“Why, rather than admitting that they had made a mistake in issuing the permit [to us in the first place] did they … vehemently assign blame to us, when we have done nothing unlawful and, at all times, have acted in good faith?” Ms Williams said that after receiving a neighbour’s complaint “the shire officer who issued the permit demanded the wall be taken down the day after it was erected”. “That demand, from our perspective, did not seem to provide any legal basis for the decision and the officer was rude, accusatory and implied that verbal instructions to retain pedestrian access were discussed as being required as part of issuing the permit – which was a complete fabrication,” she said.

“[Later] the council acknowledged the poor client experience we had received, and that being treated as though we had disregarded the law, was inappropriate.” Ms Williams said statements about the reserve being needed as pedestrian access for fire evacuation, destruction of dense bushland in front of her house without notice, contradictory advice from various departments – including that “the permit you are relying on is irrelevant” – and reiteration of what was “intended” when the permit was issued, only exacerbated her sense of injustice. “Whilst our legal advice suggests that we have common law rights in this matter (namely a common law right to rely on the permit issued by them through estoppel), the cost of us pursuing this through the court system is prohibitive. “It is my opinion that the shire is well aware that everyday ratepayers do not have the know-how or finances to fight them on matters such as this, and, as such, they do not feel a need to admit mistakes or consider the client experience.” She claimed the shire had “offered to distribute a letter within the neighbourhood outlining what has taken place and exonerating us from any wrong-doing”. Shire spokesman Todd Trimble on Thursday said the shire had “nothing further to add” to Ms Leighton’s statement. “The mayor [Cr Bev Colomb] is [also] aware of the issue but it is an operational matter and is being dealt with by officers.”

Spiral Slicer Fantasic for Turning your Favourite Vegies into Spaghetti