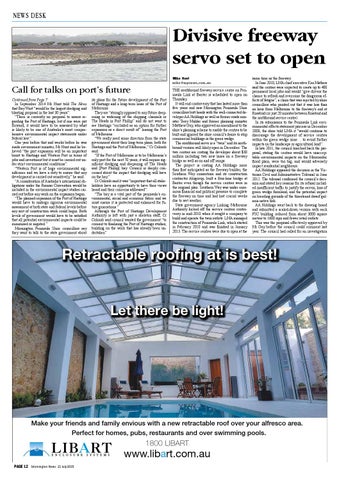 Call for talks on port’s future Continued from Page 7 In September 2014 Mr Hunt told The News that Bay West “would be the largest dredging and blasting proposal in the last 30 years”. “There is currently no proposal to assess regarding the Port of Hastings, but if one were put forward, it would have to be assessed by what is likely to be one of Australia’s most comprehensive environmental impact statements under federal law.” One year before that and weeks before he was made environment minister, Mr Hunt said he believed “the port expansion will be an important boost to Hastings and Western Port in terms of jobs and investment but it must be carried out under strict environmental conditions”. “Western Port is of huge environmental significance and we have a duty to ensure that any development is carried out sensitively,” he said. “A consideration of Australia’s international obligations under the Ramsar Convention would be included in the environmental impact studies carried out before any work on the expansion began. “The planned expansion of the Port of Hastings would have to undergo rigorous environmental assessment at both state and federal levels before any sort of construction work could begin. Both levels of government would have to be satisfied that all potential environmental impacts could be minimised or negated.” Mornington Peninsula Shire councillors say they want to talk to the state government about

its plans for the future development of the Port of Hastings and a long-term lease of the Port of Melbourne. They are “strongly opposed to any future deepening or widening of the shipping channels or The Heads in Port Phillip” and do not want to see Hastings “excluded as an option for further expansion as a direct result of” leasing the Port of Melbourne. “We really need some direction from the state government about their long-term plans, both for Hastings and the Port of Melbourne,” Cr Colomb said. “If the Port of Melbourne is to be Melbourne’s only port for the next 70 years, it will require significant dredging and deepening of The Heads and [Port Phillip] bay. Council is deeply concerned about the impact that dredging will have on the bay.” Cr Colomb said it was “important that all stakeholders have an opportunity to have their views heard and their concerns addressed”. “The bay is a vital part of the peninsula’s environmental, social and economic fabric and we must ensure it is protected and enhanced for future generations.” Although the Port of Hastings Development Authority is left with just a skeleton staff, Cr Colomb said council wanted the government “to commit to finalising the Port of Hastings studies, building on the work that has already been undertaken”

THE southbound freeway service centre on Peninsula Link at Baxter is scheduled to open on Thursday. It will end controversy that has lasted more than five years and saw Mornington Peninsula Shire councillors butt heads with the well-connected developer AA Holdings as well as former roads minister Terry Mulder and former planning minister Matthew Guy, who approved an amendment to the shire’s planning scheme to enable the centres to be built and ignored the shire council’s desire to stop commercial buildings in the green wedge. The southbound servo is a “twin” and its northbound version will likely open in December. The two centres are costing the developer about $30 million including two new lanes on a freeway bridge as well as on and off ramps. The project is costing AA Holdings more than first anticipated as the freeway builder, the Southern Way consortium and its construction contractor Abigroup, built a four-lane bridge at Baxter even though the service centres were in the original plan. Southern Way was under enormous financial and political pressure to complete the freeway on time and had lost crucial weeks due to wet weather. State government agency Linking Melbourne Authority kicked off the service centres controversy in mid-2010 when it sought a company to build and operate the twin outlets. LMA managed the construction of Peninsula Link, which started in February 2010 and was finished in January 2013. The service centres were due to open at the

same time as the freeway. In June 2010, LMA chief executive Ken Mathers said the centres were expected to create up to 400 permanent local jobs and would “give drivers the chance to refresh and overcome the dangerous effects of fatigue”, a claim that was rejected by shire councillors who pointed out that it was less than an hour from Melbourne to the freeway’s end at Rosebud (or just 20 minutes between Rosebud and the northbound service centre). In its submission to the Peninsula Link environmental effects statement process in December 2008, the shire told LMA it “would continue to discourage the development of service centres within the green wedge zone ... to avoid further impacts on the landscape or agricultural land”. In late 2011, the council knocked back the proposal, stating the centres would have unacceptable environmental impacts on the Moorooduc flood plain, were too big, and would adversely impact residential neighbours. AA Holdings appealed the decision in the Victorian Civil and Administrative Tribunal in June 2012. The tribunal confirmed the council’s decision and stated key reasons for its refusal included insufficient traffic to justify the servos, loss of green wedge farmland, and the potential impact on breeding grounds of the threatened dwarf galaxia native fish. AA Holdings went back to the drawing board and submitted a scaled-down version with each FSC building reduced from about 3000 square metres to 1600 sqm and fewer retail outlets. This was the proposal effectively approved by Mr Guy before the council could comment last year. The council had called for an investigation

Retractable roofing at is best!

Let there be light!

Make your friends and family envious with a new retractable roof over your alfresco area. Perfect for homes, pubs, restaurants and over swimming pools.