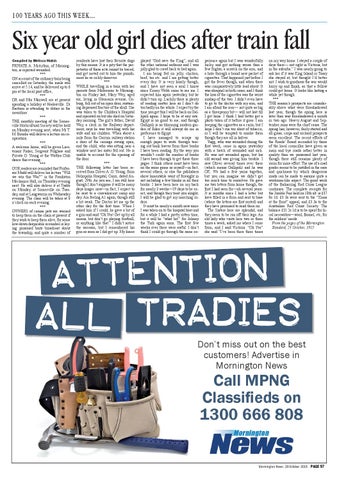 Six year old girl dies after train fall Compiled by Melissa Walsh PRIVATE A. McArthur, of Mornington, is reported wounded. *** ON account of the ordinary train being cancelled on Saturday, the mails will arrive at 5.14, and be delivered up to 6 pm at the local post office, *** DR and Mrs Maxwell are at present spending a holiday at Healesville. Dr Bartram is attending to duties in the meantime. *** THE monthly meeting of the Somerville Horticultural Society will be held on Monday evening next, when Mr T. M. Bourke will deliver a lecture on cooperation. *** A welcome home, will be given Lieutenant Fisher, Sergeant Polglase and Private O. Young at the Wattles Club dance this evening. *** OUR readers are reminded that Professor Mudd will deliver his lecture “Will we win this War?” in the Frankston Mechanics Hall, on Thursday evening next. He will also deliver it at Tyabb on Monday, at Somerville on Tuesday, and at Langwarrin on Wednesday evening. The chair will be taken at 8 o’clock on each evening. *** OWNERS of canine pets are warned to keep them on the chain at present if they wish to keep them alive, for some low-down despicable scoundrel is laying poisoned baits broadcast about the township, and quite a number of

residents have lost their favorite dogs by this means. It is a pity that the perpetrator of these acts cannot be traced, and get meted out to him the punishment he so richly deserves. *** WHILE travelling in a train with her parents from Melbourne to Mornington on Friday last, Mary Way, aged six, living in Glencairn avenue, Coburg, fell out of an open door, sustaining depressed fracture of the skull. She was taken to the Children’s Hospital and operated on but she died on Saturday morning. The girl’s father, David Way, a clerk in the Railway department, says he was travelling with his wife and six children. When about a mile from the Carrum railway station a door of the carriage swung open, and the child, who was sitting near a window next her sister fell out. He is unable to account for the opening of the door. *** THE following letter has been received from Driver A. G. Young, from Heliopolis Hospital, Cairo, dated August, 29th. As you see, I am still here though I don’t suppose it will be many days longer now—in fact, I expect to be sent to a convalescent camp any day. Am feeling A1 again, though still a bit weak. The Doctor let me up the other day for the first time. When I asked him if I could, he gave a bit of a grin and said “Oh Yes! Get up by all means, but don’t go playing football, or anything like that.” I didn’t notice the sarcasm, but I remembered his grin as soon as I did get up. My knees

played “God save the King”, and all the other national anthems and I was jolly glad to crawl back to bed again. I am being fed on jelly, chicken, beef, tea etc. and I am getting better every day. It is very lonely though, and I have not seen a soul I know since Kenny Webb came to see me. I expected him again yesterday, but he didn’t turn up. Luckily there is plenty of reading matter here so I don’t do too badly on the whole. I expect by the time you get this I will be back on Gallipoli again. I hope to be at any rate. Egypt is no good to me; and though Gallipoli is no blooming modern garden of Eden it will always do me in preference to Egypt. I have managed to scrape up enough paper to write through tearing out bank leaves from three books I have been reading. By the way you wouldn’t credit the number of books I have been through to get these three pages. I think others must have been on the same game as myself—in fact, several others, or else the publishers show lamentable want of foresight in not including a few blanks in all their books. I have been here on my back for nearly 3 weeks—19 days to be exact, and though they treat you alright, I will be glad to get my marching orders. It must be nearly a month now since I was taken on to the hospital boat and for a while I had a pretty rotten time, but it will be “what ho!” for Johnny the Turk again soon. The first few weeks over there were awful. I don’t think I could go through the same ex-

perience again but I was wonderfully lucky, and got nothing worse than a few frights, a scratch on the arm, and a hole through a brand new packet of cigarettes. That happened just before I got the fever though, and when there was comparatively little lead about. It was shrapnel in both cases, and I think the loss of the cigarettes was the worst mishap of the two. I didn’t even have to go to the doctor with my arm, and I am afraid the scar— not quite as big as a threepenny bit— will not last till I get hone. I think I had better get a photo taken of it before it goes. I am keeping the cigarettes as a curio, but I hope I don’t run too short of tobacco, or I will be tempted to smoke them though they are all in halves. Vagg, who was wounded during the first week, came in again yesterday with a batch of wounded and sick. He was not wounded again, but his old wound was giving him trouble. I saw Oliver several times over there (which means Gallipoli) and he was OK. We had a few yarns together, but you can imagine we didn’t get too much time to ourselves. He gave me two letters from home though, the first I had seen for—oh several years. It is months since I had a letter but have filled in a form and sent to base (where the letters are first sorted) and they have promised to send them on. The Sisters here are splendid, and they seem to be run off their legs. An old lady who visits here two or three times a week, asked me where I came from, and I said Victoria. “Oh Yes” she said “I’ve been there three times

on my way home. I stayed a couple of days there— not right in Victoria, but in the suburbs.” I was nearly going to ask her if it was King Island or Tassy she stayed at, but thought I’d better not. I wish to goodness the war would hurry up and finish, so that a fellow could get home. It looks like lasting a while yet though. *** THE season’s prospects are considerably above what were foreshadowed last year, though the spring here is later than was foreshadowed a month or two ago. Heavy August and September rains were the chief cause. The spring has, however, fairly started and all grass, crops and orchard prospects seem excellent. The recent efforts of the Roads’ Board seconded by those of the local councillor have given us main and bye roads rather better in quality than we possessed last year, though there still remains plenty of room for more effort. The use of a road grader seems to be justified in the ease and quickness by which dangerous roads can be made to assume quite a workman-like aspect. The good work of the Balnarring Red Cross League continues. The complete receipts for the Jumble Fair held on 18th ult. is £37 8s 1d. £3 3s were sent to the “Xmas at the front” appeal, and £3 3s to the Australian Red Cross Society. The balance £31 2s 1d is to be spent for local necessities—wool, flannel, etc, for the soldiers’ needs. From the pages of the Mornington Standard, 23 October, 1915