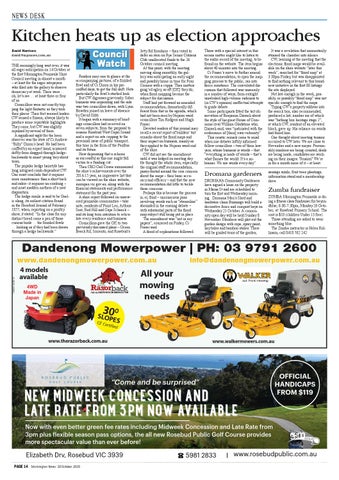 Kitchen heats up as election approaches David Harrison david@mpnews.com.au THE seemingly long wait over, it was all eager anticipation on 14 October at the first Mornington Peninsula Shire Council meeting in almost a month – at least for the eager ratepayers who filed into the gallery to observe democracy at work. There were … oh, let’s see … at least three or four of us. Councillors were not exactly tripping the light fantastic as they took their places. Their feet seemed leaden. CW sensed a frisson, always likely to produce some reportable highlights. They came, but CW was slightly repulsed by several of them. A significant sight for the keen observer was the state of Cr Andrew “Billy” Dixon’s head. He had been coiffed by an expert hand, scissored deftly from dragged-through-hedgebackwards to smart young tory about town. The popular hedge hairstyle has long intrigued comb-dependent CW. One must conclude that it requires more maintenance than a short back and sides– it requires un-combing – and must madden mothers of a neat disposition. The hedge simile is said to be Gaelic slang, its earliest citation found in the Hereford Journal of February 1857, when, reporting on a poultry show, it stated: “In the class for any distinct breed came a pen of those curious birds … the frizzled fowls … looking as if they had been drawn through a hedge backwards.”

Readers may care to glance at the accompanying pictures, of a frizzled fowl and of Cr Dixon in his precoiffed days, to get the full drift. Note particularly the fowl’s startled look. But CW digresses grievously. Sober business was impending and the side was two councillors down, with Lynn Bowden joined on leave of absence by David Gibb. It began with a summary of briefings councillors had received on seven subjects, from the proposal to rename Rosebud West Capel Sound and a report on rate capping to the perennial issue of public transport, this time in the form of the PenBus and its future. How depressing that a scheme as successful as this one might fall victim to a funding cut. Then CEO Carl Cowie summarised the shire’s achievements over the 2014-15 year, an impressive list that can be viewed on the shire website, mornpen.vic.gov.au, along with the financial statements and performance statement for the past year. A shire report followed on unsewered peninsula communities – take note, residents of Point Leo, Arthurs Seat, Red Hill and Cape Schanck – and its long term intention to reticulate every residence and business. Councillors gave the OK to two previously discussed plans – Ocean Beach Rd, Sorrento, and Rosebud’s

Jetty Rd foreshore – then voted to defer an item on Rye Senior Citizens Club unallocated funds to the 26 October council meeting. At this point, with the meeting moving along smoothly, the gallery was anticipating an early night and possibly home in time for Four Corners with a cuppa. Then matters gang’ed agley, as aft [OK] they do, when flood mapping became the subject for discussion. Staff had put forward an amended recommendation, dramatically different from that in the agenda, which had not been seen by Nepean ward councillors Tim Rodgers and Hugh Fraser. Devoted readers of this journal may recall a recent report of builders’ tart remarks about the flood maps and their impact on business, mainly as they applied to the Nepean ward end of the shire. CW did not see the amendment until it was lodged on meeting day. He thought the whole item, especially the original staff recommendation, pussy-footed around the core concern about the maps – their basic accuracy and efficacy – and that the new recommendation did little to tackle these concerns. Perhaps this is because the process is, er, fluid – unconscious puns involving words such as “streamline” abounded in the ensuing debate – with substantial parts of the flood map subject still being put in place. The amendment was “not in my papers”, couriered on Friday, Cr Fraser said. A flood of explanations followed.

Those with a special interest in this arcane matter might like to listen to the audio record of the meeting, to be found on the website. The item begins about 40 minutes into the meeting. Cr Fraser’s move to further amend the recommendation, to open the mapping process to the public, ran into fierce resistance. The convoluted discussion that followed was unseemly in a number of ways, from outright unrebuked high-volume rudeness to (in CW’s opinion) ineffectual attempts to guide debate. Some participants fitted the tart observation of Benjamin Disraeli about the style of his great House of Commons rival William Gladstone who, Disraeli said, was “inebriated with the exuberance of [their] own verbosity”. This caustic remark came to mind when one debater loftily informed fellow councillors – two of them lawyers, whose business is words – that “everything is made of words – that’s what frames the world. It’s a nobrainer. We use words every day”.

It was a revelation that momentarily stunned the chamber into silence. CW, learning at the meeting that the electronic flood maps would be available on the shire website “later this week”, searched for “flood map” at 3.30pm Friday, but was disappointed to find nothing relevant to this brandnew initiative in the first 80 listings the site displayed. Not late enough in the week, possibly, or possibly “flood map” was not specific enough to find the maps. Typing CW’s property address into the search box, also recommended, produced a list, number six of which was “bathing box heritage stage 2”, at which CW, resident of an elevated block, gave up. His reliance on words had failed him. One thought about meeting tension occurred to CW later. We are close to November and a new mayor. Presumably numbers are being counted, deals are being made, candidates are working on their images. Tension? We’re in for a month more of it – at least.

DROMANA Community Gardeners have signed a lease on the property in Marna St and are scheduled to turn the first sod Wednesday morning. Dromana Men’s Shed and hardware chain Bunnings will build a decorative fence and compost bays on Wednesday 21 October. A community open day will be held Sunday 8 November. Members will plot out the garden design with rope, spray paint, hay bales and bamboo stakes. There will be guided tours of the garden,

Zumba fundraiser ZUMBA Mornington Peninsula is doing a fitness class fundraiser for beyondblue, 6:30-7:30pm, Monday 26 October, at Rosebud Primary School. The cost is $10 (children Under 13 free). Those attending are asked to wear something blue. The Zumba instructor is Helen Rollinson, call 0418 762 242.

4WD Made in Japan

“Come and be surprised”

Now with even better green fee rates including Midweek Concession and Late Rate from 3pm plus flexible season pass options, the all new Rosebud Public Golf Course provides more spectacular value than ever before!