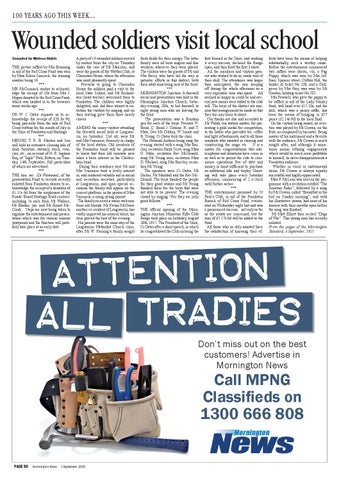 Wounded soldiers visit local school Compiled by Melissa Walsh THE picture raffled by Mrs Brunning in aid of the Red Cross Fund was won by Miss Eileen Simcock, the winning number being 16. *** MR McCormack wishes to acknowledge the receipt of 10s from Mrs J. Hogan donated to the Red Cross Fund, which was handed in to the treasurer some weeks ago. *** CR W. J. Oates requests us to acknowledge the receipt of £20 8s 9d, being proceeds from the sale of Red Cross buttons for the month of July in the Shire of Frankston and Hastings. *** MESSRS T. R. B. Morton and Son will hold an extensive clearing sale of land, furniture, statuary, stock, vehicles, etc., on account of N. R. Ingham Esq, of “Ingle” Park, Bittern, on Tuesday, 14th September, full particulars of which are advertised. *** THE hon. sec. (Dr Plowman), of the presentation Fund to recruits recently enlisted from Frankston desires to acknowledge the receipt of a donation of £1 11s 6d from the employees of the Roads’ Board Hastings Road contract, including 5s each from Mr Wallace, Mr Bladen, jun. and Mr Ernest McComb. Steps are now being taken to organise the entertainment and presentation which was for various reasons postponed and the function will probably take place at an early date. ***

A party of 14 wounded soldiers arrived by motors from the city on Thursday under the care of Mr Malcolm, and were the guests of the Wattles Club, at Clarendon House, where the afternoon was most pleasantly spent. Previous to going to Clarendon House the soldiers paid a visit to the local State School, and Mr Richardson (head teacher) welcomed them to Frankston. The children were highly delighted, and did their utmost to entertain the visitors by singing and on their leaving gave them three hearty cheers. *** AMONG the many visitors attending the farewell social held at Langwarrin, on Saturday; 21st ult, were Mr and Mrs Summers, formerly in charge of the local station. Old members of the Frankston band will be pleased to know that their old comrade now takes a keen interest in the Cheltenham band. During their residence here Mr and Mrs Summers took a lively interest in, and rendered valuable aid in social and recreation societies, particularly at Langwarrin, and upon special occasions the family still appear on the concert platform, in the person of Miss Summers, a rising young pianist. The family received a warm welcome from old friends. Mr Vivian McGraw, another ex-resident of Langwarrin, has vastly improved his musical talent, his item proved the best of the evening. His parents were the main stay of the Langwarrin Methodist Church choir, after Mr W. Fleming’s family sought

fresh fields for their energy. The latter family were all born singers and fine workers, wherever they were placed. The visitors were the guests of Mr and Mrs Berry, who have led the way in patriotic efforts in this district, both their adult sons being now at the front. *** MORNINGTON Junction. A farewell social and presentation was held in the Mornington Junction Church, Saturday evening 28th, to bid farewell to eight young men who are leaving for the front. The presentation was a fountain pen for each of the boys. Privates W. Bond, C. Bond J. Cozens, H. and T. Male, Geo Mc Cubbin, W. Smale and B. Young. Cr Oates took the chair. The National Anthem being sung the evening started with a song Mrs Barclay, recitation Hazle Scott, song Miss G. Male, recitation Rev McDonald, song Mr Young senr, recitation Miss D. Michael, song Mrs Barclay, recitation Mr Young. The speakers were Cr Oates, Mr Dicker, Mr Marshall and the Rev McDonald. The boys thanked the people for their good wishes and Mr Young thanked them for the boys that were not able to be present. The evening closed by singing “For they are jolly good fellows.” *** THE official opening of the Mornington Junction Miniature Rifle Club Range took place on Saturday, August 28th, 1915. The President of the Shire, Cr Oates after a short speech, in which he congratulated the Club on being the

first formed in the Shire, and wishing it every success, declared the Range open, and then fired the first 3 shots. All the members and visitors present who wished to do so, made trial of their skill. The attendance was larger than anticipated, the rain keeping off during the whole afternoon so a very enjoyable time was spent. All seemed as happy as could be and several new names were added to the club roll. The boys of the district are anxious that arrangements be made so that they too may learn to shoot. Our thanks are due and accorded to Mr Walsh, our station master, for presenting a gold medal for competition, to the ladies who provided tea, coffee and light refreshments, and to all those residents who assisted in clearing and constructing the range etc. It is a matter for congratulations that subscriptions and donations have come in so well as to permit the club to commence operations free of debt and money in hand sufficient to purchase an additional rifle and trophy. Shooting will take place every Saturday afternoon, commencing at 2 o’clock until further notice. *** THE entertainment promised by St Paul’s Club, in aid of the Frankston Branch of Red Cross Fund, eventuated on Wednesday night last and was a pronounced success, not only as far as the artists are concerned, but the sum of £5 17s 6d will be added to the fund. All those who so ably assisted have the satisfaction of knowing their ef-

forts have been the means of helping substantially, such a worthy cause. Before the entertainment commenced two raffles were drawn, viz, a Pug Puppy, which was won by Mrs Jeffries, Spencer street, Clifton Hill, the holder of ticket No 238, and a Doll, given by Mrs Hay, was won by Mr Gordon, holding ticket No 505. Mrs Pownell, who gave the puppy to be raffled in aid of the Lady Stanley fund, will hand over £15 10s, and the doll, which was a penny raffle, has been the means of bringing in 657 pence (£2 14s 9d) to the local fund. On the curtain being raised, an overture was played by Mr Cowan, on the flute, accompanied by his sister. Being master of his instrument and a favorite with the audience, Mr Cowan is much sought after, and although it sometimes means refusing engagements which would be much more profitable to himself, he never disappointments a Frankston audience. Whether in vocal or instrumental items, Mr Cowan is always equally successful and highly appreciated. Miss P. McLean was next on the programme with a recitation entitled “The Amature Rider”, followed by a song by Mr Cowan, called “Breakfast in the bed on Sunday morning”, and with his illustrative yawns, had most of his hearers with their mouths open before the song was finished. Mr Matt Elliott then recited “Dogs of War”. This young man has recently enlisted. From the pages of the Mornington Standard, 4 September, 1915