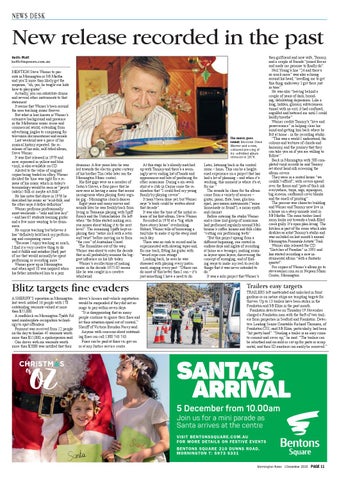 New release recorded in the past Keith Platt keith@mpnews.com.au MENTION Steve Warner to parents in Mornington or Mt Martha and you’ll more than likely get the response, “oh, yes, he taught our kids how to play guitar”. Actually, you can substitute drums and several other instruments to that statement. It seems that Warner’s been around the area teaching music forever. But what is less known is Warner’s extensive background and presence in the Melbourne music scene and commercial world, extending from advertising jingles to composing for television documentaries and serials. Last weekend saw a piece of his musical history repeated: the rerelease of his solo, self-titled album, Steve Warner. It was first released in 1979 and now, repressed in yellow and blue vinyl, is also available on CD. Alerted to the value of original copies being traded on eBay, Warner decided the time was right for a reissue of his music which in today’s terminology would be seen as &quot;psych (adelic) folk or maybe art-folk”. He has notes that show in 1976 he described his music as “acid-folk, and the other says it defies definition”. Warner performs professionally most weekends – “solo and low key” – and has 65 students learning guitar and a few more wanting to be drummers. He enjoys teaching but believes it has “definitely held back my performing and composing career”. “Because I enjoy teaching so much, I find it a very creative thing to do and it fulfils and satisfies [that] part of me that would normally be spent performing or recording more.” Warner grew up in Mornington and when aged 10 was inspired when his father introduced him to a jazz

The music goes round: Musician Steve Warner and a new, coloured pressing of his self-titled album released in 1979.

drummer. A few years later he was led towards the electric guitar curtesy of his brother Tim (who later ran the Mornington Music centre). His first gigs were as a member of Satan’s Slaves, a four-piece that he now sees as having a name that seems incongruous when playing thwir regular gig - Mornington church dances. Eight years and many moves and sounds later he was freshly back from living in Tasmania playing with Spiff Rouch and the Untouchables. He left when “the fellas started making serious noises about taking it to the next level”. The remaining Spiffs kept exploring their “satire rock with a retro surf twist” before moving on to form “the core” of Australian Crawl. The formalities out of the way, Warner was about to enter the decade that in all probability remains the biggest influence on his life today. Warner’s recollections of making music in the decade 1975-85 seems like he was caught in a creative whirlwind.

At this stage he’s already matched up with Tammy and there’s a seemingly never ending list of bands and appearances and bits of producing for other musicians. During a six-week stint at a club in Cairns came the realisation that “I could feed my young family by playing covers”. It hasn’t been done yet, but Warner says “a book could be written about that decade”. It was also the time of the initial release of his first album, Steve Warner. Recorded in 1976 at a “big white three-storey house” overlooking Hobart, Warner tells of borrowing a trail bike to make it up the steep road each day. There was no rush to record and he experimented with slowing tapes and, for one track, fitting his guitar with “weird rope-core strings”. Looking back, he sees he was obsessed with playing every instrument, singing every part: “Others can do most of this better than I can – it’s just something I have a need to do.

driver’s licence and vehicle registration would be suspended if they did not arrange to pay within seven days. “It is disappointing that so many people continue to ignore their fines and let their situation spiral out of control,” Sheriff of Victoria Brendan Facey said. Anyone with concerns about outstanding fines can call 1300 743 743. Fines can be paid at fines.vic.gov.au or at any Justice service centre.

Later, listening back in the control room – hmm. This can be a heightened experience on a project that has had a lot of planning – and when it’s working, this moment is where it&#39;s at, for me.” The sounds he chose for the album come from a variety of sources – guitar, piano, flute, bass, glockenspiel, percussion instruments (“some homemade or found”), a mono synth and clarinet. Before entering the studio Warner and a close knit group of musicians had performed regularly around Melbourne’s coffee houses and folk clubs “cutting our performing teeth”. “But this project sprang from a different beginning, one rooted in endless days and nights of recording at home as a teenager, making music in layers upon layers, discovering the concept of arranging, and of finding ways to make my reel-to-reel do things that it was never intended to do.” It was a solo project that Warner’s

then girlfriend and now wife, Tammy, and a couple of friends “joined forces and made me promise to finally do”. Neil Young’s line &quot;24 and there&#39;s so much more&quot; was also echoing around his head, “needling me to get this thing underway. I got there just in time”. He was also “leaving behind a couple of years of dark, brooding, debilitating depression. Like a long, hidden, gloomy, subterranean tunnel with no exit, it had confused, engulfed and battered me until I could hardly breathe”. Warner credits Tammy’s “love and perseverance” in helping clear his mind and getting him back where he felt at home - in the recording studio. “This was a world I understood, the colours and textures of chords and harmony, and the journey that they can take you on if you are willing to follow.” Back in Mornington with 500 completed vinyl records he and Tammy set about hand silk screening the album covers. They were in a rented house “we couldn’t afford”, with covers spread over the floors and “pots of thick ink everywhere, turps, rags, squeegees, big screens, cardboard cover blanks and the smell of printing”. The process was character building and Warner and Tammy now live in a house on a steep unmade road in Mt Martha. The main timber lined room looks out towards a bush-filled creek gully. It’s open plan living. The kitchen is part of the room which also doubles as artist Tammy’s studio and was included on last month’s annual Mornington Peninsula Artists’ Trail. Warner also released the CD &quot;Sketches of Paradise&quot; in 1991 and has started recording a new instrumental album “with a fantastic quartet”. For copies of Warner’s album go to stevewarner.com.au or Nepean Music Centre, Mornington.

Trailers easy targets TRAILERS left unattended and unlocked in front gardens or on nature strips are tempting targets for thieves. Up to 13 trailers have been stolen in the Frankston and Mt Eliza in the past month. Frankston detectives on Thursday 19 November charged a Frankston man with the theft of two trailers from properties in Seaford and Frankston. Detective Leading Senior Constable Richard Thomson, of Frankston CIU, said Mt Eliza, particularly, had been “hit pretty hard”. “Stealing a trailer is an easy crime to commit and cover up,” he said. “The trailers can be rebirthed and on-sold or cut up for parts or scrap metal, and their ID numbers can easily be removed.”

5 December from 10.00am Join us for a mini parade as Santa arrives at the centre VISIT BENTONSSQUARE.COM.AU FOR MORE DETAILS ON FESTIVE EVENTS BENTONS SQUARE 210 DUNNS ROAD, MORNINGTON T: 5973 5331