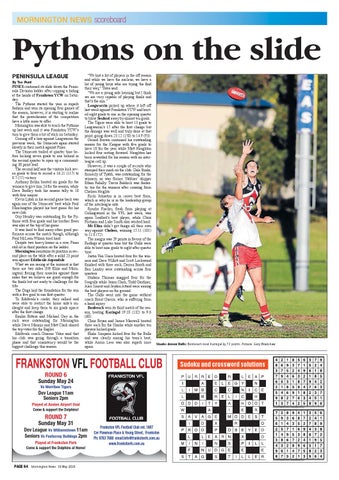 Pythons on the slide PENINSULA LEAGUE By Toe Punt PINES continued its slide down the Peninsula Division ladder after copping a hiding at the hands of Frankston YCW on Saturday. The Pythons started the year in superb fashion and won its opening four games of the season, however, it is starting to realise that the powerhouses of the competition have a little more to offer. Mornington was able to touch the Pythons up last week and it was Frankston YCW’s turn to give them a bit of stick on Saturday. Coming off a loss against Langwarrin the previous week, the Stonecats again started slowly in their match against Pines. The Stonecats trailed at quarter time before kicking seven goals to one behind in the second quarter to open up a commanding 38 point lead. The second half saw the visitors kick seven goals to four to record a 16.21 (117) to 8.7 (55) victory. Anthony Bruhn booted six goals for the winners to give him 24 for the season, while Dave Bodley took his season tally to 18 with four majors. Kevin Lylak in his second game back was again one of the Stonecats’ best while Paul Minchington played his best game for his new club. Guy Hendry was outstanding for the Pythons with four goals and his brother Beau was also at the top of his game. It was hard to find many other good performers across the match though, although Paul McLean-Wilson tried hard. Despite two heavy losses in a row, Pines still sit in third position on the ladder. Mornington maintains its position in second place on the table after a solid 23 point win against Edithvale-Aspendale. What we are seeing at the moment is that there are two sides (Mt Eliza and Mornington) flexing their muscles against those sides that we believe are good enough for the finals but not ready to challenge for the title. The Dogs laid the foundation for the win with a five goal to one first quarter. To Edithvale’s credit, they rallied and were able to restrict the home side’s onslaught and keep them to six goals apiece after the first change. Emilio Bitters and Michael Gay in the ruck were outstanding for Mornington while Steve Mannix and Matt Clark shared the top votes for the Eagles. Edithvale coach Graeme Yates said that his club was going through a transition phase and that consistency would be the biggest challenge this season.

“We lost a lot of players in the off season and while we have the nucleus, we have a lot of young boys who are trying the find their way,” Yates said. “We are a young side learning but I think we are very capable of playing finals and that’s the aim.” Langwarrin picked up where it left off last week against Frankston YCW and booted eight goals to one in the opening quarter to blow Seaford away by almost ten goals. The Tigers were able to boot 13 goals to Langwarrin’s 15 after the first change but the damage was well and truly done at that point, going down 23.12 (150) to 14.9 (93). Gerard Brown continued his outstanding season for the Kangas with five goals to have 18 for the year while Matt Naughton kicked four resting forward. Naughton has been rewarded for his season with an interleague call up. However, it was a couple of recruits who stamped their mark on the club. Dale Binks, formerly of Tyabb, was outstanding for the winners, as was former Yabbies’ skipper Ethan Rahilly. Travis Baldock was fantastic too for the winners after crossing from Chelsea Heights. Ricki Johnston is in career best form, which is why he is in the leadership group of the interleague side. Rourke Fischer, fresh from playing at Collingwood in the VFL last week, was again Seaford’s best player, while Chris Fortnam and Luke Smith also worked hard. Mt Eliza didn’t get things all their own way against Chelsea, winning 15.11 (101) to 11.6 (72). The margin was 29 points in favour of the Redlegs at quarter time but the Gulls were able to boot nine goals to eight after quarter time. Justin Van Unen booted four for the winners and Dave Willett and Scott Lockwood finished with three each, Darren Booth and Ben Landry were outstanding across four quarters. Hudson Thomas snagged four for the Seagulls while Jason Clark, Todd Gardiner, Alex Smout and Jayden Attard were among the best players on the ground. The Gulls went into the game without coach Brent Guerra, who is suffering from a hand injury. Bonbeach won its third match of the season, beating Karingal 19.18 (132) to 9.6 (60). Chris Bryan and James Maxwell booted three each for the Sharks while another ten players kicked goals. Blake Simpson kicked four for the Bulls and was clearly among his team’s best, while Aaron Lees was also superb once again.

ROUND 7 Sunday May 31 Dev League Vs Williamstown 11am Seniors Vs Footscray Bulldogs 2pm Played at Frankston Park Come &amp; support the Dolphins at Home!