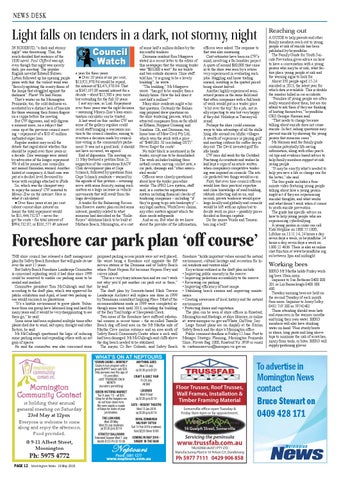 Light falls on tenders in a dark, not stormy, night IN ROSEBUD, “a dark and stormy night” was threatening. This, the much-derided first sentence of the 1830 novel Paul Clifford was apt, even though this night was merely dark, pre-meeting. The popular English novelist Edward BulwerLytton followed up his opening purple prose with this: the violent wind was “fiercely agitating the scanty flame of the lamps that struggled against the darkness”. Phew! We had Neons. That’s winter on the Mornington Peninsula, too, the cold darkness exacerbated by a distinct lack of biscuits for those warming their frozen fingers on a cuppa before the meeting. But CW digresses, and will digress a moment more, on a subject that came up at the previous council meeting – repayment of a $10.45 million unfunded super loan. Regular readers may recall the debate that raged about whether this should be repaid over three years or a decade. Dire warnings were issued by advocates of the longer repayment. We’d all be rooned, one councillor not named Hanrahan warned. Another hinted at conspiracy. A third case was put at a decibel level favoured by teens with earplugs attached to iPods. So, which was the cheapest way to repay the money? CW resorted to Money-Zine on the internet. Here is what it calculated:  Over three years at six per cent (about current shire interest on loans) the total repayment would be $11,444,732.87 – never forget the cents – for total interest of $994,732.87, or $331,577.49 interest

a year for three years.  Over 10 years at six per cent, $13,921,970.94 would be repaid, for interest of $3,471,970.94. That is $347,197.09 annual interest for a decade – about $15,500 a year more but extending for the full 10 years. I rest my case, m’Lud. Repayment over three years was the right decision – assuming Money-Zine’s loan amortisation calculator can be trusted. A last word on this: neither CW nor some of the gallery regulars could recall staff bringing a rescission motion to the council chamber, aiming to overturn a decision made by councillors voting in the community's parliament. It was not a good look: it should not have occurred, we agreed. End of digression. The meeting on 11 May featured a petition from 21 supporters of the contentious RACV Club development plan at Cape Schanck, followed by questions from Cape Schanck residents – warned by the agenda of this petition – returning serve with some ferocity, raising such matters as a large increase in vehicle movements that will result from the huge development. A tender for the Balnarring Recreation Reserve master plan excited some interest, possibly related to what someone had described as the “RollsRoyce” ablutions block to be built at Mothers Beach, Mornington, at a cost

of some half a million dollars by the successful tenderer. Dromana resident Ron Musgrove stated in a recent letter to the editor of this newspaper that the winning tender was “$83,000 a seat” for six toilets and two outside showers. Shire staff told him “it is going to be a lovely building”, he wrote. “The building,” Mr Musgrove wrote. “has got to be smaller than a family home. How the hell does it cost half a million?” Many shire residents might echo that question. Certainly the Balnarring proposal drew questions on the shire tendering process, which attracted companies from as far afield as Eltham, Hoppers Crossing and Sunshine. Oh, and Dromana, too, home base of Maw Civil Pty Ltd, which won the work with a price of “$469,081.50 (excluding GST)”. Never forget the cents! No toilet block is mentioned in the tender, except one to be demolished. The work includes building three netball courts, moving cricket nets, a car park, drainage and “other associated works”. Officers were closely questioned about how the tender procedure works. The iPRO Live system, staff said, is a contractor registration system including financial checks of tendering companies – including “if they’re going to go into bankruptcy” – any legal matters, WorkCover claims, any other matters against which the shire needs safeguards. And so on. But what do we know about the provider of the information,

officers were asked. The response to that was also reassuring. Cost estimates have been on CW’s mind, involving a far humbler project. A quote of around $60,000 that came in to the shire was seen by a retiree very experienced in evaluating such jobs. Haggling and horse trading ensued, resulting in the quoted priced being almost halved. Another highly experienced semiretired person in the same field said that often companies with a full book of work would put in a tender price “a bit over the top” for a job, not really expecting to win but very happy if they did. Holidays in Tuscany all round. Perhaps the shire could examine ways to take advantage of all the skills lying idle around our idyllic villages. A wealth of experience is playing golf and meeting cobbers for coffee day in day out. The Devil invented golf for idle hands. CW once did work for the Certified Practising Accountants and wishes he had kept a copy of an article written when compulsory competitive tendering was imposed on councils. The article predicted two things would occur. First, that over time council officers would lose their practical expertise and close knowledge of road building, rubbish collecting and so on, and second, private tenderers would grow large locally and globally and councils would be left with no option but to decide work on price – possibly prices decided in foreign capitals. Do the names Veiola and Transurban ring a bell?

Foreshore car park plan ‘off course’ THE shire council has released a draft management plan for Safety Beach foreshore that will guide its use over the next 15 years. But Safety Beach Foreshore Landscape Committee is concerned replanting work it had done since 1999 could be removed to enable car parking areas to be sealed and marked. Committee president Tom McCullough said that according to the draft plan, which was approved for public exhibition mid-April, at least two parking areas would encroach on plantations. “It’s a hostile environment to grow plants. Volunteers from our group have laboured long and hard for many years and it would be very disappointing to see them go,” he said. Some areas had been replanted multiple times after plants died due to wind, salt spray, drought and other factors, he said. Mr McCullough questioned the logic of reducing some parking areas and expanding others with no net gain of spaces. He said the committee was also concerned some

proposed parking access points were not well placed, the worst being a foreshore exit opposite the BP service station at the Dromana end of Safety Beach where Point Nepean Rd becomes Nepean Hwy and curves inland. “This is a very busy intersection and we can’t work out why you’d put another car park exit in there,” he said. The draft plan by Sorrento-based Mark Travers Landscape Architect will replace one done in 1999 by Tasmanian consultant Inspiring Place. Most of the recommendations made in 1999 were completed although some took until 2013, including the building of the Bay Trail bridge at Sheepwash Creek. Two areas of the foreshore have suffered substantial erosion in recent times – the so-called Tassells Beach dog off-lead area on the Mt Martha side of Martha Cove marina entrance and an area south of Safety Beach Community Centre where a rock wall had been damaged. Mr McCullough said cliffs above the dog beach needed to be stabilised. The mayor, Cr Bev Colomb, said Safety Beach

foreshore “holds important values around the natural environment, cultural heritage and recreation for local residents and visitors alike”. Key actions outlined in the draft plan include: • Improving public amenity in the reserve. • Improving pedestrian accessibility to the reserve. • Reviewing car parking. • Improving efficiency of boat ramps. • Stabilising beach erosion and improving maintenance. • Creating awareness of local history and the natural environment. • Protecting dunes and vegetation. The plan can be seen at shire offices in Rosebud, Mornington and Hastings; at shire libraries; or online at: www.mornpen.vic.gov.au/Whats_On/Your_Say Large format plans are on display at the Atrium Safety Beach and the shire’s Mornington office. Public comment deadline is Friday 12 June. Post to Manager Strategic Planning, Mornington Peninsula Shire, Private Bag 1000, Rosebud Vic 3939 or email to: customerservice@mornpen.vic.gov.au

Reaching out A GUIDE to help parents and other family members reach out to young people at risk of suicide has been published by beyondblue. The Family Guide for Youth Suicide Prevention gives advice on how to have a conversation with a young person who may be at risk, what factors place young people at risk and the warning signs to look for. About 350 people aged 15-24 suicided in 2013, the latest year for which data is available. This is double the number killed in car accidents. “Families of young people are often really worried about them, but are too afraid to ask them if they are thinking of hurting themselves,” beyondblue CEO Georgie Harman said. “That needs to change because talking about suicide does not cause suicide. In fact, asking questions may prevent suicide by showing the young person that someone cares.” Ms Harman said the family guide contains potentially life-saving information, along with other practical tips and evidence based advice to help family members support at-risk young people. “It may be exactly what’s needed to help you save a life or change one for the better,” she said. The free guide includes a fourminute video featuring young people talking about how a young person might act if they are experiencing suicidal thoughts, and what works and what doesn’t work when it comes to youth suicide prevention. The guide has specific advice on how to help young people who are experiencing cyberbullying. A young person in crisis can call Kids Helpline on 1800 55 1800; Lifeline on 13 11 14, 24 hours a day seven days a week; or beyondblue 24 hours a day, seven days a week on 1300 22 4636. There is also an online chat function at www.beyondblue.org. au between 3pm and midnight.

Working bees BERG Mt Martha holds Friday working bees 10am-noon. Inquiries to Sue Betheras 0408 808 201 or Liz Barraclough 0408 388 430. Tuesday morning bees are held on the second Tuesday of each month 9am-noon. Inquiries to Jenny Selby 0432 719 288 or 59742402. Those attending should wear hats and sunscreen in the warmer months and bring their own water. BERG members will also have drinking water on hand. Wear sturdy boots or shoes, long pants and long sleeve tops to minimise the risk of scratches, injury from tools, or bites. BERG will supply gardening gloves.

Mornington Community Contact is holding their annual general meeting on Saturday 23rd May at 12pm. Everyone is welcome to come along and enjoy the afternoon. Food provided.