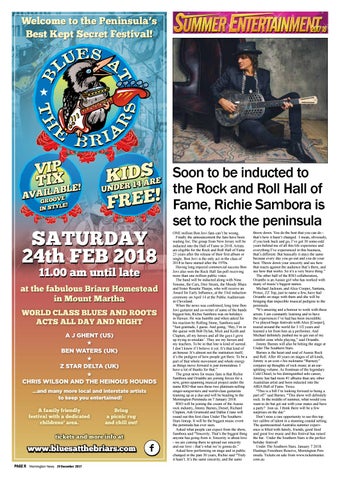 Soon to be inducted to IRD14S K ARE E UND the Rock and Roll Hall of ! E E FR Fame, Richie Sambora is

at the fabulous Briars Homestead in Mount Martha WORLD CLASS BLUES AND ROOTS ACTS ALL DAY AND NIGHT A J GHENT (US) BEN WATERS (UK) Z STAR DELTA (UK) CHRIS WILSON AND THE HEINOUS HOUNDS ...and many more local and interstate artists to keep you entertained! A family friendly festival with a dedicated childrens’ area.

Bring a picnic rug and chill out!

tickets and more info at

set to rock the peninsula

ONE million Bon Jovi fans can’t be wrong. Finally the announcement the fans have been waiting for; The group from New Jersey will be inducted into the Hall of Fame in 2018. Artists are eligible for the Rock and Roll Hall of Fame 25 years after the release of their first album or single. Bon Jovi is the only act in the class of 2018 to have started after the 1970s. Having long enjoyed commercial success Bon Jovi also won the Rock Hall fan poll receiving more than one million public votes. The band will be inducted along with Nina Simone, the Cars, Dire Straits, the Moody Blues and Sister Rosetta Tharpe, who will receive an Award for Early Influence, at the 33rd induction ceremony on April 14 at the Public Auditorium in Cleveland. When the news was confirmed, long time Bon Jovi guitarist and co-writer of some of the bands biggest hits, Richie Sambora was on holidays in Hawaii. He was humble and when asked for his reaction by Rolling Stone, Sambora said “Just gratitude, I guess. And going, ‘Hey, I’m in the queue with Bob Dylan, Mick and Keith and Clapton, all my heroes and all the guys I grew up trying to emulate’. They are my heroes and my teachers. To be in that line is kind of surreal. I don’t know if I believe it yet. It’s that kind of an honour. It’s almost not the institution itself; it’s the pedigree of how people got there. To be a part of that whole movement and whole energy as things move forward is just tremendous. I have a lot of thanks for that.” The great news for music fans is that Richie Sambora and Orianthi are joining forces for a new, genre-spanning musical project under the name RSO that sees these two platinum-selling singer-songwriters and world-class guitarists teaming up as a duo and will be heading to the Mornington Peninsula on 7 January 2018. RSO will be joining the cream of the Aussie rock industry, Jimmy Barnes, Diesel, Richard Clapton, Ash Grunwald and Dallas Crane will round out this first class Under The Southern Stars lineup. It will be the biggest music event the peninsula has ever seen. Asked what people can expect from the show, Sambora said “Sincerity. That’s the biggest thing anyone has going from it. Sincerity is about love - we are coming there to spread our sincerity and our love - that’s what we’re gonna do.” Asked how performing on stage and in public changed in the past 30 years, Richie said “Truly it hasn’t. It’s the same sincerity, and the same

throw down. You do the best that you can do that’s how it hasn’t changed. I mean, obviously, if you look back and go, I’ve got 30 some-odd years behind me of all this life experience and everything I’ve experienced in this business, that’s different. But basically it stays the same because every day you go out and you do your best. Throw down your sincerity and see how that reacts against the audience that’s there, and see how that works. So it’s a very brave thing.” The other half of the RSO collaboration, Orianthi is an Aussie girl who has worked with many of music’s biggest names. Michael Jackson, and Alice Cooper, Santana, Prince, ZZ Top, just to name a few, have had Orianthi on stage with them and she will be bringing that impecible musical pedigree to the peninsula. “It’s amazing and a honour to work with these artists. I am constantly learning and to have the experiences I’ve had has been incredible. I’ve played huge festivals with Alice [Cooper], toured around the world for 3 1/2 years and learned a lot from him as a performer. And Michael definitely pushed me to get out of my comfort zone while playing,” said Orianthi. Jimmy Barnes will also be hitting the stage at Under The Southern Stars. Barnes is the heart and soul of Aussie Rock and Roll. After 40 years on stages of all kinds, Jimmy is an icon – his nickname “Barnesy” conjures up thoughts of rock music at an earsplitting volume. As frontman of the legendary Cold Chisel, to his distinguished solo career, Jimmy has had more #1 albums than any other Australian artist and been inducted into the ARIA Hall of Fame. Twice. “This is a bill I’m looking forward to being a part of!” said Barnes. “This show will definitely rock. In the middle of summer, what would you want to do but get out with your mates and have a party? Join us. I think there will be a few surprises on the day” Don’t miss a rare opportunity to see this top tier calibre of talent in a stunning coastal setting. The quintessential Australia summer experience is filled with family, friends, good food and great live music and this festival has raised the bar. Under the Southern Stars is the perfect holiday festival! Under The Southern Stars. January 7 2018. Hastings Foreshore Reserve, Mornington Peninsula. Tickets on sale from www.ticketmaster. com.au