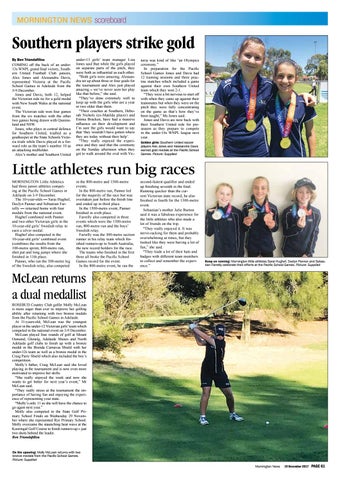 Southern players strike gold By Ben Triandafillou COMING off the back of an under13s WNPL grand final victory, Southern United Football Club juniors, Alex Jones and Alessandra Davis, represented Victoria at the Pacific School Games in Adelaide from the 3-9 December. Jones and Davis, both 12, helped the Victorian side tie for a gold medal with New South Wales at the national event. The Victorian side won four games from the six matches with the other two games being drawn with Queensland and NSW. Jones, who plays in central defence for Southern United, trialled as a goalkeeper at the State Schools Victoria trials while Davis played in a forward role as the team’s number 10 as an attacking midfielder. Alex’s mother and Southern United

under-13 girls’ team manager Lisa Jones said that while the girls played on separate parts of the pitch, they were both as influential as each other. “Both girls were amazing. Alessandra set up about three or four goals for the tournament and Alex just played amazing – we’ve never seen her play like that before,” she said. “They’ve done extremely well to keep up with the girls who are a year or two older than them. “Their coaches at Southern, Deborah Nichols (ex-Matilda player) and Emma Bracken, have had a massive influence on their development and I’m sure the girls would want to say that ‘they wouldn’t have gotten where they are today without their help’. “They really enjoyed the experience and they said that the ceremony on the Sunday afternoon when they got to walk around the oval with Vic-

toria was kind of like ‘an Olympics ceremony.” In preparation for the Pacific School Games Jones and Davis had 12 training sessions and three practise matches which included a game against their own Southern United team which they won 2-1. “They were a bit nervous to start off with when they came up against their teammates but when they were on the pitch they were fully concentrating on the game as that’s how they’ve been taught,” Ms Jones said. Jones and Davis are now back with their Southern United side for preseason as they prepare to compete in the under-14s WNPL league next year. Golden girls: Southern United soccer players Alex Jones and Alessandra Davis earned gold medals at the Pacific School Games. Picture: Supplied

second-fastest qualifier and ended up finishing seventh in the final. Running quicker than the current Victorian state record, he also finished in fourth for the 1500-metre event. Sebastian’s mother Julie Burton said it was a fabulous experience for the little athletes who also made a lot of friends on the trip. “They really enjoyed it. It was nerve-racking for them and probably overwhelming at times, but they looked like they were having a lot of fun,” she said. “They trade a lot of their hats and badges with different team members to collect and remember the experience.”

ROSEBUD Country Club golfer Molly McLean is more eager than ever to improve her golfing ability after returning with two bronze medals from the Pacific School Games in Adelaide. At 11-years-old, McLean was the youngest player in the under-12 Victorian girls’ team which competed in the national event on 3-9 December. McLean played four rounds of golf at Mount Osmond, Glenelg, Adelaide Shores and North Adelaide golf clubs to finish up with a bronze medal in the Brenda Carnavas Shield with her under-12s team as well as a bronze medal in the Craig Parry Shield which also included the boy’s competition. Molly’s father, Craig McLean said she loved playing in the tournament and is now even more motivated to improve her skills. “She really enjoyed the week and now she wants to get better for next year’s event,” Mr McLean said. “They really stress at the tournament the importance of having fun and enjoying the experience of representing your state. “Molly’s only 11 so she will have the chance to go again next year.” Molly also competed in the State Golf Primary School Finals on Wednesday 29 November where she represented Rye Primary School. Molly overcame the staunching heat wave at the Kooringal Golf Course to finish runners-up – just two shots behind the leader. Ben Triandafillou