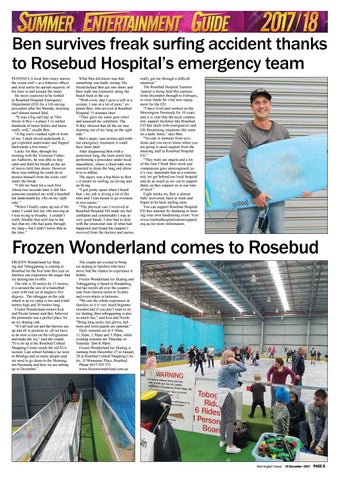 Ben survives freak surfing accident thanks to Rosebud Hospital’s emergency team PENINSULA local Ben Amey knows the ocean well – as a fisheries officer and avid surfer he spends majority of his time in and around the water. He never expected to be rushed to Rosebud Hospital Emergency Department (ED) for a life-saving procedure after his Monday morning surf almost turned fatal. “It was a big surf day at Tibir Street in Rye – a place I’ve surfed hundreds of times before and know really well,” recalls Ben. “A big wave crashed right in front of me. I duck-dived underneath it, got exploded underwater and flipped backwards a few times.” Lucky for Ben, through his training with the Victorian Fisheries Authority, he was able to stay calm and hold his breath as the set of waves held him down. However there was nothing he could do to protect himself from the rocky reef under the break. “I felt my back hit a rock first. About two seconds later it felt like someone smashed me with a baseball bat underneath my ribs on my right side.” “When I finally came up out of the water I could feel my ribs moving as I was trying to breathe. I couldn’t really breathe that well due to the fact that my ribs had gone through my lung – but I didn’t know that at the time.”

What Ben did know was that something was badly wrong. His friend helped Ben get into shore and then walk one kilometre along the beach back to the car. “With every step I gave a yell or a scream, I was in a lot of pain,” explains Ben, who arrived at Rosebud Hospital 15 minutes later. “They gave me some pain relief and assessed my condition. The X-Ray showed that all the air was draining out of my lung on the right side.” Ben’s injury was serious and without emergency treatment it could have been fatal. After diagnosing Ben with a punctured lung, the team acted fast, performing a procedure under local anaesthetic, where a chest tube was inserted to drain the lung and allow it to re-inflate. The injury was a big blow to Ben – it meant no surfing, no diving and no flying. “I got pretty upset when I heard that – my job is diving a lot of the time and I was meant to go overseas in two weeks.” “The physical care I received at Rosebud Hospital ED made me feel confident and comfortable I was in very good hands. I also had to deal with the emotional side of what had happened and found the support I received from the doctors and nurses

really got me through a difficult situation.” The Rosebud Hospital Summer Appeal is being held this summer from December through to February, to raise funds for vital new equipment for the ED. “I have lived and worked on the Mornington Peninsula for 10 years and it is vital that the local community support facilities like Rosebud ED that deals with emergencies and life threatening situations like mine on a daily basis,” says Ben. “No-one is immune from accidents and you never know when you are going to need support from the amazing staff at Rosebud Hospital ED.” “They truly are angels and a lot of the time I think their work and compassion goes unrecognised, so it’s very important that as a community we get behind our local hospital and do as much as we can to support them, as they support us in our time of need.” Eight weeks on, Ben is almost fully recovered, back at work and hopes to be back surfing soon. You can support Rosebud Hospital ED this summer by donating or hosting your own fundraising event. Visit www.rosebudhospitalsummerappeal. org.au for more information.

Frozen Wonderland comes to Rosebud FROZEN Wonderland Ice Skating and Tobogganing is coming to Rosebud for the first time this year so families can experience the magic that ice skating has to offer. The rink is 30 metres by 15 metres; it is around the size of a basketball court with real ice at negative five degrees. The toboggan on the side which is an ice ramp is two and a half metres high and 30 metres long. Frozen Wonderland owners Ken and Nicole Jensen said they believed the peninsula was a perfect place for an ice skating rink. “It’s all laid out and the barriers are up and all in position so all we have to do now is turn on the refrigeration and make the ice,” said the couple. “It is set up at the Rosebud Central Shopping Centre inside the old IGA section. Last school holidays we were in Bendigo and so many people said we need to go down to the Mornington Peninsula and here we are setting up in December.”

The couple are excited to bring ice skating to families who have never had the chance to experience it before. Frozen Wonderland Ice Skating and Tobogganing is based in Bundaberg, but has travels all over the countryside from Darwin down to Sydney and everywhere in between. “We aim the whole experience at families so it is very much beginner oriented and if you don’t want to try ice skating, then tobogganing is also so much fun,” said Ken and Nicole. “Bring long socks, but gloves, helmets and wrist guards are optional.” Daily sessions are at 9.30am, 11.30am, 1.30pm and 3.30pm, while evening sessions are Thursday to Saturday 7pm-8.30pm. Frozen Wonderland Ice Skating is running from December 27 to January 28 at Rosebud Central Shopping Centre, 35 Wannaeue Place, Rosebud. Phone 0437 929 373. www.frozenwonderland.com.au