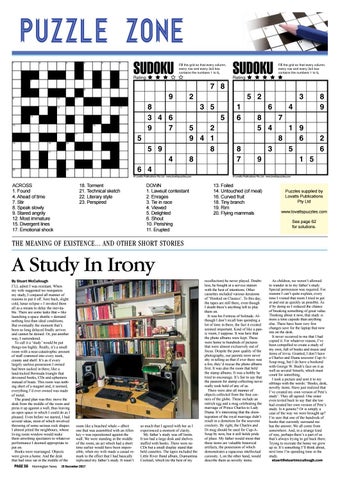 A Study In Irony By Stuart McCullough I’LL admit I was resistant. When my wife suggested we reorganize my study, I conjured all manner of reasons to put it off. Sore back, slight cold, lunar eclipse – I invoked them all as a means to delay the inevitable. There are some tasks that – like launching a space shuttle – demand nothing less than ideal conditions. But eventually the moment that’s been so long delayed finally arrives and cannot be denied. Or, put another way, I surrendered. To call it a ‘study’ would be put things too highly. Really, it’s a small room with a near-catastrophic amount of stuff crammed into every nook, cranny and shelf. It’s as if every largely useless possession I owned had been sucked in there, like a land-locked Bermuda triangle that devoured books, CDs and ephemera instead of boats. This room was nothing short of a magnet and, it seemed, everything I’d ever owned was made of metal. The grand plan was this: move the desk from the middle of the room and press it up against a wall, thus leaving an open space in which I could do as I pleased. Even before we started, I had several ideas, most of which involved throwing of some serious rock shapes. I almost pitied the neighbours, whose living room window would make them unwitting spectators to whatever performance I deemed appropriate to put on. Books were rearranged. Objects were given a home. And the desk that had once sat in the middle of the

room like a beached whale – albeit one that was assembled with an Allen key – was repositioned against the wall. We were standing in the middle of the room, an act which had a short time earlier would have been impossible, when my wife made a casual remark to the effect that I had basically replicated my father’s study. It wasn’t

so much that I agreed with her as I experienced a moment of clarity. My father’s study was off limits. It too had a large desk and shelves stuffed with books. There were no CDs but a small display stand that held cassettes. The tapes included the Little River Band album, Diamantina Cocktail, which (to the best of my

recollection) he never played. Doubtless, he bought at a service station with the best of intentions. Other cassettes included various iterations of ‘Hooked on Classics’. To this day, the tapes are still there, even though I doubt there’s anything left to play them on. It was his Fortress of Solitude. Although I don’t recall him spending a lot of time in there, the fact it existed seemed important. Kind of like a panic room, I suppose. It was here that the photo albums were kept. These were home to hundreds of pictures that were almost exclusively out of focus. Despite the poor quality of the photography, our parents were never shy in telling us that if ever there was a fire, they’d rescue the photo albums first. It was also the room that held the stamp albums. It was a hobby he tried to encourage. It’s fair to say that the passion for stamp collecting never really took hold of any of us. There were also all manner of objects collected from the four corners of the globe. These include an ostrich egg and a mug celebrating the marriage of Prince Charles to Lady Diana. It’s interesting that the disintegration of the royal marriage didn’t result in a demotion for the souvenir crockery. By right, the Charles and Di mug should be used for Cup-ASoup by now, but it still holds pride of place. My father would insist that these items are valuable historical artifacts, the possession of which demonstrates a rapacious intellectual curiosity. I, on the other hand, would describe them as novelty items.

As children, we weren’t allowed to wander in to my father’s study. Special permission was required. For reasons I can’t quite explain, every time I visited that room I tried to get in and out as quickly as possible. As if by doing so I reduced the chance of breaking something of great value. Thinking about it now, that study is more a time capsule than anything else. There have been very few changes save for the laptop that now sits on the desk. It never occurred to me that I had copied it. For whatever reason, I’ve been compelled to create a study of my own, full of books and music and items of trivia. Granted, I don’t have a Charles and Diana souvenir Cup-ASoup mug, but I do have a bookend with George W. Bush’s face on it as well as several Smurfs, which must count for something. I took a picture and sent it to my siblings with the words: ‘Books, desk, novelty items. Have just realized that I’ve created my own version of Pete’s study’. They all agreed. One sister even texted back to say that she too had created her own version of Pete’s study. Is it genetic? Or is simply a case of the way we were brought up? I’m sure that one of the hundreds of books that currently surround me has the answer. We all come from somewhere. And, in a strange kind of way, perhaps there’s a part of us that’s always trying to get back there. Trying to recreate the home we grew up in. It’s something I’ll think about, next time I’m spending time in the study. stuart@stuartmccullough.com