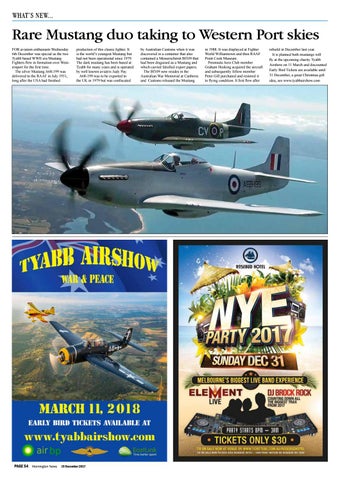 Rare Mustang duo taking to Western Port skies FOR aviation enthusiasts Wednesday 6th December was special as the two Tyabb based WWII era Mustang Fighters flew in formation over Westernport for the first time. The silver Mustang A68-199 was delivered to the RAAF in July 1951, long after the USA had finished

production of this classic fighter. It is the worldâ&#x20AC;&#x2122;s youngest Mustang but had not been operational since 1979. The dark mustang has been based at Tyabb for many years and is operated by well known aviatrix Judy Pay. A68-199 was to be exported to the UK in 1979 but was confiscated

by Australian Customs when it was discovered in a container that also contained a Messerschmitt Bf109 that had been disguised as a Mustang and which carried falsified export papers. The Bf109 now resides in the Australian War Memorial at Canberra and Customs released the Mustang

in 1988. It was displayed at Fighter World Williamtown and then RAAF Point Cook Museum. Peninsula Aero Club member Graham Hosking acquired the aircraft and subsequently fellow member Peter Gill purchased and restored it to flying condition. It first flew after

rebuild in December last year. It is planned both mustangs will fly at the upcoming charity Tyabb Airshow on 11 March and discounted Early Bird Tickets are available until 31 December, a great Christmas gift idea, see www.tyabbairshow.com