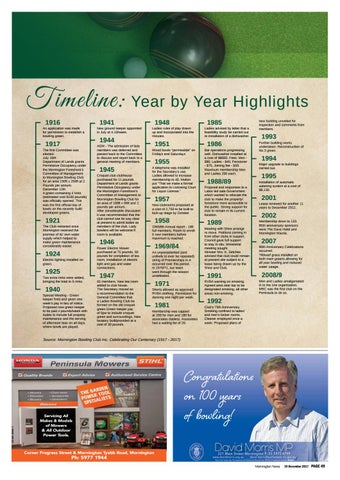 An application was made for permission to establish a bowling green.

The first Committee was elected. July 16th Department of Lands grants Permissive Occupancy under the Mornington Foreshore’s Committee of Management to Mornington Bowling Club for an area 150ft x 250ft at 2 Pounds per annum. December 12th A green containing 4 rinks (estimated cost $100 pounds) was officially opened. This was the first official day of bowls on the recently built/ developed greens.

The Club restarted once Mornington received the promise of its’ own water supply which helped to make green maintenance considerably easier.

Two extra rinks were added, bringing the total to 6 rinks.

Special Meeting - Green keeper fired and given one week’s pay in lieu of notice. Proposed new green keeper to be paid 4 pounds/week with duties to include full property maintenance and the serving of afternoon teas on all days where bowls are played.

AGM - The admission of lady members was deferred and passed back to the Committee to discuss and report back to a general meeting of members.

Croquet club clubhouse purchased for 11 pounds. Department of Lands grants Permissive Occupancy under the Mornington Foreshore’s Committee of Management to Mornington Bowling Club for an area of 100ft x 66ft and 2 pounds per annum. After considerable discussion it was recommended that the club cannot see its way clear at present to admit ladies as members of the club, Lady bowlers will be welcome if room is available.

65 members. New tea room added to club house. The Secretary moved as a recommendation to the General Committee that a Ladies Bowling Club be formed on the old croquet green.Green keeper pay of 6pw to include croquet green and surroundings. New lavatory built/provided at a cost of 30 pounds.

Ladies rules of play drawn up and incorporated into the minutes.

A telephone was installed for the Secretary’s use. Ladies allowed to increase membership to 40. Motion put “That we make a formal application to Licensing Court for Liquor License.”

New clubrooms proposed at a cost of 2,750 to be built to lock-up stage by October

An unprecedented (and unlikely to ever be repeated) string of Premierships in A occurred over this period. In 1970/71, our team went through the season undefeated.

Shorts allowed as approved RVBA clothing. Permission for dancing one night per week.

Membership was capped at 200 for men and 180 for associates (ladies). Associates had a waiting list of 20.

new building unveiled for inspection and comments from members.

Ladies advised by letter that a feasibility study be carried out re installation of a dishwasher.

Proposal and responses to a Labor led sate Government which wanted to relocate the club to make the property/ foreshore more accessible to the public. Strong support for club to remain in its current location.

Meeting with Shire arrange re move. Petitions coming in from other clubs in support. Council gave full support to stay in situ. Ministerial meeting sought. Minister Mrs. K. Setches advised that club could remain at present site subject to a lease being drawn up by the Shire and Club.

RVBA warning on smoking. Agreed area near bar to be designated smoking, all other areas non-smoking.

Major upgrade to buildings carried out.

Installation of automatic watering system at a cost of $8,130.

Lease renewed for another 11 years to December 2012.

Membership down to 133. 85th anniversary sponsors were The Dava Hotel and Mornington Mazda.

Men and Ladies amalgamated in to the one organisation. MBC was the first club on the Peninsula to do so.

Servicing All Makes & Models of Mowers

Congratulations on 100 years of bowling!