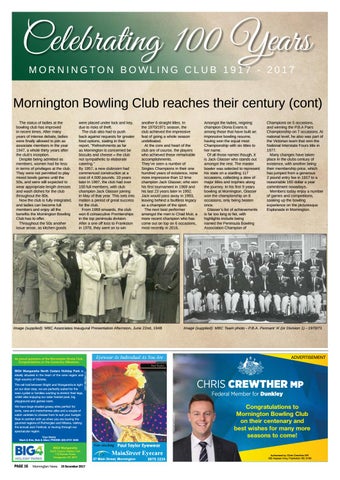 Mornington Bowling Club reaches their century (cont) The status of ladies at the bowling club has improved in recent times. After many years of intense debate, ladies were finally allowed to join as associate members in the year 1947, a whole thirty years after the club’s inception. Despite being admitted as members, women had far less in terms of privileges at the club. They were not permitted to play mixed bowls games until the 50s, and were still expected to wear appropriate length dresses and wash dishes for the club throughout the 80s. Now the club is fully integrated, and ladies can become full members and enjoy all the benefits the Mornington Bowling Club has to offer. Throughout the 50s another issue arose, as kitchen goods

were placed under lock and key, due to risks of theft. The club also had to push back against requests for greater food options, stating in their report, “Refreshments as far as Mornington is concerned be biscuits and cheese – the club not sympathetic to elaborate catering.” By 1957, a new clubroom had commenced construction at a cost of 4,500 pounds. 10 years later in 1967, the club had over 100 full members, with club champion Jack Glasser joining in May of that year. This sets into motion a period of great success for the club. From 1969 onwards, the club won 8 consecutive Premierships in the top peninsula division. After a one off loss to Frankston in 1978, they went on to win

another 6 straight titles. In the 1970/1971 season, the club achieved the impressive feat of going a whole season undefeated. At the core and heart of the club are of course, the players who achieved these remarkable accomplishments. They’ve seen a number of Singles Champions in their one hundred years of existence, none more impressive than 12 time champion Jack Glasser, who won his first tournament in 1969 and his last 23 years later in 1992. Jack would pass away in 1993, leaving behind a faultless legacy as a champion of the sport. The next best performer amongst the men is Chad Muir, a more recent champion who has come out on top on 6 occasions, most recently in 2016.

We have large shaded grassy sites perfect for tents, vans and motorhomes alike and a couple of cabin varieties to choose from to suit your budget. Rest in comfort with us when you are touring the gourmet regions of Rutherglen and Milawa, visiting the annual Jazz Festival, or touring through our spectacular region. Your Hosts Mark & Erin, Bob & Alice | PHONE: (03) 5721 5230

The rail trail between Bright and Wangaratta is right on our door step, we are perfectly suited for the keen cyclist or families wanting to stretch their legs, whilst also enjoying our solar heated pool, big playground and games room.

BIG4 Wangaratta North Cedars Holiday Park is ideally situated in the heart of the wine region and High country of Victoria.

Champions on 5 occasions, and winning the P.B.A Pairs Championship on 7 occasions. At national level, he also was part of the Victorian team that won the National Interstate Fours title in 1977. Many changes have taken place in the clubs century of existence, with another being their membership price, which has jumped from a generous 2 pound entry fee in 1917 to a reasonable 160 dollar a year commitment nowadays. Members today enjoy a number of games and competitions, soaking up the bowling experience on the picturesque Esplanade in Mornington.

As proud sponsors of the Mornington Bowls Club, Congratulations on the Centenary Milestone.

Amongst the ladies, reigning champion Gloria Evans is among those that have built an impressive bowling resume, having won the equal most Championship with six titles to her name. Of all those names though, it is Jack Glasser who stands out amongst the rest. The master bowler was selected to represent his state on a startling 117 occasions, collecting a slew of major titles and trophies along the journey. In his first 9 years bowling at Mornington, Glasser won the championship on 8 occasions, only being beaten once. Glasser’s list of achievements is far too long to list, with highlights include being named the Peninsula Bowling Association Champion of

Congratulations to Mornington Bowling Club on their centenary and best wishes for many more seasons to come!