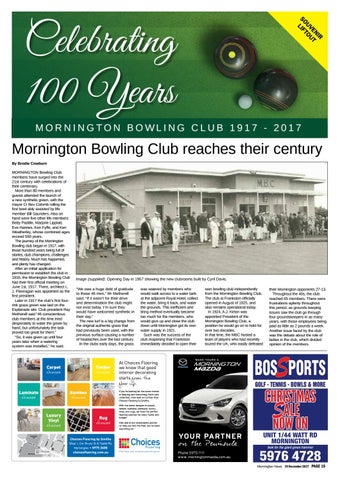 Mornington Bowling Club reaches their century By Brodie Cowburn MORNINGTON Bowling Club members have surged into the 21st century with celebrations of their centenary. More than 80 members and guests attended the launch of a new synthetic green, with the mayor Cr Bev Colomb rolling the first bowl ably assisted by life member Bill Saunders. Also on hand were five other life members: Betty Paddle, Marjorie Lippiatt, Eve Hannes, Ken Fyffe, and Ken Weatherley, whose combined ages exceed 550 years. The journey of the Mornington Bowling club began in 1917, with those hundred years being full of stories, club champions, challenges and history. Much has happened, and plenty has changed. After an initial application for permission to establish the club in 1916, the Mornington Bowling Club had their first official meeting on June 1st, 1917. There, architect L. J. Flannagan was appointed as the first president. Later in 1917 the club’s first fourrink grass green was laid on the Esplanade site. Club president Ray Metherell said “46 conscientious club members at the time tried desperately to water the green by hand, but unfortunately the task proved too great for them.” “So, it was given up until four years later when a watering system was installed,” he said.

Image (supplied): Opening Day in 1957 showing the new clubrooms built by Cyril Davis. “We owe a huge debt of gratitude to those 46 men,” Mr Metherell said. “If it wasn’t for their drive and determination the club might not exist today. I’m sure they would have welcomed synthetic in their day.” The new turf is a big change from the original authentic grass that had previously been used, with the previous surface causing a number of headaches over the last century. In the clubs early days, the grass

own bowling club independently from the Mornington Bowling Club. The club at Frankston officially opened in August of 1925, and also remains operational today. In 1924, A.J. Kirton was appointed President of the Mornington Bowling Club, a position he would go on to hold for over two decades. In that time, the MBC hosted a team of players who had recently toured the UK, who easily defeated

their Mornington opponents 27-13. Throughout the 40s, the club reached 65 members. There were frustrations aplenty throughout this period, as grounds keeping issues saw the club go through four groundskeepers in as many years, with those employees being paid as little as 2 pounds a week. Another issue faced by the club was the debate about the role of ladies in the club, which divided opinion of the members.

At Choices Flooring we know that good interior decorating starts

If you’re looking for the latest trends in flooring and everything that’s new underfoot, then look no further than Choices Flooring by Smiths.

was watered by members who would walk across to a water tank at the adjacent Royal Hotel, collect the water, bring it back, and water the grounds. This inefficient and tiring method eventually became too much for the members, who would give up and close the club down until Mornington got its own water supply in 1921. Such was the success of the club reopening that Frankston immediately decided to open their

With the latest designs in carpet, timber, bamboo, laminate, luxury vinyl, and rugs, we have the perfect flooring solution for every home and budget. Visit one of our showrooms and let us help you find the floor you’ve been searching for.