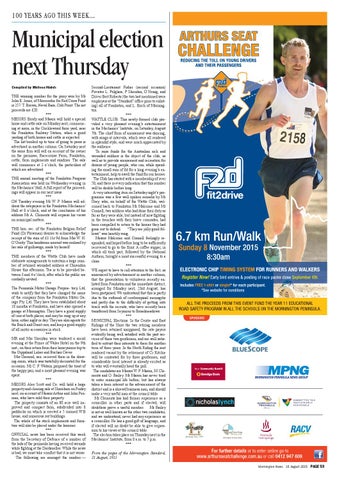 Municipal election next Thursday Compiled by Melissa Walsh THE winning number for the pony won by Mr John E. Jones, of Moorooduc for Red Cross Fund is 257. T. Brown, Naval Base, Crib Point. The net proceeds are £20. *** MESSRS Brody and Mason will hold a special horse and cattle sale on Monday next, commencing at noon, in the Cricklewood farm yard, near the Frankston Railway Station, when a good yarding of both horses and cattle is expected. The list booked up to time of going to press is advertised in another column. On Saturday next the same firm will sell on account of the owner on the premises, Racecourse Farm, Frankston, cattle, farm implements and sundries. The sale will commence at 2 o’clock, the particulars of which are advertised *** THE annual meeting of the Frankston Progress Association was held on Wednesday evening in the Mechanics’ Hall. A full report of the proceedings will appear in our next issue. *** ON Tuesday evening Mr W. P. Mason will address the ratepayers in the Frankston Mechanics’ Hall at 8 o’clock, and at the conclusion of his address Mr A. Clements will express his views on municipal matters. *** THE hon. sec. of the Frankston Belgian Relief Fund (Dr Plowman) desires to acknowledge the receipt of the sum of £3 11s 9d from Mrs W. H. O’Gredy. This handsome amount was realised by her sale of golliwogs, made by herself. *** THE members of the Wattle Club have made elaborate arrangements to entertain a large number of returned wounded soldiers at Clarendon House this afternoon. Tea is to be provided between 3 and 4 o’clock, after which the public are cordially invited. *** The Peninsula Motor Garage Proprie- tory, Ltd, wish to notify that they have changed the name of the company from the Frankston Motor Garage Pty. Ltd. They have been established about 18 months at Frankston, and have also opened a garage at Mornington. They have a good supply of cars at both places, and may be rung up at any hour, either night or day. They are also agents for the Buick and Grant cars, and keep a good supply of all motor accessories in stock. *** MR and Mrs Sheridan were tendered a social evening at the Prince of Wales Hotel on the 9th inst., on their return from their honeymoon trip to the Gippsland Lakes and Buchan Caves. Mrs Garrood, sen. received them in the drawing-room, which was tastefully decorated for the occasion. Mr C. P. Watson proposed the toast of the happy pair, and a most pleasant evening was spent. *** MESSRS Alex Scott and Co. will hold a large property and clearing sale at Shoreham on Friday next, on account of Messrs Arthur and John Penman, who have sold their property. The property consists of an 80 acre well improved and compact farm, subdivided into 8 paddocks on which is erected a 5 roomed W.B house, and numerous out buildings. The whole of the stock implements and furniture will also be placed under the hammer. *** OFFICIAL news has been received this week from the Secretary of Defence of a number of the lads of the peninsula having received wounds while fighting at the Dardanelles. While the news is bad, we must take comfort that it is not worse. The following are amongst the number:—

Second-Lieutenant Fisher (second occasion) Privates L. Polglase, P Sheridan, O.Young, and Driver Bert Roberts (the two last mentioned were employers at the “Standard” office prior to enlisting) all of Frankston, and L. Birch of Mornington. *** WATTLE CLUB. This newly formed club provided a very pleasant evening’s entertainment in the Mechanics’ Institute, on Saturday, August 7th. The chief form of amusement was dancing, with songs at intervals, which were all rendered in splendid style, and were much appreciated by the audience. To raise funds for the Australian sick and wounded soldiers is the object of the club, as well as to provide amusement and recreation for dozens of young people, who can, while spending the small sum of 6d for a long evening’s entertainment, help to swell the fund for our heroes. The Club has started with a membership of over 50, and there is every indication that this number will be double before long. A very interesting item on Saturday night’s programme was a few well spoken remarks by Mr Gray, who, on behalf of the Wattle Club, welcomed back to Frankston Mr Malcome and Mr Connell, two soldiers who had done their duty as far as they were able, but instead of now fighting in the trenches with their brave comrades, had been compelled to return to the homes they had gone out to defend. “They are jolly good fellows” was heartily sung. Messrs Malcome and Connell feelingly responded, and hoped before long to be sufficiently recovered to go to the front. A coffee supper, in which all took part, followed by the National Anthem, brought a most successful evening to a close. *** WE regret to have to call attention to the fact, as announced by advertisement in another column, that the presentation to volunteers recently enlisted from Frankston and the immediate district, arranged for Monday next, 23rd August, has been postponed. We understand that this is partly due to the outbreak of cerebrospinal meningitis and partly due to the difficulty of getting into touch with the recruits, who have recently been transferred from Seymour to Broadmeadows. *** MUNICIPAL Elections. In the Centre and East Ridings of the Shire the two retiring members have been returned unopposed, the rate payers evidently being well satisfied with the past services of these two gentlemen, and are well satisfied to entrust their interests to them for another term of three years. In the North Riding the seat rendered vacant by the retirement of Cr Ritchie will be contested for by three gentlemen, and considerable local interest is already excited as to who will eventually head the poll. The candidates are Messrs W. P. Mason, M. Clements and O. Bailey. Mr Mason has never tried to enter municipal life before, but has always taken a keen interest in the advancement of the district and is a shrewd business man, and should make a very useful man at the council table. Mr Clements has had former experience as a councillor in other parts and if elected, will doubtless prove a useful member. Mr Bailey is not as well known as the other two candidates, and we understand, never had any experience as a councillor. He has a good gift of language, and if elected will no doubt be able to give expression to his views at the council table. The election takes place on Thursday next in the Mechanics’ Institute, from 8 a.m. to 7 p.m. *** From the pages of the Mornington Standard, 21 August, 1915 Mornington News 18 August 2015