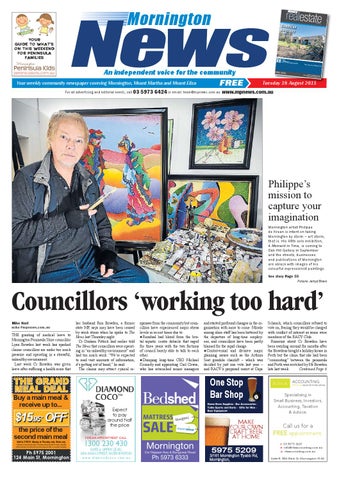 Your guide to whatâ&#x20AC;&#x2122;s on this weekend for peninsula families %HQQHWWV

Philippeâ&#x20AC;&#x2122;s mission to capture your imagination Mornington artist Philippe de Kraan is intent on taking Mornington by storm â&#x20AC;&#x201C; art storm, that is. His 48th solo exhibition, A Moment in Time, is coming to Oak Hill Gallery in September and the streets, businesses and publications of Mornington are ablaze with images of his colourful expressionist paintings. See story Page 55 Picture: Jarryd Bravo

Councillors â&#x20AC;&#x2DC;working too hardâ&#x20AC;&#x2122; Mike Hast mike@mpnews.com.au THE granting of medical leave to Mornington Peninsula Shire councillor Lynn Bowden last week has sparked claims councillors are under too much pressure and operating in a stressful, unhealthy environment. Last week Cr Bowden was given leave after suffering a health scare that

her husband Ron Bowden, a former state MP, says may have been caused by work stress when he spoke to The News last Thursday night. Cr Graham Pittock had earlier told The News that councillors were operating in â&#x20AC;&#x153;an unhealthy environmentâ&#x20AC;? and had too much work. â&#x20AC;&#x153;Weâ&#x20AC;&#x2122;re expected to read vast amounts of information; itâ&#x20AC;&#x2122;s getting out of hand,â&#x20AC;? he said. The claims may attract cynical re-

sponses from the community but councillors have experienced major stress levels in recent times due to: ď Ž Residual bad blood from the brutal aquatic centre debacle that raged for three years with the two factions of council barely able to talk to each other. ď Ž Dumping long-time CEO Michael Kennedy and appointing Carl Cowie, who has retrenched senior managers

and started profound changes in the organisation with more to come. Morale among shire staff has been battered by the departure of long-time employees, and councillors have been partly blamed for the rapid change. ď Ž Controversial and divisive major planning issues such as the Arthurs Seat gondola chairlift â&#x20AC;&#x201C; which was decided by just one vote last year â&#x20AC;&#x201C; and RACVâ&#x20AC;&#x2122;s proposed resort at Cape

Expect to pay around half the price

FOR AN APPOINTMENT CALL

Schanck, which councillors refused to vote on, fearing they would be charged with conflict of interest as some were members of the RACV Club. Rumours about Cr Bowden have been swirling around for months after the Bowdens bought a holiday house in Perth but the claim that she had been â&#x20AC;&#x153;commutingâ&#x20AC;? between the peninsula and Perth was scotched by Mr Bowden late last week. Continued Page 6