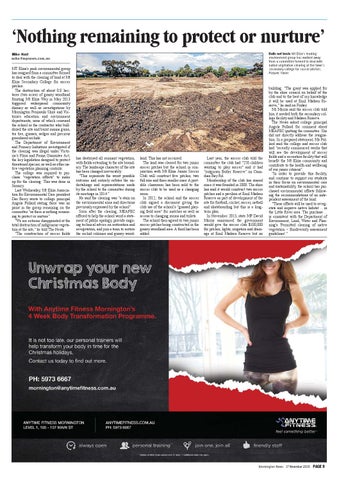 ‘Nothing remaining to protect or nurture’ Mike Hast mike@mpnews.com.au MT Eliza&#39;s peak environmental group has resigned from a committee formed to deal with the clearing of land at Mt Eliza Secondary College for soccer pitches. The destruction of about 0.8 hectares (two acres) of grassy woodland fronting Mt Eliza Way in May 2013 triggered widespread community dismay as well as investigations by Mornington Peninsula Shire and Victoria&#39;s education and environment departments, none of which censured the school or the contractor who bulldozed the site and burnt manna gums, tea tree, grasses, sedges and precious greenhood orchids. The Department of Environment and Primary Industries investigated if the clearing was illegal under Victoria’s Flora and Fauna Guarantee Act, the key legislation designed to protect threatened species, as well as other native vegetation planning controls. The college was required to purchase &quot;vegetation offsets&quot; to make up for the clearing. This was done in January. Last Wednesday, Mt Eliza Association for Environmental Care president Des Berry wrote to college principal Angela Pollard stating there was no point in the group remaining on the committee &quot;as there is nothing remaining to protect or nurture&quot;. &quot;We are extreme disappointed at the total destruction of indigenous vegetation at the site,&quot; he told The News. &quot;The construction of soccer fields

Balls not bush: Mt Eliza’s leading environment group has walked away from a committee formed to deal with native vegetation clearing at the town’s secondary college for soccer pitches. Picture: Yanni

has destroyed all remnant vegetation, with fields extending to the site boundary. The landscape character of the site has been changed irrevocably. &quot;This represents the worst possible outcome and entirely refutes the undertakings and representations made by the school to the committee during its meetings in 2014.&quot; He said the clearing was &quot;a stain on the environmental aims and directions previously expressed by the school&quot;. Soon after the clearing, MEAFEC offered to help the school word a statement of public apology, provide ongoing technical advice on restoration and revegetation, and join a team to restore the orchid colonies and grassy wood-

land. This has not occurred. The land was cleared for two junior soccer pitches but the school in conjunction with Mt Eliza Junior Soccer Club will construct five pitches, two full size and three smaller ones. A portable classroom has been sold to the soccer club to be used as a changing room. In 2012, the school and the soccer club signed a document giving the club use of the school’s &quot;grassed playing field area&quot; for matches as well as access to changing rooms and toilets. The school then agreed to two junior soccer pitches being constructed in the grassy woodland area. A third has been added.

Last year, the soccer club told the committee the club had &quot;250 children wanting to play soccer&quot; and it had &quot;outgrown Butler Reserve&quot; on Canadian Bay Rd. Membership of the club has soared since it was founded in 2008. The shire has said it would construct two soccer pitches and a pavilion at Emil Madsen Reserve as part of development of the site for football, cricket, soccer, netball and skateboarding but this is a longterm plan. In November 2013, state MP David Morris announced the government would give the soccer club $100,000 for pitches, lights, irrigation and drainage at Emil Madsen Reserve but no

building. &quot;The grant was applied for by the shire council on behalf of the club and to the best of my knowledge it will be used at Emil Madsen Reserve,&quot; he said on Friday. Mr Morris said the soccer club told him it needed both the secondary college facility and Madsen Reserve. The News asked college principal Angela Pollard for comment about MEAFEC quitting the committee. She did not directly address the resignation. In a prepared statement, Ms Pollard said the college and soccer club had &quot;recently commenced works that will see the development of soccer fields and a recreation facility that will benefit the Mt Eliza community and contribute to the health and wellbeing of our junior citizens&quot;. &quot;In order to provide this facility, and continue to support our students in their focus on environmental care and sustainability, the school has purchased environmental offsets following the recommendations of an independent assessment of the land. &quot;These offsets will be used to revegetate and improve native habitat ... in the Little River area. The purchase ... is consistent with the Department of Environment, Land, Water and Planning&#39;s &#39;Permitted clearing of native vegetation – Biodiversity assessment guidelines&#39;.&quot;