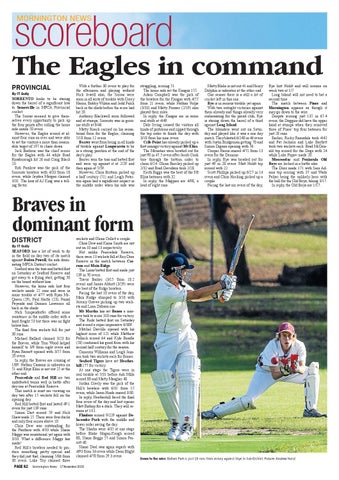 The Eagles in command PROVINCIAL By IT Gully SORRENTO looks to be staring down the barrel of a significant loss to Somerville in MPCA Provincial cricket. The Sorras seemed to give themselves every opportunity to pick up the four points after rolling the home side inside 50 overs. However, the Eagles scored at almost four runs an over and were able to set the visitors a more than reasonable target of 197 to chase down. Jack Barbour was the chief scorer for the Eagles with 44 while Brad Rossborough hit 26 and Craig Black 23. Rob Parslow was the pick of the Sorrento bowlers with 4/33 from 18 overs, while Jayden Morgan claimed 3/31. The loss of AJ King was a telling factor.

With a further 30 overs to play for the afternoon and playing without Nick Jewell also, the Sorras were soon in all sorts of trouble with Corey Harris, Bobby Wilson and Jedd Falck back in the sheds before the score had hit 20. Anthony Blackwell soon followed and at stumps, Sorrento was in genuine strife at 6/46. Matty Roach carried on his sensational form for the Eagles, claiming 5/18 from 12 overs. Baxter went from being in all kinds of trouble against Langwarrin to be in a strong position at the end of the day’s play. Baxter won the toss and batted first and were up against it at 2/29 and then again at 5/59. However, Chris Brittain picked up a half century (51) and Leigh Paterson again had a significant impact in the middle order when his side was

struggling, scoring 51. The home side set the Kangas 155. Adam Campbell was the pick of the bowlers for the Kangas with 4/57 from 21 overs, while Nathan Volpe (3/33) and Matty Prosser (2/19) also played their roles. In reply, the Kangas are in some real strife at 4/49. Dale Irving caused the visitors all kinds of problems and ripped through the top order to finish the day with 3/10 from his nine overs. Crib Point has already picked up a first innings victory against Mt Eliza. The Mounties were bowled out for just 90 in 47.5 overs after Jacob Cook tore through the bottom order to claim 6/24. Glenn Barclay picked up 2/32 and Brad Davidson took 2/28. Keith Biggs was the best of the Mt Eliza batsmen with 32. In reply, the Magpies are 4/98, a lead of eight runs.

Matty Blake is not out 41 and Henry Dolphin is unbeaten at the other end. One senses there is a still a lot of cricket left in this one. Rye is in serious trouble yet again. With two outright victories against them already and things already very embarassing for the proud club, Rye is staring down the barrel of a third against Long Island. The Islanders went out on Saturday and played like it was a one day match. They blasted 6/240 in 46 overs with Justin Bridgeman getting 70 and Simon Dignan opening with 76. Cooper Harris snared 4/71 from 13 overs for the Demons. In reply, Rye was bowled out for just 49 in 28 overs. Matt Noldt top scored with 22. Scott Phillips picked up 6/27 in 14 overs and Chris Hocking picked up a couple. Facing the last six overs of the day,

Rye lost Noldt and will resume on week two at 1/7. Long Island will not need to bat a second time. The match between Pines and Mornington appears as though it may go down to the wire. Despite scoring just 135 in 67.4 overs, the Doggies did have the upper hand at stumps when they removed three of Pines’ top four batsmen for just 28 runs. Earlier, Ricky Ramsdale took 4/42 and Pat Jackson and Luke Bartlett took two wickets each. Brad McDonald top scored for the Dogs with 24 while Luke Popov made 20. Moorooduc and Peninsula Old Boys are locked in a battle also. The Ducs made 171 with Sam Adams top scoring with 37 and Wade Pelzer being the unlikely hero with the ball for the Old Boys, taking 3/17. In reply, the Old Boys are 1/17.

By IT Gully SEAFORD has a lot of work to do in the field on day two of its match against Baden Powell, the side dominating MPCA District cricket. Seaford won the toss and batted first on Saturday at Seaford Reserve and got away to a flying start, getting 50 on the board without loss. However, the home side lost four wickets inside 22 runs and were in some trouble at 4/77 with Ryan McQueen (29), Paul Hartle (23), Faisal Payenda and Damien Lawrence all back in the sheds. Nick Simpendorfer offered some resistance in the middle order with a hard fought 53 but there was no fight below him. The final four wickets fell for just 30 runs. Michael Ballard claimed 3/23 for the Braves, while Tom Wood helped himself to 3/9 from eight overs and Ryan Barnett opened with 3/57 from 20 overs. In reply, the Braves are cruising at 1/89. Nathan Cassano is unbeaten on 51 and Rhys Elmi is not out 25 at the other end. Pearcedale and Red Hill are two undefeated teams well in battle after day one at Pearcedale Reserve. This match is must see viewing on day two after 15 wickets fell on the opening day. Red Hill batted first and lasted 49.1 overs for just 139 runs. Simon Dart scored 59 and Nick Shaw made 25. There were four ducks and only four scores above 10. Chris Dew was outstanding for the Panthers with 4/33 while Shane Maggs was sensational yet again with 3/33. What a difference Maggs has made! Red Hill’s bowlers needed to produce something pretty special and they did just that, claiming 5/86 from 30 overs. Luke Toy claimed three

wickets and Glenn Collett a couple. Chris Dew and Kaine Smith are not out on 33 and 13 respectively. Not unlike Pearcedale Reserve, there were 13 wickets fall at Roy Dore Reserve in the match between Carrum and Main Ridge. The Lions batted first and made just 139 in 70 overs. Travis Barker (3/15 from 18.2 overs) and James Abbott (3/29) were the best of the Ridge bowlers. Facing the last 10 overs of the day, Main Rudge slumped to 3/16 with Jeremy Graves picking up two wickets and Liam Dobson one. Mt Martha has set Boneo a massive task to score 310 runs for victory. The Reds batted first on Saturday and scored a super impressive 6/309. Mitchel Darville opened with his highest score of 121 while Matthew Pollock scored 64 and Kyle Bendle (58) continued his good form with his second half century for the season. Cameron Williams and Leigh Janssen took two wickets each for Boneo. Seaford Tigers have set Heatherhill 177 for victory. At one stage the Tigers were in real trouble at 5/31 before Ash Mills scored 80 and Matty Meagher 48. Jordan Creely was the pick of the Hill’s bowlers with 6/31 from 15 overs, while Jason Hinde snared 3/30. In reply, Heatherhill faced the final four overs of the day and lost opener Matt Bishop for a duck. They will resume at 1/11. Flinders scored 9/229 against Delacombe Park with the middle and lower order saving the day. The Sharks were 4/35 at one stage before Blake Hogan-Keogh scored 80, Shane Beggs 57 and Simon Parrott 40. Shane Deal was again superb with 4/93 from 34 overs while Dean Blight claimed 4/70 from 29.3 overs.

Down to the wire: Ballam Park is just 19 runs from victory against Skye in Sub-District. Picture: Andrew Hurst