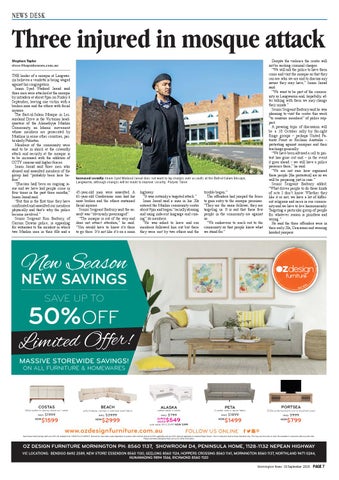 Three injured in mosque attack Stephen Taylor steve@baysidenews.com.au THE leader of a mosque at Langwarrin believes a vendetta is being waged against his congregation. Imam Syed Wadood Janud said three men were attacked at the mosque by intruders at about 9pm on Friday 4 September, leaving one victim with a broken nose and the others with facial injuries. The Bait-ul-Salam Mosque in Leisureland Drive is the Victorian headquarters of the Ahmadiyya Muslim Community, an Islamic movement whose members are persecuted by Muslims in some other countries, particularly Pakistan. Members of the community were said to be in shock at the cowardly attack and security at the mosque is to be increased with the addition of CCTV caneras and higher fences. Imam Janud said three men who abused and assaulted members of the group had â&amp;#x20AC;&amp;#x153;probably been here beforeâ&amp;#x20AC;?. â&amp;#x20AC;&amp;#x153;[Racism has] been an ongoing issue and we have had people come in four times in the past three months,â&amp;#x20AC;? Imam Janud said. â&amp;#x20AC;&amp;#x153;But this is the first time they have confronted and assaulted our members physically and thatâ&amp;#x20AC;&amp;#x2122;s why the police became involved.â&amp;#x20AC;? Senior Sergeant Ron Barbury, of Carrum Downs police, is appealing for witnesses to the incident in which two Muslim men in their 60s and a

Increased security: Imam Syed Wadood Janud does not want to lay charges over assaults at the Bait-ul-Salam Mosque, Langwarrin, although changes will be made to improve security. Picture: Yanni

NEW SAVINGS SAVE UP TO