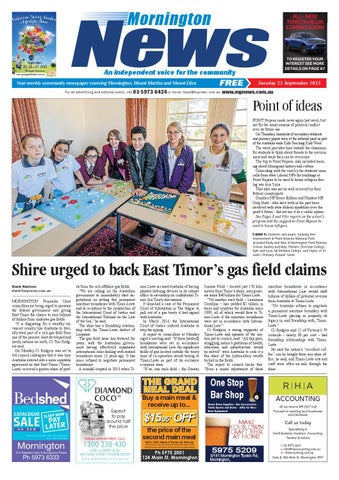 TO REGISTER YOUR INTEREST SEE MORE DETAILS ON PAGE $%

Point of ideas POINT Nepean made news again last week, but not for the usual reasons of political conflict over its future use. On Thursday, hundreds of secondary students and primary pupils were at the national park as part of the Australia wide Kids Teaching Kids Week. The week provides time outside the classroom for students to think about threats to the environment and ways they can be overcome. The trip to Point Nepean also included learning about Aboriginal history and culture. Coinciding with the visit by the students came calls from state Liberal MPs for buildings at Point Nepean to be used to house refugees fleeing war torn Syria. That idea was not so well received by their federal counterparts. Dunkley MP Bruce Billson and Flinders MP Greg Hunt - who have both in the past been involved with state-federal squabbles over the pointâ&amp;#x20AC;&amp;#x2122;s future - did not see it as a viable option. See Pages 8 and 9 for reports on the schoolâ&amp;#x20AC;&amp;#x2122;s program and the suggestion Point Nepean be used to house refugees. Exhibit A: Students and pupils studying ther environment at Point Nepean National Park included Emily and Mia, of Mornington Park Primary School, Audrey and Alex, Flinders Christian College, Kyle and Sara, McClelland College, and Taylor, of St Judeâ&amp;#x20AC;&amp;#x2122;s Primary. Picture: Yanni

Shire urged to back East Timorâ&amp;#x20AC;&amp;#x2122;s gas field claims David Harrison david@mpnews.com.au MORNINGTON Peninsula Shire councillors are being urged to pressure the federal government into giving East Timor the chance to earn billions of dollars from undersea gas fields. â&amp;#x20AC;&amp;#x153;It is disgusting for a wealthy advanced country like Australia to literally steal part of a rich gas field from one of the poorest, least developed and needy nations on earth, Cr Tim Rodgers said. On Monday Cr Rodgers was set to tell council colleagues that it was time Australia entered into a more equitable agreement so that East Timor (TimorLeste) received a greater share of prof-

its from the rich offshore gas fields. â&amp;#x20AC;&amp;#x153;We are calling on the Australian government to immediately start negotiations on setting fair permanent maritime boundaries with Timor-Leste and to re-submit to the jurisdiction of the International Court of Justice and the International Tribunal on the Law of the Sea,â&amp;#x20AC;? he said. The shire has a friendship relationship with the Timor-Leste district of Lospalos. The gas field issue has festered for years, with the Australian government having effectively repudiated international rules dealing with seabed boundaries some 13 years ago. It has since refused to negotiate permanent boundaries. A scandal erupted in 2013 when Ti-

mor-Leste accused Australia of having planted listening devices in its cabinet office to eavesdrop on confidential Timor Sea Treaty discussions. It launched a case at the Permanent Court of Arbitration in The Hague to pull out of a gas treaty it had signed with Australia. In March 2014, the International Court of Justice ordered Australia to stop the spying. A report to councillors at Monday nightâ&amp;#x20AC;&amp;#x2122;s meeting said: â&amp;#x20AC;&amp;#x153;If these [seabed] boundaries were set in accordance with International Law, the significant fields of gas located outside the treaty zone of co-operation would belong to Timor-Leste as part of its exclusive economic zone. â&amp;#x20AC;&amp;#x153;If so, one such field â&amp;#x20AC;&amp;#x201C; the Greater

Expect to pay around half the price FOR AN APPOINTMENT CALL