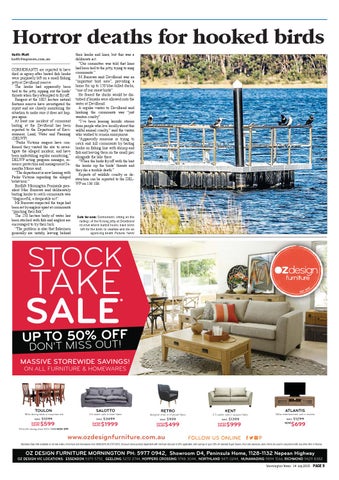 Horror deaths for hooked birds Keith Platt keith@mpnews.com.au CORMORANTS are reported to have died in agony after baited fish hooks were purposely left on a small fishing jetty at Devilbend reserve. The hooks had apparently been tied to the jetty, ripping out the birdsâ&amp;#x20AC;&amp;#x2122; throats when they attempted to fly off. Rangers at the 1005 hectare natural features reserve have investigated the report and are closely monitoring the situation to make sure it does not happen again. At least one incident of cormorant baiting at the Devilbend has been reported to the Department of Environment, Land, Water and Planning (DELWP). â&amp;#x20AC;&amp;#x153;Parks Victoria rangers have confirmed they visited the site to investigate the alleged incident, and have been undertaking regular monitoring,â&amp;#x20AC;? DELWP acting program manager, resource protection and management Samantha Moore said. â&amp;#x20AC;&amp;#x153;The department is now liaising with Parks Victoria regarding the alleged behaviour.â&amp;#x20AC;? Birdlife Mornington Peninsula president Max Burrows said deliberately baiting hooks to catch cormorants was â&amp;#x20AC;&amp;#x153;disgraceful, a despicable actâ&amp;#x20AC;?. Mr Burrows suspected the traps had been set by anglers upset at cormorants â&amp;#x20AC;&amp;#x153;pinching their fishâ&amp;#x20AC;?. The 250 hectare body of water has been stocked with fish and anglers are encouraged to try their luck. â&amp;#x20AC;&amp;#x153;The problem is also that fishermen generally are untidy, leaving behind

Safe for now: Cormoirants sitting on the railings of the fishing jetty at Devilbend reserve where baited hooks have been left for the birds to swallow and die an agonising death. Picture: Yanni