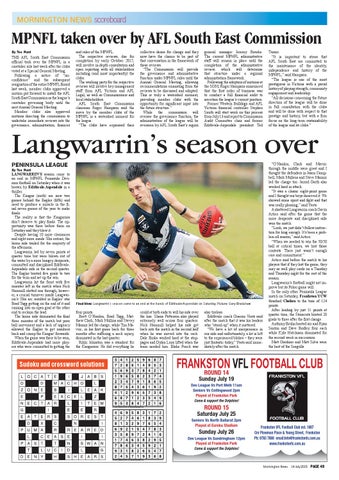 and rules of the MPNFL. The respective reviews, due for completion by early October 2015, will involve in-depth consultation and open reporting with all stakeholders including (and most importantly) the clubs. The working party for the respective reviews will involve key management staff from AFL Victoria and AFL Legal, as well as Commissioners and local stakeholders. AFL South East Commission chairman Roger Hampson said the move by the member clubs of the MPNFL is a watershed moment for the league. “The clubs have expressed their

collective desire for change and they now have the chance to be part of that conversation in the framework of these reviews. “The Commission will provide the governance and administrative function under MPNFL rules until the Annual General Meeting, allowing recommendations emanating from the reviews to be discussed and adopted. This is truly a watershed moment, providing member clubs with the opportunity for significant input into the future structure.” While the commission will oversee the governance function, the administration of the league will be overseen by AFL South East’s region

general manager Jeremy Bourke. The current MPNFL administrative staff will remain in place until the completion of the administrative review, which will determine that structure under a regional administration framework. Following the adoption of motions at the SGM, Roger Hampson announced that the first order of business was to conduct a full financial audit to ascertain the league’s current position. Former Western Bulldogs and AFL Victoria financial controller Stephen Smith will start work on this process from July 13 and report to Commission Audit Committee chair and former Edithvale-Aspendale president Ted

Turner. “It is important to stress that AFL South East are committed to the maintenance of the identity, independence and history of the MPNFL,” said Hampson. “The league is one of the most prestigious in Victoria with a proud history of playing strength, community engagement and leadership. “All decisions concerning the future direction of the league will be done in full consultation with the clubs and will be done with respect to that prestige and history, but with a firm focus on the long-term sustainability of the league and its clubs.”

By Toe Punt LANGWARRIN’S season came to an end in MPNFL Peninsula Division football on Saturday when it was beaten by Edithvale-Aspendale in a thriller. The Kangas (sixth) are now two games behind the Eagles (fifth) and need to produce a miracle in the final seven games of the year to make finals. The reality is that the Kangaroos don’t deserve to play finals. The opportunity was there before them on Saturday and they blew it. Despite having 10 more clearances and eight more inside 50m entries, the home side trailed for the majority of the afternoon. Langwarrin led by seven points at quarter time but were blown out of the water by a more hungry, desperate, committed and disciplined EdithvaleAspendale side in the second quarter. The Eagles booted five goals to two for the term and set up the win. Langwarrin hit the front with five minutes left in the match when Nick Hammill slotted one through, however, a crucial turnover inside Langwarrin’s 50m arc resulted in Eagles’ star Brad Tagg getting on the end of it and running into an open goal at the other end to reclaim the lead. The home side dominated the final three minutes of the match but poor ball movement and a lack of urgency allowed the Eagles to get numbers back and cramp the Kangas’ forwards. When the game was there to be won, Edithvale-Aspendale had more players who were committed to getting the

Final blow: Langwarrin’s season came to an end at the hands of Edithvale-Aspendale on Saturday. Picture: Gary Bradshaw

four points. Brett O’Hanlon, Brad Tagg, Matthew Clark, Mark Mullins and Stevey Mannix led the charge, while Tim Mavric, in his first game back for three months after suffering a neck injury, dominated in the last quarter. Rikki Johnston was a standout for the Kangaroos. He did everything he

could at both ends to will his side over the line. Shane Patterson also played extremely well across four quarters. Nick Hammill helped his side get back into the match in the second half when he was moved into the ruck. Dale Binks worked hard at the stoppages and Dylan Luxa lifted when the team needed him. Blake Peach was

also tireless. Edithvale coach Graeme Yeats said after the match that it was his leaders who “stood-up” when it mattered. “We have a lot of inexperience in our side and unfortunately, a lot is left to the experienced blokes – they were just fantastic today,” Yeats said immediately after the match.

“O’Hanlon, Clark and Mavric through the middle were great and I thought the defenders in Jason Campbell, Mark Mullens and Steve Mannix led the charge too. Jarrod Garth also worked hard in attack. “It was a classic eight-point game and I thought our boys deserved it. We showed some spirit and fight and that was really pleasing,” said Yeats. A shattered Langwarrin coach Gavin Artico said after the game that the more desperate and disciplined side won the match. “Look, we just didn’t follow instruction for long enough. It’s been a problem all season,” said Artico. “When we needed to win the 50/50 ball at critical times, we lost those contests. There just wasn’t enough care and commitment.” Artico said before the match to his players that if they lost the game, they may as well play cards on a Tuesday and Thursday night for the rest of the season. Langwarrin’s football might not improve but its Poker game will. In the only other Peninsula League match on Saturday, Frankston YCW thrashed Chelsea to the tune of 124 points. After leading by just 11 points at quarter time, the Stonecats booted 20 goals to three after the first change. Anthony Bruhn booted six and Ryan Santon and Dave Bodley four each while Kyle Hutchison dominated for the second week in succession. Matt Gardiner and Matt Silva were the best of the Seagulls.