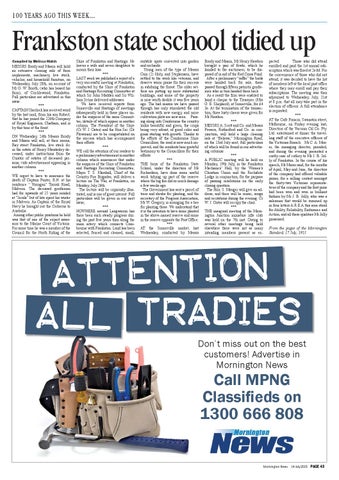 Frankston state school tidied up Compiled by Melissa Walsh MESSRS Brody and Mason will hold an extensive clearing sale of farm implements, machinery, live stock, vehicles, and household furniture, on Wednesday, July 28th, on account of Mr G. W. Booth, (who has leased his farm), of Cricklewood, Frankston. Full particulars are advertised in this issue. *** CAPTAIN Sherlock has received word by the last mail, from his son Robert, that he has joined the 226th Company of Royal Engineers, Chatham, and is by this time at the front. *** ON Wednesday, 24th Messrs Brody and Mason will sell, at their rooms, Bay street Frankston, live stock &amp;c in the estate of Henry Maudesley deceased, under instructions from the Curator of estates of deceased persons, vide advertisement appearing in another column. *** WE regret to have to announce the death of Captain Panter, R.N. at his residence “ Voongan” Toorak Road, Malvern. The deceased gentleman had for upwards of 25 years resided at “Jerula” but of late spent his winter in Malvern. As Captain of the Royal Navy he brought out the Cerberus to Australia. Among other public positions he held was that of one of the expert assessors to the Marine Court of Victoria. For some time he was a member of the Council for the North Riding of the

Shire of Frankston and Hastings. He leaves a wife and seven daughters to mourn their loss. *** LAST week we published a report of a very successful meeting at Frankston, conducted by the Shire of Frankston and Hastings Recruiting Committee at which Sir John Madden and Sir William Irvine delivered addresses. We have received reports from Somerville and Hastings of meetings subsequently held in these places under the auspices of the same Committee, details of which appear in another column. The President of the Shire (Cr W. J. Oates) and the Hon Sec (Dr Plowman) are to be congratulated on the success which has accompanied their efforts. *** WE call the attention of our readers to a preliminary advertisement in another column which announces that under the auspices of the Shire of Frankston and Hastings Recruiting Committee, Major T. S. Marshall, Chief of the Country Fire Brigades, will deliver a lecture on The War, at Frankston, on Monday, July 26th. The lecture will be copiously illustrated, and is one of great interest. Full particulars will be given in our next issue, *** NOWHERE around Langwarrin has there been such steady progress during the past few years than along the main artery which connects Cranbourne with Frankston. Land has been selected, fenced and cleaned, small,

suitable spots converted into garden and orchards. Young men of the type of Messrs Cain (2) Holy, and Stephenson, have settled to the work like veterans, and deserve warm praise for their success in subduing the forest. The older settlers are putting up more substantial buildings, and some of the property is now worth double it was five years ago. The bad season we have passed through has only stimulated the old residents with new energy, and more cultivation plots are now seen. Passing along into Cranbourne the country looks beautiful and green, the crops being very robust, of good color and grass starting with growth. Thanks to the efforts of the Cranbourne Shire Councillors, the road is now much improved, and the residents bear grateful testimony to the Councillors for their efforts. *** THE boys of the Frankston State School, under the direction of Mr Richardson, have done some useful work tidying up part of the reserve where the big fire did so much damage a few weeks ago. The Government has sent a parcel of trees and shrubs for planting, and the secretary of the Progress Association, Mr W. Gregory, is arranging for a bee for planting these. We understand that it is the intention to have some planted in the above-named reserve and some in the reserve opposite the Post Office. *** AT the Somerville market, last Wednesday, conducted by Messrs

Brody and Mason, Mr Henry Hawken brought a pair of fowls, which he handed to the auctioneer, to be disposed of in aid of the Red Cross Fund. After a preliminary “raffle” the birds were handed back for sale, these passed through fifteen patriotic gentlemen who in turn handed them back. As a result the firm were enabled to hand a cheque to the Treasurer (Mrs G. E. Shepherd), at Somerville, for £4 3s. At the termination of the transaction, three lusty cheers were given for Mr Hawken. *** MESSRS A. Scott and Co. and Messrs Powers, Rutherford and Co. in conjunction, will hold a large clearing sale at “Belawa,” Mornington Road, on the 23rd July next, full particulars of which will be found in our advertising columns. *** A PUBLIC meeting will he held on Monday, 19th July, in the Frankston Mechanics’ Hall, by the Women’s Christian Union and the Rechabite Lodge in conjunction, for the purpose of passing resolutions on the early closing question. The Hon. S. Mauger will give an address, and there will be music, songs and recitations during the evening. Cr W. J. Ontes will occupy the chair. *** THE inaugural meeting of the Mornington Junction miniature rifle club was held on the 7th inst. Owing to several other meetings being held elsewhere there were not as many intending members present as ex-

pected. Those who did attend enrolled and paid the 1st annual subscription which was fixed at 2s 6d. For the convenience of those who did not attend, it was decided to have the list of members left at the local post office where they may enroll and pay their subscriptions. The meeting was then adjourned to Wednesday, July, 21st at 8 p.m. that all may take part in the election of officers. A full attendance is requested. *** AT the Cafe Francis, Swanston street, Melbourne, on Friday evening last, Directors of the Vacuum Oil Co. Pty. Ltd. entertained at dinner the travelling staff of the executive officers of the Victorian Branch. Mr C. A. Moser, the managing director, presided, and during the evening presented a costly case of cutlery to Mr J. B. Jolly of Frankston. In the course of his speech, Mr Moser said, for the months of April, May and June, the directors of the company had offered valuable prizes, for a selling contest amongst the thirty-two Victorian representatives of the company and the first prize had been won and won in brilliant fashion by Mr J. B. Jolly, who was a salesman that would be summed up in four letters A.R.E.A this area stood for Ability, Reliability, Endurance and Action, and all these qualities Mr Jolly possessed. From the pages of the Mornington Standard, 17 July, 1915