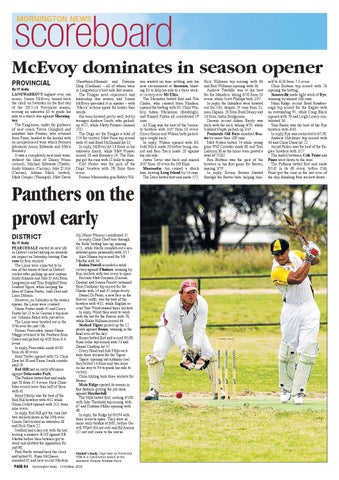 scoreboard McEvoy dominates in season opener PROVINCIAL By IT Gully LANGWARRIN’S highest ever run scorer, Simon McEvoy, turned back the clock on Saturday on the first day of the 2015-16 Provincial season, scoring an unbeaten 83 to guide his side to a shock win against Mornington. The Kangaroos, under the guidance of new coach Travis Campbell and assistant Jake Prosser, who returned from Pines, headed to the kennel with an inexperienced team which featured debutants Aaron Edwards and Mitch Bromley. It was a completely new-look team, without the likes of Danny Weare (retired), Michael Edwards (Tyabb), Andy Johnson (Carrum), Jake D’Atri (Carrum), Adrian Mack (rested), Mark Cooper (Warragul), Matt Davie

(Hawthorn-Monash) and Dwayne Doig (Cardinia) – all of whom were in Langwarrin’s best side last season. The Kangas need experience and leadership this season and Simon McEvoy provided it in spades – with ‘Macca’ actions speak far louder than words. His team bowled pretty well, led by teenager Andrew Smith, who pickedup 4/27, while Matty Prosser claimed 2/32. The Dogs set the Kangas a total of 154 for victory. Matt Foon top scored with 45 and Brad McDonald hit 32. In reply, McEvoy hit 13 fours in his unbeaten knock, while Matt Prosser scored 28 and Bromley 19. The Kangas got the runs with 11 balls to spare. Kurt Nestor was the pick of the Dogs’ bowlers with 2/8 from three overs. Former Moorooduc gun Bobby Wil-

Panthers on the prowl early DISTRICT By IT Gully PEARCEDALE started its new life in District cricket having an immediate impact on Saturday, beating Carrum by four wickets. The Lions were expected to be one of the teams to beat in District cricket after picking up new captain Andy Johnson and Jake D’Atri from Langwarrin and Tom Burgdorf from Seaford Tigers, while keeping the likes of Shaun Foster, Josh Dent and Liam Dobson. However, on Saturday in the season opener, the Lions were crushed. Shaun Foster made 45 and Corey Foster hit 23 to be Carrum’s top scorers. Johnson failed with just seven. The Lions were bowled out in the 37th over for just 136. Former Pearcedale junior Shane Maggs returned to the Panthers from Casey and picked-up 4/20 from 6.4 overs. In reply, Pearcedale made 6/181 from its 40 overs. Brad Trotter opened with 53, Chris Dew hit 30 and Kaine Smith contributed 29. Red Hill had an early afternoon against Delacombe Park. The Parkers batted first and made just 78 from 37.4 overs. Nick Christides scored more than half of them with 41. Brent Martin was the best of the Red Hill bowlers with 4/11 while Glenn Collett opened with 2/21 from nine overs. In reply, Red Hill got the runs just two wickets down in the 19th over. Simon Dart scored an unbeaten 38 and Nick Shaw 22. Seaford had a day out with the bat, scoring a massive 4/219 against Mt Martha before their bowlers got to work and skittled the opposition for just 90. Paul Hartle wound back the clock and belted 91, Ryan McQueen smashed 65 and new recruit Morteza

Ali (Narre Warren) contributed 32. In reply, Chris Cleef tore through the Reds’ batting line-up, snaring 6/21, while Hartle rounded-out a sensational game personally with 2/17. Alex Mason top scored for Mt Martha with 34. Baden Powell recorded a solid victory against Flinders, winning by four wickets with two overs to spare. Recruits Matt Grayson (Carrum Downs) and Simon Parrott (returned from Cardinia) top scored for the Sharks with 54 and 47 respectively. Daniel Di Paolo, a new face in the Braves’ outfit, was the best of the bowlers with 4/32, while English recruit Tom Wood snared three wickets. In reply, Wood then went to work with the bat for the Braves with 78, while Blake Hillman scored 44. Seaford Tigers picked up the 12 points against Boneo, winning in the final over of the day. Boneo batted first and scored 9/168. Ryan Jellie top scored with 53 and Daniel Coathup hit 37. Corey Hand and Ash Mills each took three wickets for the Tigers. Tigers’ opening bat Anthony Joel then belted 14 fours and two sixes on his way to 94 to guide his side to victory. Chris Jobling took three wickets for Boneo. Main Ridge opened its season in fine fashion, getting the job done against Heatherhill. The Hills batted first, making 6/186 with Jake Theobald top scoring with 67 and Kristian Miller opening with 48. In reply, the Ridge hit 6/194 with three overs to spare. They were in some early trouble at 6/81, before Gareth Wyatt (64 not out) and Ed Aarons (55 not out) came to the rescue.

Cricket’s back: Skye take on Frankston YCW in a Sub-District match at the weekend. Picture: Andrew Hurst

son wasted no time settling into his new environment at Sorrento, blasting 83 to help his side to a three wicket victory over Mt Eliza. The Mounties batted first and Tim Clarke, who crossed from Flinders, opened the batting with 83. Chris Wisbey, Adam Michelson (Bentleigh), and Russell Fulton all contributed 19 runs. AJ King was the best of the Sorrento bowlers with 3/47 from 10 overs. Corey Harris and Wilson both pickedup a couple each. In reply, Wilson opened with 83, Jedd Falck made 33 before being runout and Ben Tracy made 20 against his old side. Justin Savio was back and snared 3/37 from 10 overs for Mt Eliza. Moorooduc too caused a shock loss, beating Long Island by 14 runs. The Ducs batted first and made 157,

Nick Williams top scoring with 66 and Ben Williams opening with 36. Andrew Tweddle was at his best for the Islanders, taking 6/20 from 10 overs, while Scott Phillips took 2/37. In reply, the Islanders were bowled out for 143, despite 29 runs from Simon Dignan, 28 from Brad Denny and 24 from Justin Bridgeman. Darwin recruit Adam Bayly was slick with the rock, taking 4/19, while Sushant Gupta picked-up 3/45. Peninsula Old Boys smashed Baxter by more than 100 runs. Matt Hyden belted 74 while young guns Will Crowder made 60 and Tom Labrooy 30 as the home team posted a total of 7/202. Ben Brittain was the pick of the bowlers in his first game for Baxter, snaring 3/59. In reply, Eivion Bowen blasted through the Baxter bats, helping him-

self to 6/26 from 7.3 overs. Chris Brittain top scored with 28 opening the batting. Somerville made light work of Rye, winning by almost 100 runs. Main Ridge recruit Brad Rossborough top scored for the Eagles with an outstanding 91, while Craig Black opened with 59 and Leigh Lowry contributed 36. Tom Baron was the best of the Rye bowlers with 4/43. In reply, Rye was restricted to 6/138. Andrew Hitchener top scored with 43 and Chris Dunn hit 22. Jarryd Parker was the best of the Eagles’ bowlers with 3/27. The match between Crib Point and Pines went down to the wire. The Pythons batted first and made 8/141 in its 40 overs, before Crib Point got the runs in the last over of the day, finishing four wickets down.