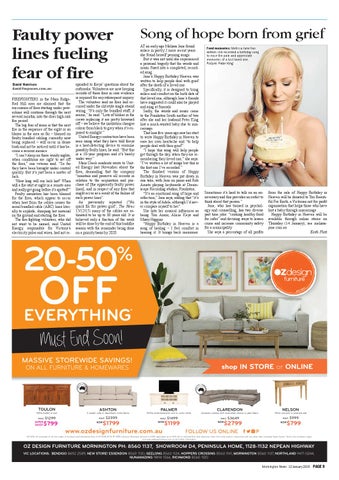 Faulty power lines fueling fear of fire David Harrison david@mpnews.com.au FIREFIGHTERS in the Main RidgeRed Hill area are alarmed that the succession of fires starting under powerlines will continue through the next several months, into the drier high-risk fire period. The big fear of some is that the next fire in the sequence of the eight or so blazes in the area so far – blamed on faulty bundled cabling currently now being replaced – will occur in dense bush and not be noticed until it has become a serious menace. “I can’t sleep on these windy nights, when conditions are right to set off the fires,” one veteran said. “So far they have been brought under control quickly. But it’s just been a matter of luck. “How long will our luck last? When will a fire start at night in a remote area and really get going before it’s spotted?” Faulty insulation has been blamed for the fires, which appear to occur when heat from the cables causes the aerial bundled cable (ABC) lines literally to explode, dumping hot material on the ground and starting the fires. The fire-fighting volunteer, who did not want to be named, said United Energy, responsible for Victoria’s electricity poles and wires, had not re-

sponded to fireys’ questions about the outbreaks. Volunteers are now keeping records of these fires in case evidence is required for any subsequent inquiry. The volunteer said no fires had occurred under the old style single strand wiring. “It’s only the bundled stuff, it seems,” he said. “Lots of blokes in the crews replacing it are pretty browned off – we believe the insulation changes colour from black to grey when it’s exposed to sunlight.” United Energy contractors have been seen using what they have told fireys is a heat-detecting device to examine possibly faulty lines, he said. “But this is a 10-year program and it’s barely under way.” Main Creek residents wrote to United Energy last November about the fires, demanding that the company “maintain and preserve all records in relation to the acquisition and purchase of [the apparently faulty power lines], and in respect of any fires that might occur as a result of the failure of such power lines”. As previously reported (“No quick fix for power grid”, The News 15/12/15) many of the cables are estimated to be up to 30 years old. It is believed only a fraction of the work will be done by the end of this bushfire season with the remainder being done on a priority basis by 2020.

Song of hope born from grief AT an early age Melissa Jane found solace in poetry. I more recent years she found herself penning songs. But it was not until she experienced a personal tragedy that the words and music fused into a completed, recorded song. Jane’s Happy Birthday Heaven was written to help people deal with grief after the death of a loved one. Specifically, it is designed to bring solace and comfort on the birth date of that loved one, although Jane’s friends have suggested it could also be played and sung at funerals. Sadly, the words and music came to the Frankston South mother of two after she and her husband Peter King lost a much-wanted baby due to miscarriage. That loss five years ago saw her start to write Happy Birthday in Heaven to ease her own heartache and “to help people deal with their grief”. “I hope this song will help people get through the day, when they are remembering their loved one,” she says. “I’ve written a lot of songs but this is the first one I’ve recorded.” The finished version of Happy Birthday in Heaven was put down in one take, with Jane on piano and Rob Amato playing keyboards at Dreamscape Recording studios, Frankston. “It’s an emotional song of hope and reflection,” Jane says, adding that “it’s in the style of Adele, although I’d never compare myself to her”. She lists her musical influences as being Tori Amos, Alicia Keys and Missy Higgins. “Happy Birthday in Heaven is a song of healing – I feel comfort in hearing it. It brings back memories.

Fond memories: Melissa Jane has written snd recorded a birthday song to ease the pain and appreciate memories of a lost loved one. Picture: Peter King

Sometimes it’s hard to talk on an anniversary and this provides an outlet to think about that person.” Jane, who has trained in psychology and counselling, has two diverse part time jobs: “cooking healthy food for cafes” and devising ways to lessen crime and increase community safety for a municipality. She says a percentage of all profits

shop IN STORE or ONLINE

www.ozdesignfurniture.com.au 20-50% off storewide on all new orders of furniture and homewares from 5-01-2016 till 18-01-2016 inclusive. Minimum discount of 20% applicable up to 50% off on selected ﬂoor and clearance stock. Not to be used in conjunction with any other offer including Super Savers. Terms and conditions apply visit www.ozdesignfurniture.com.au for further information