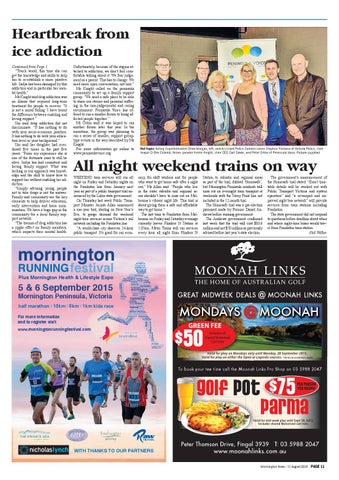 Heartbreak from ice addiction Continued from Page 1 “Touch wood, this time she can get the knowledge and skills to help her to re-establish a more positive life. Indya has been damaged by this addiction and in particular her mental health.” Ms Knight said drug addiction was an illness that required long-term treatment for people to recover. “It is not a moral failing. I have learnt the difference between enabling and loving support.” She said drug addiction did not discriminate. “It has nothing to do with your socio-economic position. It has nothing to do with your education level or your background.” She said her daughter had overdosed five times in the past five years. “From my experience she is one of the fortunate ones to still be alive. Indya has had consistent and loving family support. What was lacking in our approach was knowledge and the skill to know how to support her without enabling her addiction. “Simply advising young people not to take drugs is not the answer. Family and community are the key elements to help deliver education, early intervention and harm minimisation. We have a huge gap in the community for a local family support network. “The trauma of drug addiction has a ripple effect on family members, which impacts their mental health.

Unfortunately, because of the stigma attached to addiction, we don’t feel comfortable talking about it. We fear judgement as a parent. This has to change. We need more open conversation, not less.” Ms Knight called on the peninsula community to set up a family support group. “We need a safe place to be able to share our stories and personal suffering in the non-judgemental and caring environment. Peninsula Voice has offered to run a smaller forum to bring affected people together.” Mr Orton said it was hoped to run another forum later this year. In the meantime, the group was planning to run a series of smaller, support grouptype events in the way described by Ms Knight. For more information go online to www.peninsulavoice.org

All night weekend trains on way WEEKEND train services will run all night on Friday and Saturday nights on the Frankston line from January next year as part of a public transport trial announced by the Labor state government. On Thursday last week Public Transport Minister Jacinta Allan announced a one-year trial, starting on New Year’s Eve, to gauge demand for weekend night-time services across Victoria’s rail network including the Frankston line. “A world-class city deserves 24-hour public transport. It’s good for our econ-

omy, for shift workers and for people who want to get home safe after a night out,” Ms Allan said. “People who live in the outer suburbs and regional areas shouldn’t have to miss out on Melbourne’s vibrant night life. This trial is about giving them a safe and affordable way to get home.” The last train to Frankston from Melbourne on Friday and Saturday evenings currently leaves Flinders St Station at 1.05am. Metro Trains will run services every hour all night from Flinders St

Station to suburbs and regional areas as part of the trial, dubbed ‘Homesafe’, but Mornington Peninsula residents will miss out on overnight train transport at weekends with the Stony Point line not included in the 12-month trial. The Homesafe trial was a pre-election promised made by Premier Daniel Andrews before winning government. The Andrews government confirmed last week that the trial will cost $83.6 million and not $50 million as previously advised before last year’s state election.

The government’s announcement of the Homesafe trial stated: “Exact timetable details will be worked out with Public Transport Victoria and system operators” and “a revamped and improved night bus network” will provide services from train stations including Frankston. The state government did not respond to questions before deadline about when and where night-time buses would travel from Frankston train station. Neil Walker

5 & 6 September 2015 Mornington Peninsula, Victoria half marathon I 10km I 5km I 1km kids race For more information and to register visit www.morningtonrunningfestival.com

WITH THANKS TO OUR PARTNERS Mornington News 11 August 2015