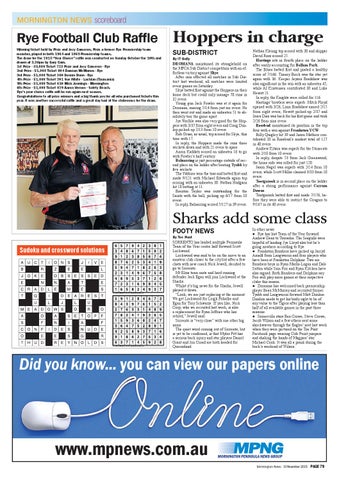 Hoppers in charge SUB-DISTRICT By IT Gully DROMANA maintained its stranglehold on the MPCA Sub District competition with an effortless victory against Skye. After rain effected all matches in Sub District last weekend, all matches were limited overs games on Saturday. Skye batted first against the Hoppers on their home deck but could only manage 78 runs in 32 overs. Young gun Jack Fowler was at it again for Dromana, snaring 5/14 from just six overs. He then went out and made an unbeaten 51 to absolutely tear the game apart. Jye Voelkle was also very good for the Hoppers with 3/35 from eight overs and Craig Dunlop picked-up 2/13 from 10 overs. Rob Gruar, as usual, top scored for Skye, this time with 17. In reply, the Hoppers made the runs three wickets down and with 21 overs to spare. Aaron Kaddatz scored an unbeaten 16 to go with Fowler’s half century. Balnarring is just percentage outside of second place on the ladder after beating Tyabb by five wickets. The Yabbies won the toss and batted first and made 9/121 with Michael Edwards again top scoring with an unbeaten 38. Nathan Hudgson hit 18 batting at 11. Brenton Taylor was outstanding for the Saints with the ball, picking up 6/17 from 10 overs. In reply, Balnarring scored 5/127 in 39 overs.

Nathan Kleinig top scored with 38 and skipper David Ross scored 25. Hastings sits in fourth place on the ladder after easily accounting for Ballam Park. The Blues batted first and posted a healthy score of 7/166. Timmy Birch was the star yet again with 36. Keeper Jaysen Bradshaw was also significant in the win with an unbeaten 45, while Al Kristensen contributed 30 and Luke Hewitt 21. In reply, the Knights were rolled for 116. Hastings’ bowlers were superb. Mitch Floyd opened with 3/26, Liam Bradshaw snared 2/15 from eight overs, Hewitt picked-up 2/37 and Isuru Dias was back for his first game and took 2/26 from nine overs. Rosebud maintained its position in the top four with a win against Frankston YCW. Billy Quigley hit 39 and Jason Mathers contributed 20 in Rosebud’s modest total of 127 in 40 overs. Andrew Kitson was superb for the Stonecats with 2/10 from 10 overs. In reply, despite 53 from Jack Greenwood, the home side was rolled for just 120. Jason Nagel was superb with 2/14 from 10 overs, while Scott Millar claimed 3/33 from 10 overs. Tootgarook is in second place on the ladder after a strong performance against Carrum Downs. Tootgarook batted first and made 7/176, before they were able to restrict the Cougars to 9/167 in its 40 overs.

By Toe Punt SORRENTO has landed multiple Peninsula Team of the Year centre half forward Scott Lockwood. Lockwood was said to be on the move to an amateur club closer to the city but after a few chats with new coach Nick Jewell, decided to go to Sorrento. Mt Eliza team mate and hard running defender Jack Egan will join Lockwood at the Sharks. Whilst it’s big news for the Sharks, Jewell played it down. “Look, we are just replacing at the moment. We get Lockwood for Leigh Poholke and Egan for Troy Schwarze. If you like, Nick Corp, who we recruited last week, is also a replacement for Ryan Jeffries who has retired,” Jewell said. Sorrento is “very close” with one other big name. The quiet word coming out of Sorrento, but is yet to be confirmed, is that Myles Pitt has a serious back injury and star players Daniel Grant and Jon Croad are both headed for Queensland.

In other news: has lost Team of the Year forward Andrew Dean to Tooradin. The Seagulls were hopeful of landing Jye Lloyd also but he’s going nowhere according to Rye. Frankston Bombers have picked up Jarryd Amalfi from Langwarrin and four players who have been at Frankston Dolphins. Two are Bombers boys in Ryan Marks-Logan and Dale Sutton while Sam Fox and Ryan Kitchen have also signed. Both Bombers and Dolphins say Fox will play more games at their respective clubs this season. Dromana has welcomed back premiership player Beau McMurray and recruited former Tyabb and Langwarrin forward Matt Dimkos. Dimkos needs to get his body right to be of any value to the Tigers after playing less than half of all available games in the past three seasons. Somerville stars Ben Crowe, Steve Crowe, Jacob Wilson and a few others sent some shockwaves through the Eagles’ nest last week when they were pictured on the Toe Punt Facebook page wearing Crib Point jumpers and shaking the hands of Magpies’ star Michael Cook. It was all a prank during the buck’s weekend of Wilson. Rye