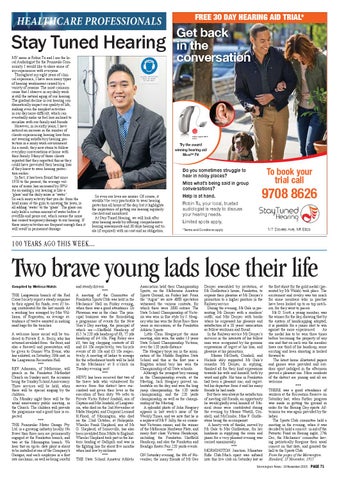 Stay Tuned Hearing MY name is Robin Tu and I am the local Audiologist for the Peninsula Community. I would like to share some of my experiences with everyone. Throughout my eight years of clinical experience, I have seen many types of hearing weaknesses caused by a variety of reasons. The most common cause that I observe in my daily work is still the natural aging of our hearing. The gradual decline in our hearing can dramatically impact our quality of life, making even the simplest activities in our day more difficult, which can eventually make us feel less inclined to socialise with our family and friends. However, in recently years, I have noticed an increase in the number of clients experiencing hearing loss from not wearing satisfactory hearing protection in a noisy work environment. As a result, they now strain to follow everyday conversations at home with their family. Many of those clients reported that they regretted this as they could have prevented their hearing loss if they knew to wear hearing protection earlier. In fact, it has been found that since 1950 to the present, the average volume of music has increased by 39%! As an analogy, our hearing is like a ‘glass’ and the daily noise is ‘water’. So each noisy activity that you do: from the loud music at the gym to mowing the lawn, is all adding ‘water’ to the ‘glass’. The glass can only hold a certain amount of water before it overfills and pours out, which means the noise has caused temporary damage to our hearing. If these noisy activities are frequent enough then it will result in permanent damage.

Get back in the conversation

So even our lives are noisier. Of course, it wouldn’t be very practicable to wear hearing protection all hours of the day, but it highlights the importance of getting our hearing regularly checked and monitored. At Stay Tuned Hearing, we will look after your hearing needs by offering comprehensive hearing assessments and 30 days hearing aid trials (if required) with no cost and no obligation.

Do you sometimes struggle to hear in noisy places? Miss what’s being said in group conversations? Help is at hand. Robin Tu, your local, trusted audiologist is ready to discuss your hearing needs. Limited spots apply.

Two brave young lads lose their life Compiled by Melissa Walsh THE Langwarrin branch of the Red Cross Society report a steady response to their appeal for funds, over £5 being contributed for the last month. At a working bee arranged by Mrs Williams, of Ruperstan, an average attendance of twelve assisted in making sand bags for the trenches. *** A welcome home social will be tendered to Private E. A. Berry, who has returned invalided from the front, and also a farewell and presentation will be given to Gunner Wm Evans, who has enlisted, on Saturday, 20th inst, in the Langwarrin Recreation Hall. *** REV Adamson, of Melbourne, will preach in the Frankston Methodist Church on Sunday next, the occasion being the Sunday School Anniversary. Three services will be held, when there will be special singing by the children. On Monday night there will be the usual anniversary public meeting, in the Church. The children will provide the programme and a good time is expected. *** THE Peninsular Motor Garage Pty. Ltd. is a growing industry locally. No fewer than three men are permanently engaged at the Frankston branch, and two at the Mornington branch. We hear that an up-to- date plant is about to be installed at one of the Company’s Garages, and each employee is a first rate mechanic, as well as being careful

and steady drivers. *** A meeting of the Committee of Frankston Sports Club was held in the Mechanics’ Hall on Friday evening, when there was a good attendance. Dr Plowman was in the chair. The principal business was the formulating a programme of events for the New Year’s Day meeting, the principal of which are:—Sheffield Handicap of £15 5s 220 yds handicap of £8, 75 yds handicap of £4 10s, Flag Relay race £3, two log chopping contests of £8 and £4 10s respectively, two bicycle events of £6 10s and £3 10s respectively. A meeting of ladies to arrange for the refreshment booth will be held in the Mechanics’ at 8 o’clock on Tuesday evening next. *** NEWS has been received that two of the brave lads who volunteered for service from this district have succumbed and given their lives in the execution of their duty. We refer to Private Victor Robert Jondahl, son of Captain and Mrs Jondahl, of Langwarrin, who died on the 2nd November at Malta Hospital, and Corporal Leonard H.Flood, of Mornington, who died on the 22nd October, at Heliopolis. Wheeler Frank Shepherd, son of Mr G. Shepherd, of Somerville, has also been invalided from Malta to England. Wheeler Shepherd took part in the historic landing at Gallipoli and was in the fighting line for about five months when laid low by sickness. *** THE State School Amateur Athletic

Association held their Championship Sports; on the Melbourne Amateur Sports Ground, on Friday last. From the “Argus” we note 4000 spectators witnessed the various contests, for which there were 2000 entries. The State School Championship of Victoria was won in fine style by J. Heagney who has won the Boys Race three years in succession, at the Frankston Athletic Sports. Little Clem Heagney,at the same meeting, also won, the under 13 years State School Championship Victoria, over the 120 yards distance. The Heagney boys ran in the nomination of the Middle Brighton State School and this is the first year a Brighton school boy has won the Championship of all State schools. Although the youngest boy running in the Championship events, at the Meeting, Jack Heagney proved unbeatable on the day, and won the long jump championship, the 120 yards championship, and the 220 yards championship, as well as the championship of the Meeting. A splendid photo of John Heagney appears in last week’s issue of the Weekly Times, and we note that he is a nephew of Mr F. Jolly, the ex-consistant Victorian runner, and the winner of the Melbourne Hardware Plate, and many first class Victoria Handicaps, including the Frankston Sheffield Handicap, and also the Frankston and Bendigo Easter Fair 220 yards events. *** ON Saturday evening, the 6th of November, the many friends of Mr Geo

Denyer assembled by invitation, at Mr Girdleston’s house, Frankston, to express their pleasure at Mr Denyer’s promotion to a higher position in the Railway service. During the evening, Mr Gale in presenting Mr Denyer with a smokers’ outfit, and Mrs Denyer with books where he expressed his pleasure and satisfaction of a 20 years’ association as fellow workman and friend. In the Railway service Mr Denyer’s services in the interests of his fellow man were recognized by his genuine expressions of regret at his loss, and pleasure at his promotion. Messrs McGrath, Croskell, and Nichols ably supported Mr Gale’s remarks. Mr Denyer, in replying, thanked all for their kind expressions towards his wife and himself, both by word and gifts. His time in Frankston had been a pleasant one, and regretted his departure from it and his many friends he had made. But there was always the satisfaction of meeting old friends, an opportunity he would gladly avail himself of. Musical items were contributed during the evening by Messrs Wastill, Croskell, and McCombe, Miss F. Girdlestone being the accompanist. A hearty vote of thanks, moved by Mr Gale to Mrs Girdlestone, for her kindness in supplying the room and piano for a very pleasant evening was carried unanimously. *** MORNINGTON Junction Miniature Rifle Club.Much spirit was infused into this live club on Saturday last as

the first shoot for the gold medal (presented by Mr Walsh) took place. The excitement and rivalry was too much for some members who in practise have been looked up to as top notchers, for they went to pieces. Mr G. Scott, a young member, was the winner for the day, showing that by the system of handicapping adopted, it is possible for a junior shot to win against the more experienced. As the medal has to be won three times before becoming the property of any one and that on each win the member loses one third of his handicap, some exciting and keen shooting is looked forward to. The latest home illustrated papers and games were provided and outdoor sport indulged in the afternoon proved a pleasant one. More residents of the district are joining and all are welcome. *** THERE was a good attendance of workers at the Recreation Reserve on Saturday last, when further progress was made in getting the ground in order for the Boxing Day sports. Afternoon tea was again provided by the ladies. The Sports Club committee held a meeting in the evening, when it was decided to hold a concert in aid of the Patriotic Fund on Boxing night, 27th Dec, the Mechanics’ committee having patriotically foregone their usual concert on that date, and granted the hall to the Sports Club. From the pages of the Mornington Standard, 13 November, 1915