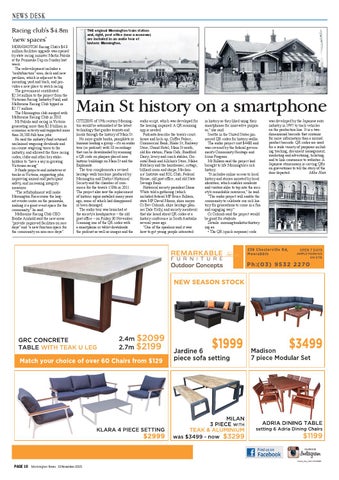 NEWS DESK Racing club's $4.8m 'new spaces' MORNINGTON Racing Club's $4.8 million facilities upgrade was opened by state racing minister Martin Pakula at the Peninsula Cup on Sunday last week. The redevelopment includes a "multifunction" area, deck and new pavilion, which is adjacent to the mounting yard and track, and provides a new place to watch racing. The government contributed $2.34 million to the project from the Victorian Racing Industry Fund, and Melbourne Racing Club tipped in $2.77 million. The Mornington club merged with Melbourne Racing Club in 2010. Mr Pakula said racing in Victoria generating more than $2.8 billion in economic activity and supported more than 26,500 full-time jobs. He said the industry fund returned unclaimed wagering dividends and on-course wagering taxes to the industry, and allowed the three racing codes, clubs and other key stakeholders to "have a say in growing Victorian racing". It funds projects and initiatives at tracks in Victoria, supporting jobs, improving animal and participant safety, and increasing integrity measures. "The refurbishment will make Mornington Racecourse the largest events centre on the peninsula, making it a great event space for the community," he said. Melbourne Racing Club CEO Brodie Arnhold said the new areas "provide improved facilities on race days" and "a new function space for the community on non-race days".

THE original Mornington train station and, right, post office (now a museum) are included in an audio tour of historic Mornington.

Main St history on a smartphone CITIZENS of 19th century Mornington would be astonished at the latest technology that guides tourists and locals through the history of Main St. No more guide books, pamphlets or humans leading a group – it's an audio tour (or podcast) with 18 recordings that can be downloaded by scanning a QR code on plaques placed near historic buildings on Main St and the Esplanade. The tour complements a revised heritage walk brochure produced by Mornington and District Historical Society and the chamber of commerce for the town's 150th in 2011. The project also saw the replacement of historic signs installed many years ago, some of which had disappeared or been damaged. The audio tour was launched at the society's headquarters – the old post office – on Friday 30 November. Scanning one of the QR codes with a smartphone or tablet downloads the podcast as well as images and the

in history as they liked using their smartphones for innovative purposes," she said. Seattle in the United States pioneered QR codes for history walks. The audio project cost $4480 and was covered by the federal government's Community Heritage and Icons Program. Mr Billson said the project had brought to life Mornington's rich history. "It includes online access to local history and stories narrated by local identities, which enables residents and visitors alike to tap into the society's remarkable resources," he said. "The audio project will enable the community to celebrate our rich history for generations to come in a fun and engaging way." Cr Colomb said the project would be good for students. Details: morningtondistricthistory. org.au • The QR (quick response) code

was developed by the Japanese auto industry in 1995 to track vehicles on the production line. It is a twodimensional barcode that contains far more information than a normal product barcode. QR codes are used for a wide variety of purposes including tracking, document management, marketing and advertising, ticketing, and to link consumers to websites. A Japanese stonemason is carving QRs on gravestones to tell the story of the dear departed. Mike Hast