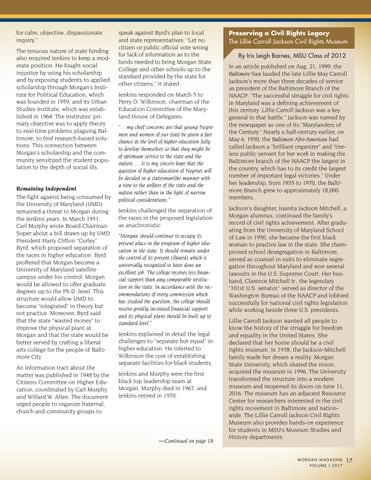 for calm, objective, dispassionate inquiry.” The tenuous nature of state funding also required Jenkins to keep a moderate position. He fought social injustice by using his scholarship and by exposing students to applied scholarship through Morgan’s Institute for Political Education, which was founded in 1959, and its Urban Studies Institute, which was established in 1964. The Institutes’ primary objective was to apply theory to real-time problems plaguing Baltimore, to find research-based solutions. This connection between Morgan’s scholarship and the community sensitized the student population to the depth of social ills.

Remaining Independent The fight against being consumed by the University of Maryland (UMD) remained a threat to Morgan during the Jenkins years. In March 1951, Carl Murphy wrote Board Chairman Soper about a bill drawn up by UMD President Harry Clifton “Curley” Byrd, which proposed separation of the races in higher education. Byrd proffered that Morgan become a University of Maryland satellite campus under his control. Morgan would be allowed to offer graduate degrees up to the Ph.D. level. This structure would allow UMD to become “integrated” in theory but not practice. Moreover, Byrd said that the state “wasted money” to improve the physical plant at Morgan and that the state would be better served by crafting a liberal arts college for the people of Baltimore City. An information tract about the matter was published in 1948 by the Citizens Committee on Higher Education, coordinated by Carl Murphy and Willard W. Allen. The document urged people to organize fraternal, church and community groups to

speak against Byrd’s plan to local and state representatives. “Let no citizen or public official vote wrong for lack of information as to the funds needed to bring Morgan State College and other schools up to the standard provided by the state for other citizens,” it stated. Jenkins responded on March 5 to Perry O. Wilkinson, chairman of the Education Committee of the Maryland House of Delegates: “…my chief concerns are that young Negro men and women of our state be given a fair chance at the level of higher education fully to develop themselves so that they might be of optimum service to the state and the nation…. It is my sincere hope that the question of higher education of Negroes will be decided in a statesmanlike manner with a view to the welfare of the state and the nation rather than in the light of narrow political considerations.” Jenkins challenged the separation of the races in the proposed legislation as anachronistic. “Morgan should continue to occupy its present place in the program of higher education in the state. It should remain under the control of its present (Board) which is universally recognized to have done an excellent job. The college receives less financial support than any comparable institution in the state. In accordance with the recommendations of every commission which has studied the question, the college should receive greatly increased financial support and its physical plant should be built up to standard level.” Jenkins explained in detail the legal challenges to “separate but equal” in higher education. He inferred to Wilkinson the cost of establishing separate facilities for black students. Jenkins and Murphy were the first black top leadership team at Morgan. Murphy died in 1967, and Jenkins retired in 1970.

Preserving a Civil Rights Legacy The Lillie Carroll Jackson Civil Rights Museum By Iris Leigh Barnes, MSU Class of 2012 In an article published on Aug. 21, 1999, the Baltimore Sun lauded the late Lillie May Carroll Jackson’s more than three decades of service as president of the Baltimore Branch of the NAACP: “The successful struggle for civil rights in Maryland was a defining achievement of this century. Lillie Carroll Jackson was a key general in that battle.” Jackson was named by the newspaper as one of its “Marylanders of the Century.” Nearly a half-century earlier, on May 6, 1950, the Baltimore Afro-American had called Jackson a “brilliant organizer” and “tireless public servant for her work in making the Baltimore branch of the NAACP the largest in the country, which has to its credit the largest number of important legal victories.” Under her leadership, from 1935 to 1970, the Baltimore Branch grew to approximately 18,000 members. Jackson’s daughter, Juanita Jackson Mitchell, a Morgan alumnus, continued the family’s record of civil rights achievement. After graduating from the University of Maryland School of Law in 1950, she became the first black woman to practice law in the state. She championed school desegregation in Baltimore, served as counsel in suits to eliminate segregation throughout Maryland and won several lawsuits in the U.S. Supreme Court. Her husband, Clarence Mitchell Jr., the legendary “101st U.S. senator,” served as director of the Washington Bureau of the NAACP and lobbied successfully for national civil rights legislation while working beside three U.S. presidents. Lillie Carroll Jackson wanted all people to know the history of the struggle for freedom and equality in the United States. She declared that her home should be a civil rights museum. In 1978, the Jackson-Mitchell family made her dream a reality. Morgan State University, which shared the vision, acquired the museum in 1996. The University transformed the structure into a modern museum and reopened its doors on June 11, 2016. The museum has an adjacent Resource Center for researchers interested in the civil rights movement in Baltimore and nationwide. The Lillie Carroll Jackson Civil Rights Museum also provides hands-on experience for students in MSU’s Museum Studies and History departments. 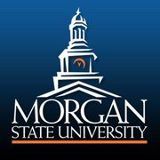