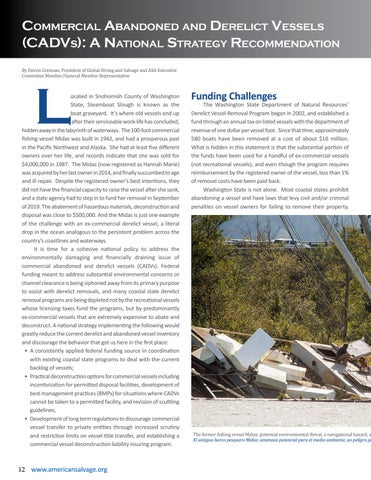 ocated in Snohomish County of Washington State, Steamboat Slough is known as the boat graveyard. It’s where old vessels end up after their serviceable work-life has concluded, hidden away in the labyrinth of waterways. The 100-foot commercial fishing vessel Midas was built in 1942, and had a prosperous past in the Pacific Northwest and Alaska. She had at least five different owners over her life, and records indicate that she was sold for $4,000,000 in 1987. The Midas (now registered as Hannah Marie) was acquired by her last owner in 2014, and finally succumbed to age and ill repair. Despite the registered owner’s best intentions, they did not have the financial capacity to raise the vessel after she sank, and a state agency had to step in to fund her removal in September of 2019. The abatement of hazardous materials, deconstruction and disposal was close to $500,000. And the Midas is just one example of the challenge with an ex-commercial derelict vessel, a literal drop in the ocean analogous to the persistent problem across the country’s coastlines and waterways. It is time for a cohesive national policy to address the environmentally damaging and financially draining issue of commercial abandoned and derelict vessels (CADVs). Federal funding meant to address substantial environmental concerns or channel clearance is being siphoned away from its primary purpose to assist with derelict removals, and many coastal state derelict removal programs are being depleted not by the recreational vessels whose licensing taxes fund the programs, but by predominantly ex-commercial vessels that are extremely expensive to abate and deconstruct. A national strategy implementing the following would greatly reduce the current derelict and abandoned vessel inventory and discourage the behavior that got us here in the first place: • A consistently applied federal funding source in coordination with existing coastal state programs to deal with the current backlog of vessels; • Practical deconstruction options for commercial vessels including incentivization for permitted disposal facilities, development of best management practices (BMPs) for situations where CADVs cannot be taken to a permitted facility, and revision of scuttling guidelines; • Development of long term regulations to discourage commercial vessel transfer to private entities through increased scrutiny and restrictive limits on vessel title transfer, and establishing a commercial vessel deconstruction liability insuring program.

The Washington State Department of Natural Resources’ Derelict Vessel Removal Program began in 2002, and established a fund through an annual tax on listed vessels with the department of revenue of one dollar per vessel foot. Since that time, approximately 580 boats have been removed at a cost of about $16 million. What is hidden in this statement is that the substantial portion of the funds have been used for a handful of ex-commercial vessels (not recreational vessels), and even though the program requires reimbursement by the registered owner of the vessel, less than 1% of removal costs have been paid back. Washington State is not alone. Most coastal states prohibit abandoning a vessel and have laws that levy civil and/or criminal penalties on vessel owners for failing to remove their property. 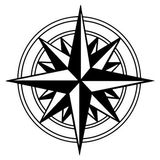 Soundings is published for the American Salvage Association to deliver the latest news on the marine salvage industry. asamcc@americansalv...

Soundings is published for the American Salvage Association to deliver the latest news on the marine salvage industry. asamcc@americansalv...