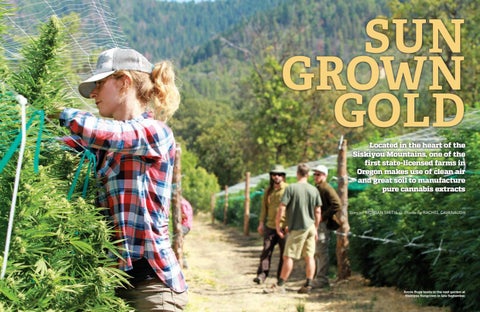 SUN GROWN GOLD Located in the heart of the Siskiyou Mountains, one of the first state-licensed farms in Oregon makes use of clean air and great soil to manufacture pure cannabis extracts Story by

Annie Rupp tends to the vast garden at Siskiyou Sungrown in late September.

implicity is often overlooked in an industry where growers spend millions of dollars on high-tech lights, commercial HVAC systems and complex automat-

ed electronics. “People are making it too complicated,” says Michael Johnson, the chief operating officer of Siskiyou Sungrown. “If you bring it back to agriculture — which has been going on for a long, long time — the playbook is there. There aren’t a lot of tricks that we pull; if you can start with good land, earth, soil and water, you are 80% of the way there.” It’s a minimalist approach that owners Cedar and Madrone Grey live by and carry through in every facet of their business. “Indoor cannabis can be grown anywhere, but we’re dedicated to using the native soil and sun and growing with the most sustainable methods that we can,” says Cedar Grey, who is also the past president of the Oregon Sungrown Growers’ Guild. When Grey moved to southwest Oregon 20 years ago, he wasn’t originally planning on getting involved in the cannabis industry. But he realized the region’s ideal climate and began looking at business opportunities as the state embraced some of the most progressive marijuana laws in the nation. In 2000, the Greys started growing under the Oregon Medical Marijuana Program and became increasingly inspired by the medical benefits of cannabis. “Rather than chasing the fads and trying to be the next new shiny thing, Cedar and Madrone have stuck to their principles,” Johnson says. “To me, that’s a very powerful thing. They’ve gotten hundreds, if not thousands, of loyal customers all around the state and people that recognize the integrity of the brand and the integrity of the product.” STARTING STRONG Grey’s engineering degree provided a strong foundation for jumping head-first into the cannabis market. His experience gave him the ability to analyze problems and find effective solutions, but it was his passion for science that drove him to create a company dedicated to producing an all-natural, medically beneficial product. Three years ago, Siskiyou Sungrown be-

gan manufacturing its first concentrates, which would eventually become the company’s signature product — an ultra-pure, resinous cannabis oil. Grey experimented with oil production methods for a year, tweaking the dehydration, extraction, filtration and distillation processes. “The primary way we’ve differentiated ourselves is the quality,” Grey says. “Our methods don’t produce the highest yield, but they do produce the highest quality. I haven’t tried any other brand of RSO, but it sounds very clear after talking to patients, dispensary owners and budtenders that

once people try our oil, they stick with it. From what I’m told, it has a taste and clarity that’s unrivaled.” The Greys take monthly four-day sales trips to Portland and the Willamette Valley to restock dispensaries and visit new outlets — precious time together as husband and wife, away from their four children at home. When the company started to expand beyond a mom-and-pop operation, Grey reached out to Johnson. The two previously worked together as members of the Sungrown Growers’ Guild when Johnson managed a local dispensary. Johnson joined the Siskiyou Sungrown

INDOOR CANNABIS CAN BE GROWN ANYWHERE, BUT WE’RE DEDICATED TO USING THE NATIVE SOIL AND SUN AND GROWING WITH THE MOST SUSTAINABLE METHODS THAT WE CAN.

Siskiyou Sungrown follows the simple path of traditional farming toward success, with clean air, pristine water and quality soil as the most important components.

team as COO in March 2016, and initially focused his efforts on building a strong team to handle the workload. Siskiyou Sungrown has 10-15 employees in pre- and post-harvest months to maintain the farm’s drip irrigation system and its hydroelectric power source. During harvest, nearly 30 employees quickly cut and weigh 1,100 plants in a few short weeks. “I see my role as synthesizing all of these wonderful people,” Johnson says. “We have a crew of brilliant folks with unique focuses and skillsets, but when we have a clear idea of where we want to go and we work well together, we can really accomplish a lot.” Johnson is also in charge of licensing and

compliance for both the recreational and medicinal sides of the operation. He alternates between thinking about the business in macro and micro levels; he’ll often shift from outlining a five-year plan to double-checking the water’s pH balance from one minute to the next. “If you don’t know how to bring it down to the micro level and have clear, tangible steps of how to get there, it’s just day dreaming,” Johnson says. “You have to have a blend of both.” ‘OLD-SCHOOL AGRICULTURE’ Siskiyou Sungrown operates on 10 acres of land at 2,000 feet elevation in Williams, an unincorporated community in Josephine County that represents the epicenter of Oregon’s medical marijuana production. The town covers less than 80 square miles, but more than 400 of its 2,000 residents were registered medical cannabis growers in 2011, according to an Associated Press report. Much of the region’s draw for growers is the excellent climate and abundant natural resources. Grey says it’s “one of the best cannabis growing regions in the world” with its top-notch soil, long and dry Mediterranean sum-

mers, and the close proximity to thousands of acres of unadulterated wilderness. “There are very few recreational producers in the country who use native soil, but we plant right into it,” says Johnson, who describes cannabis cultivation as becoming “gluttonous” due to labor intensity, high costs and unreliable tracking efforts. “We wanted to change the paradigm,” he says. “We wanted to go back to old school agriculture.” In addition to using the natural biology of the soil to boost plant vitality, Siskiyou Sungrown practices companion planting to enhance plant growth, suppress pests, reduce disease and recruit beneficial insects. “It’s a joy to work in organic agriculture,” says Grey, who spent most of his childhood on a small country ranch in southwest Washington. “Everything is natural and healthy, and there isn’t a product that isn’t safe for us to be around. That safety carries through all the way to the consumer.” DOWN TO BUSINESS Within the medical market, cannabis oil accounts for two-thirds of

Siskiyou Sungrown’s sales. The rest of its sales come from flower products, and the company hasn’t spent any money on marketing. They haven’t spent a dime on marketing. “Our product sells itself pretty well,” Grey says. “When people try our brand they stick with it.” He says dispensaries often call in orders due to customers requesting Siskiyou Sungrown’s medicinal products. But as the company expands into the recreational market, its marketing needs will likely change, especially with the introduction of a Siskiyou Sungrown-branded cannabis powder. “We’re working with a chemist who has been able to bind oil into powder, so we’re going to be offering standardized dosages of capsulized powder which will be very easy for people to take,” Grey explains. That chemist is Mike Barnhart, a Siskiyou Sungrown partner and owner of Plant Science Laboratories in Buffalo, New York. “My contribution here is to take guesswork out of agriculture and bring science into it,” says Barnhart, who visits the farm nearly every month and is helping to build a full-scale extraction laboratory that is capable of producing a few pounds of extract per day. Barnhart got involved with the cannabis industry after his sister recommended he try cannabis oil on a spider bite about three

years ago. He found the results of cannabis oil couldn’t be replicated by any other products, and he discovered the Siskiyou Sungrown brand while looking to restock his supply of oil. Barnhart hunted down Grey, and offered his science-based expertise. Eventually, the company plans to expand into hemp cultivation and hemp-based CBD products. With Oregon relaxing its hemp laws, Grey says more acreage can be planted with a lower level of regulation. While the marijuana markets are overseen by the Department of Health and Liquor Control Commission, hemp cultivation is regulated by the Department of Agriculture. “The way that federal regulations are evolving, it’s becoming possible to export hemp-derived CBD products out of Oregon and so we see this as the next horizon expansion into the hemp and CBD market,” Grey says. While navigating the complex and ever-changing regulatory environment have been the most challenging part for Grey, the results make it worthwhile. “I understand that if I didn’t like this, I could wait a few years for the industry to mature and regulations to be worked out, and then try to find my place in the industry,” he says. “But I’m passionate about it, and I’m happy to be a pioneer.” n

Farmworkers Annie Rupp and Christina Swenson can barely be seen amid the farmâ&#x20AC;&#x2122;s forest of cannabis.

Nial Jacobson operates a chop saw at the Williams, Oregon farm. At right, a blooming flower speckled with white and pink pistils. 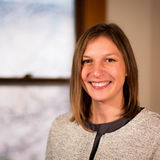 Located in the heart of the Siskiyou Mountains, one of the first state-licensed farms in Oregon makes use of clean air and great soil to man...

Located in the heart of the Siskiyou Mountains, one of the first state-licensed farms in Oregon makes use of clean air and great soil to man...