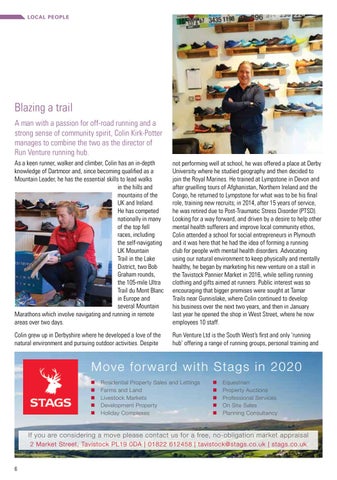 Blazing a trail A man with a passion for off-road running and a strong sense of community spirit, Colin Kirk-Potter manages to combine the two as the director of Run Venture running hub. As a keen runner, walker and climber, Colin has an in-depth knowledge of Dartmoor and, since becoming qualified as a Mountain Leader, he has the essential skills to lead walks in the hills and mountains of the UK and Ireland. He has competed nationally in many of the top fell races, including the self-navigating UK Mountain Trail in the Lake District, two Bob Graham rounds, the 105-mile Ultra Trail du Mont Blanc in Europe and several Mountain Marathons which involve navigating and running in remote areas over two days.

not performing well at school, he was offered a place at Derby University where he studied geography and then decided to join the Royal Marines. He trained at Lympstone in Devon and after gruelling tours of Afghanistan, Northern Ireland and the Congo, he returned to Lympstone for what was to be his final role, training new recruits; in 2014, after 15 years of service, he was retired due to Post-Traumatic Stress Disorder (PTSD). Looking for a way forward, and driven by a desire to help other mental health sufferers and improve local community ethos, Colin attended a school for social entrepreneurs in Plymouth and it was here that he had the idea of forming a running club for people with mental health disorders. Advocating using our natural environment to keep physically and mentally healthy, he began by marketing his new venture on a stall in the Tavistock Pannier Market in 2016, while selling running clothing and gifts aimed at runners. Public interest was so encouraging that bigger premises were sought at Tamar Trails near Gunnislake, where Colin continued to develop his business over the next two years, and then in January last year he opened the shop in West Street, where he now employees 10 staff.

Colin grew up in Derbyshire where he developed a love of the natural environment and pursuing outdoor activities. Despite

Run Venture Ltd is the South West’s first and only ‘running hub’ offering a range of running groups, personal training and

If you are considering a move please contact us for a free, no-obligation market appraisal 2 Market Street, Tavistock PL19 0DA | 01822 612458 | tavistock@stags.co.uk | stags.co.uk

Delivered by the Royal Mail to 9,000 homes and businesses in PL19 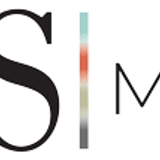