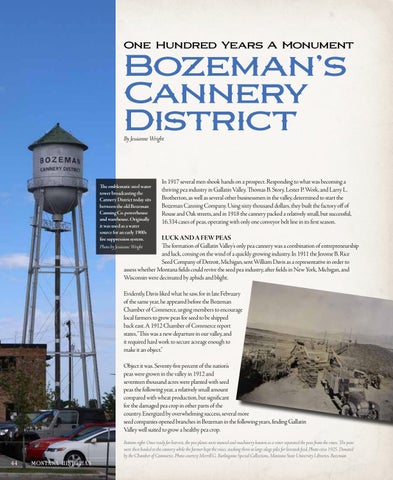 One Hundred Years A Monument

The emblematic steel water tower broadcasting the Cannery District today sits between the old Bozeman Canning Co. powerhouse and warehouse. Originally it was used as a water source for an early 1900s fire suppression system. Photo by Jessianne Wright

In 1917 several men shook hands on a prospect. Responding to what was becoming a thriving pea industry in Gallatin Valley, Thomas B. Story, Lester P. Work, and Larry L. Brotherton, as well as several other businessmen in the valley, determined to start the Bozeman Canning Company. Using sixty thousand dollars, they built the factory off of Rouse and Oak streets, and in 1918 the cannery packed a relatively small, but successful, 16,334 cases of peas, operating with only one conveyor belt line in its first season.

LUCK AND A FEW PEAS The formation of Gallatin Valley’s only pea cannery was a combination of entrepreneurship and luck, coming on the wind of a quickly growing industry. In 1911 the Jerome B. Rice Seed Company of Detroit, Michigan, sent William Davis as a representative in order to assess whether Montana fields could revive the seed pea industry, after fields in New York, Michigan, and Wisconsin were decimated by aphids and blight. Evidently, Davis liked what he saw, for in late February of the same year, he appeared before the Bozeman Chamber of Commerce, urging members to encourage local farmers to grow peas for seed to be shipped back east. A 1912 Chamber of Commerce report states,“This was a new departure in our valley, and it required hard work to secure acreage enough to make it an object.” Object it was. Seventy-five percent of the nation’s peas were grown in the valley in 1912 and seventeen thousand acres were planted with seed peas the following year, a relatively small amount compared with wheat production, but significant for the damaged pea crop in other parts of the country. Energized by overwhelming success, several more seed companies opened branches in Bozeman in the following years, finding Gallatin Valley well suited to grow a healthy pea crop.

Bottom right: Once ready for harvest, the pea plants were mowed and machinery known as a viner separated the peas from the vines. The peas were then hauled to the cannery while the farmer kept the vines, stacking them in large silage piles for livestock feed. Photo circa 1925. Donated by the Chamber of Commerce. Photo courtesy Merrill G. Burlingame Special Collections, Montana State University Libraries, Bozeman The Montana Historian illuminates the colorful histories whose panorama shape this unique place. From ghost town barstools to the early trai...

The Montana Historian illuminates the colorful histories whose panorama shape this unique place. From ghost town barstools to the early trai...