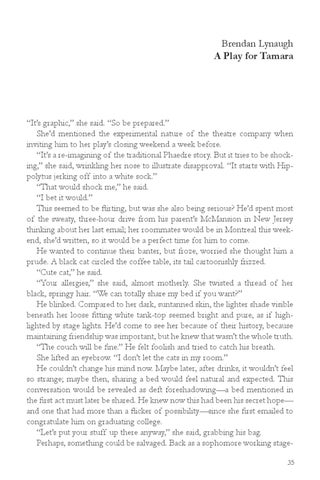 Brendan Lynaugh A Play for Tamara

“It’s graphic,” she said. “So be prepared.” She’d mentioned the experimental nature of the theatre company when inviting him to her play’s closing weekend a week before. “It’s a re-imagining of the traditional Phaedre story. But it tries to be shocking,” she said, wrinkling her nose to illustrate disapproval. “It starts with Hippolytus jerking off into a white sock.” “That would shock me,” he said. “I bet it would.” This seemed to be flirting, but was she also being serious? He’d spent most of the sweaty, three-hour drive from his parent’s McMansion in New Jersey thinking about her last email; her roommates would be in Montreal this weekend, she’d written, so it would be a perfect time for him to come. He wanted to continue their banter, but froze, worried she thought him a prude. A black cat circled the coffee table, its tail cartoonishly frizzed. “Cute cat,” he said. “Your allergies,” she said, almost motherly. She twisted a thread of her black, springy hair. “We can totally share my bed if you want?” He blinked. Compared to her dark, suntanned skin, the lighter shade visible beneath her loose fitting white tank-top seemed bright and pure, as if highlighted by stage lights. He’d come to see her because of their history, because maintaining friendship was important, but he knew that wasn’t the whole truth. “The couch will be fine.” He felt foolish and tried to catch his breath. She lifted an eyebrow. “I don’t let the cats in my room.” He couldn’t change his mind now. Maybe later, after drinks, it wouldn’t feel so strange; maybe then, sharing a bed would feel natural and expected. This conversation would be revealed as deft foreshadowing—a bed mentioned in the first act must later be shared. He knew now this had been his secret hope— and one that had more than a flicker of possibility—since she first emailed to congratulate him on graduating college. “Let’s put your stuff up there anyway,” she said, grabbing his bag. Perhaps, something could be salvaged. Back as a sophomore working stage35

Issue 8 of the Monongahela Review 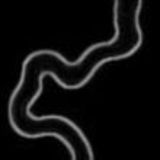